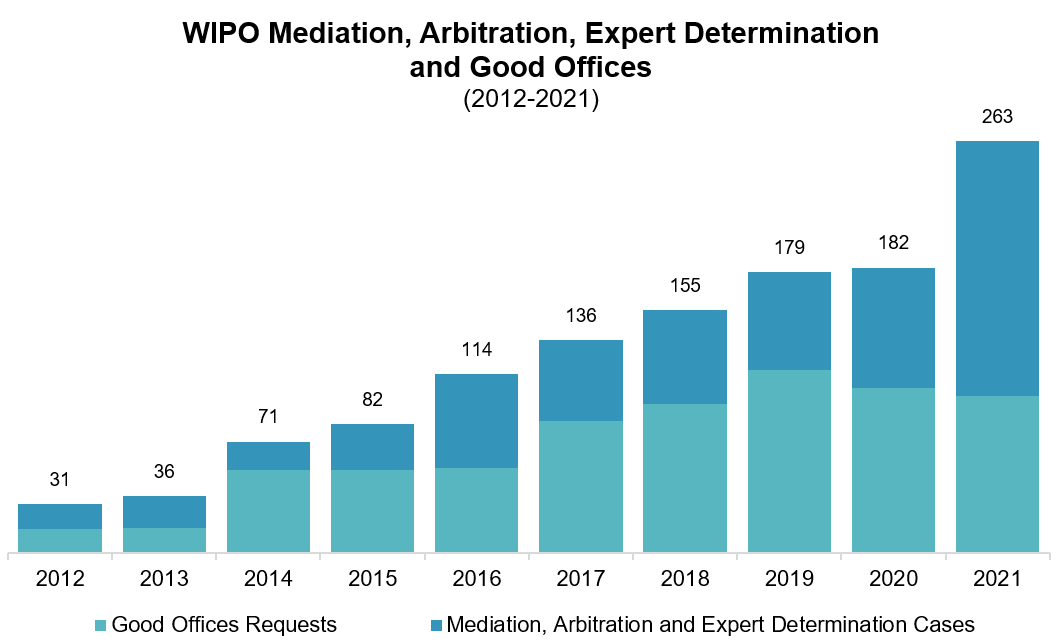 The WIPO Arbitration and Mediation Center has administered nearly 900 mediation, arbitration and expert determination (together, WIPO ADR) cases. As the table covering the period 2012-2021 shows, most of these cases were filed in recent years.

WIPO ADR cases were predominately based on contract clauses; however, some cases were submitted to WIPO ADR as a result of a submission agreement concluded after the dispute had arisen (some of these following WIPO Good Offices as described below, including disputes pending before national courts).

In addition, the WIPO Center regularly provides procedural guidance to parties in order to facilitate their direct settlement, or the submission of their existing dispute to WIPO ADR.

The WIPO Center has assisted parties in over 750 "Good Offices" requests (some of these are followed by WIPO ADR proceedings) based in different jurisdictions from all regions of the world.

WIPO ADR cases usually arise in the context of the following types of disputes:

Amounts in dispute in WIPO ADR cases have varied from USD 15,000 to 1 billion.

The remedies claimed in WIPO mediation and arbitration proceedings have included: damages, infringement declarations and specific performance, such as a declaration of non-performance of contractual obligations, or of infringement of rights, further safeguards for the preservation of confidentiality of evidence, the provision of a security, the production of data, the delivery of goods and the conclusion of new contracts (including determination of licensing terms).

WIPO ADR procedures seek to create positive opportunities for party settlement. To date, 70% of WIPO mediation and 33% of WIPO arbitration cases have concluded in a settlement between the parties. In 2021, as a result of the increasing use of WIPO Online Case Administration Tools, the WIPO Center observed a settlement rate in mediation cases of 75%. 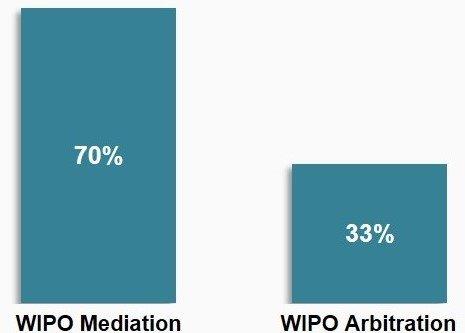 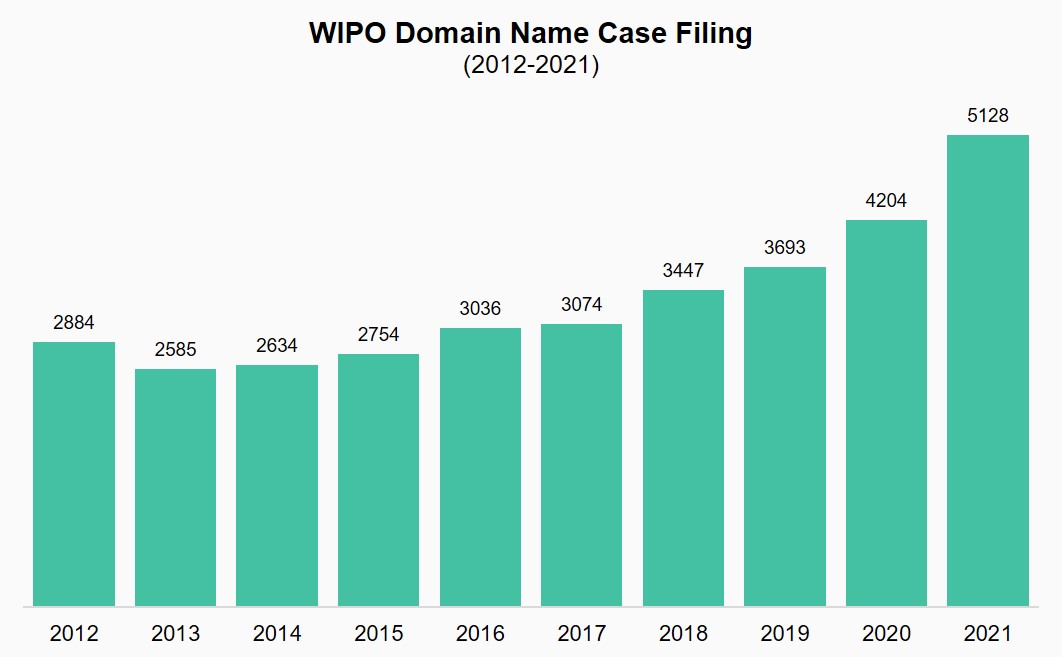 WIPO Center has administered over 57,000 cases under the Uniform Domain Name Dispute Resolution Policy (UDRP) and related policies. Together, these proceedings have involved parties from 183 countries and over 100,000 Internet domain names. The WIPO Center provides a full range of statistics concerning WIPO domain name cases (e.g., case outcomes and languages, complainant industries, and geographical distribution of parties) on its website. Impact of Changes to Availability of WhoIs Data on the UDRP and the WIPO Overview of WIPO Panel Views on Selected UDRP Questions, Third Edition are also available online.

The UDRP applies primarily to international domains such as .com, .net, .org, .top, .win and .xyz. In addition, over 80 country code top-level domains (ccTLDs) have appointed the WIPO Center as service provider for managing domain name disputes in their respective ccTLD. The WIPO Center has published a Guide to WIPO’s services for country code top-level domain registries.

Apart from UDRP cases the Center has administered over 15,000 cases under Sunrise policies relating to registrations in the start-up phase of new domains and has received 69 cases filed under the ICANN Legal Rights Objection mechanism for new gTLDs.