An International Survey on Dispute Resolution in Technology Transactions conducted by the WIPO Arbitration and Mediation Center reveals that less than 2% of technology agreements lead to formal dispute proceedings, but that these proceedings are generally costly and time-consuming. 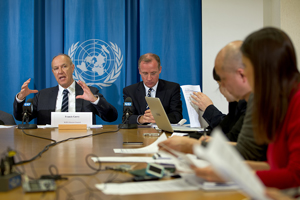 The survey report presents the practices and motivation of almost 400 survey respondents from over 60 countries, and assesses the current use and comparative merits of Alternative Dispute Resolution (ADR) methods for resolving technology-related disputes. The survey report also offers observations on dispute resolution best practices based on analysis of the data compiled and interviews conducted with the survey.

“The survey confirms that parties to technology-related agreements are worried about the high costs and lengthy timelines of disputes, especially in an international context,” said WIPO Director General Francis Gurry. “While court litigation remains the default path, survey responses indicate that ADR offers attractive options in terms of cost and time, as well as enforceability, quality of outcome, and confidentiality,” he said.

The survey conducted by the WIPO Center captured a global assessment of technology disputes and ADR, in particular mediation and arbitration, by comparison to court litigation. The survey respondents are based in Europe, North America, Asia, South America, Oceania, the Caribbean and Central America, and Africa (in order of number of responses received), working for law firms, corporations, research organizations and universities, and government bodies, or self-employed.

) For contractual as well as non-contractual disputes, patent issues arose nearly twice as often as copyright or know-how issues.

As their number one priority when negotiating a dispute process, respondents identified costs, followed, in close connection, by time. Enforceability ranked as a further consideration among users of court litigation and arbitration clauses. Factors following at some distance included quality of outcome, neutral forum, confidentiality and desire for a business solution. (Annex 3

Survey responses show the most common mechanism used to resolve disputes to be court litigation in respondents’ home jurisdiction, followed by court litigation in a foreign jurisdiction, and then by the ADR mechanisms of arbitration, mediation, expedited arbitration, and expert determination. Responses also show a divergence between the indicated top priorities of cost and time on the one hand and the means employed to resolve disputes on the other hand, where respondents typically spent more time and incurred significantly higher costs in court litigation than in arbitration and mediation. (Annex 4

The survey report also translates the responses into a number of observations that may assist parties’ adoption of informed dispute resolution policies.

In 2012, trademark holders filed a record 2,884 cybersquatting cases covering 5,084 Internet domain names with the WIPO Center under procedures based on the Uniform Domain Name Dispute Resolution Policy (UDRP). This represents an increase of 4.5% over the record established in 2011. (Annex 5

Since the UDRP’s launch in December 1999, the WIPO Center has received over 25,500 UDRP based cases, covering some 47,000 domain names in both generic and country code Top Level Domains (gTLDs, ccTLDs).

The international reach of Internet commerce is reflected in the diversity of the domain name disputes filed with the WIPO Center in 2012. Those cases include complainants and respondents from 120 countries, ten countries more than the 2011 WIPO caseload. (Annex 6

Among WIPO cases in 2012, ccTLDs accounted for almost 12% of filings, with 67 national domain registries now connected to WIPO domain name dispute resolution services. In 2012, the WIPO Center became a provider for the .TZ (Tanzania) and .PW (Palau) domain spaces.

The top three areas of complainant activity in 2012 were retail, fashion and banking and finance. (Annex 8

) The caseload featured many well-known names from business as well as public interest sectors. (Annex 9

) Of the gTLD cases filed with WIPO in 2012, three quarters (74.8%) concerned registrations in the .com domain. The increased filings related to fashion and luxury brands reflect in part a growth in the number of cases filed by brand owners alleging counterfeiting via the web pages offered under the disputed domain name.

Parties settled around one out of five WIPO cases before reaching panel decision. Applying UDRP jurisprudence, WIPO panels in 2012 found evidence of cybersquatting in 91% of all decided cases.

Parties to cybersquatting disputes filed with WIPO took advantage of user-friendly online facilities such as the paperless eUDRP, the Legal Index of WIPO UDRP Decisions, and the Overview of WIPO Panel Views on Selected UDRP Questions to assist their case preparation and submission.

During 2012, a variety of organizations and companies submitted to the Internet Corporation for Assigned Names and Numbers (ICANN) over 1,930 applications for some 1,400 distinct new domains as part of ICANN’s New gTLD Program. This included 116 applications for a total of 12 different language scripts using the Internationalized Domain Name (IDN) system. ICANN expects the first new domains to become operational in the course of the present year.

WIPO’s commitment to cost- and time-effective dispute resolution in the new gTLDs is reflected by its development and administration of the so-called pre-delegation Legal Rights Objections (LRO) procedure, which seeks to safeguard third-party trademark rights corresponding to the applied-for domains. By the ICANN-established deadline of March 13 of this year, parties had filed 71 LRO cases with WIPO. To facilitate these cases, the WIPO Center as the exclusive service provider has made available extensive party resources. (Annex 10

For those Objections found procedurally compliant under applicable rules, the WIPO Center posts the name of the Objector and the Applicant together with the name of the challenged domain. Unless the parties settle their LRO case, it will be decided by one or three persons to be appointed from a WIPO list of experts. Their decisions will be conveyed to ICANN as an Expert Determination to be implemented within ICANN’s own process. LRO cases in principle are expected to be completed by October of this year.

To supplement the pre-delegation mechanism, the WIPO Center furthermore proposed to ICANN a post-delegation mechanism to encourage responsible registry operator conduct once a domain has become operational. This new mechanism should couple trademark protection standards with realistic safe harbors.

“Irrespective of the availability of the pre- and post-delegation mechanisms, it is also important to maintain reliable, cost- and time-efficient alternatives to court litigation like the UDRP for second-level registrations in these new domain spaces,” Mr. Gurry said.

The WIPO Center administers technology and other intellectual property disputes under the WIPO Mediation, Arbitration, and Expedited Arbitration Rules. By December 2012, the WIPO Center had administered 285 such cases, most of them received in the last five years. Cases were filed by large companies, small- and medium-sized enterprises, research organizations and universities. As of 2012, the Center offers a 25% discount on case registration and administration fees where a party to a dispute is named as applicant or inventor in a published Patent Cooperation Treaty (PCT) application.

As part of the WIPO ADR Services for Specific Sectors, the WIPO Center offers services to Intellectual Property Offices (IPOs) in their establishment of optional dispute resolution frameworks. Such collaboration, which also includes training programs and case administration, aims to provide cost-effective and flexible options for parties to resolve their disputes before IPOs in relation to pending or granted rights.

Following the establishment of a joint dispute resolution procedure to facilitate the mediation of trademark oppositions at the Intellectual Property Office of Singapore (IPOS), 2012 saw the first such mediation cases successfully settled. The WIPO Center is collaborating in the development of a similar mediation option for trademark proceedings before the Brazilian National Institute of Industrial Property (INPI-BR). INPI-BR has designated the WIPO Center as the administrator of such mediation cases where one or both parties are domiciled outside Brazil.

Background on the WIPO Arbitration and Mediation Center

Based in Geneva, Switzerland, with an office in Singapore, the WIPO Arbitration and Mediation Center offers Alternative Dispute Resolution options for the resolution of international commercial disputes between private parties. Developed by leading experts in cross-border dispute settlement, the arbitration, mediation and expert determination procedures provided by the WIPO Center are recognized as particularly appropriate for technology, entertainment and other disputes involving intellectual property.

The WIPO Center is committed to understanding user needs. Its International Survey on Dispute Resolution in Technology Transactions has brought the WIPO Center closer to the expectations of parties in technology-related disputes. Parties to disputes submitted to the WIPO Center have the option of using the innovative WIPO Electronic Case Facility (WIPO ECAF), which allows for secure filing, storing and retrieval of case-related submissions in a web-based electronic case file, by parties and neutrals anywhere in the world. A policy example of the WIPO Center’s focus on customer needs is its input into ICANN’s adoption of certain rights protection mechanisms in the context of its planned expansion of the Internet Domain Name System.

Background on the UDRP

The Uniform Domain Name Dispute Resolution Policy (UDRP), which was proposed by WIPO in 1999 and has become accepted as an international standard for resolving domain name disputes outside the courts, is designed specifically to discourage and resolve the abusive registration of trademarks as domain names, commonly known as cybersquatting. Under the UDRP, a complainant must demonstrate that the disputed domain name is identical or confusingly similar to its trademark, that the respondent does not have a right or legitimate interest in the domain name and that the respondent registered and uses the domain name in bad faith.

Disputes are decided by independent panelists drawn from the WIPO Center’s global list of trademark specialists. The domain name registration in question is frozen (suspended) during the proceedings. After reviewing a case, panelists submit their decision within a period of 14 days. If a panelist’s decision to transfer a domain name is not challenged in a competent court within a period of ten business days, the registrar is legally bound to implement the panelist’s decision. The entire case normally takes no more than about two months.

The WIPO Center is the leading global provider of domain name dispute resolution services and provides a range of resources for users and the general public. An illustration of these resources is the freely available WIPO jurisprudential Overview, which provides a distillation of panel findings in the thousands of domain name cases filed with WIPO. Parties, counsel and others around the world use this unique WIPO tool to find their bearings in the growing cybersquatting jurisprudence.