Results of the International Survey on Dispute Resolution in Technology Transactions

The World Intellectual Property Organization’s (WIPO) Arbitration and Mediation Center (WIPO Center) designed the International Survey on Dispute Resolution in Technology Transactions (Survey) to assess the current use in technology-related disputes of Alternative Dispute Resolution (ADR) methods as compared to court litigation, including a qualitative evaluation of these dispute resolution options.

The results of this Survey provide a statistical basis to identify trends in the resolution of technology related disputes. Best practices emerge from the Survey which may help guide intellectual property (IP) stakeholders in their dispute resolution strategies and this Report concludes with a number of observations relevant to such strategies. The Survey Respondents’ needs identified also help inform the WIPO Center’s ADR services.

The Survey has been developed with the support of the International Association for the Protection of Intellectual Property (AIPPI), the Association of University Technology Managers (AUTM), the Fédération Internationale des Conseils en Propriété Industrielle (FICPI) and the Licensing Executives Society International (LESI) in collaboration with in-house counsel and external experts in technology disputes from different jurisdictions and business areas. Their collective experience with disputes is reflected in the content, scope and structure of the questionnaire; they also assisted in its distribution.

The core findings of the Survey are as follows.

2. Technology-related Agreements Concluded in the Past Two Years

Of the types of agreements listed in the Survey, Respondents concluded most frequently non disclosure agreements (NDA), followed by assignments, licenses, agreements on settlement of litigation, research and development (R&D) agreements and merger and acquisition (M&A) agreements.

The subject matter of such agreements related more often to patents than to know-how or copyright.

The choice of applicable law made in these agreements was influenced by the location of Respondent headquarters and the primary place of operations.

3. Agreements Leading Most Often to Disputes

Respondents were asked to estimate what percentage of the technology-related agreements they concluded led to disputes. As such agreements, the questionnaire listed, in this order, NDAs, R&D agreements, licenses, settlement agreements, M&A agreements and assignments.

The choice of arbitral institution broadly corresponds to the location of Respondent headquarters.

Cost and time are the principal considerations for Respondents when negotiating dispute resolution clauses, both in domestic and international agreements.

For international agreements, Respondents placed a higher value on enforceability and forum neutrality than they did for domestic transactions. 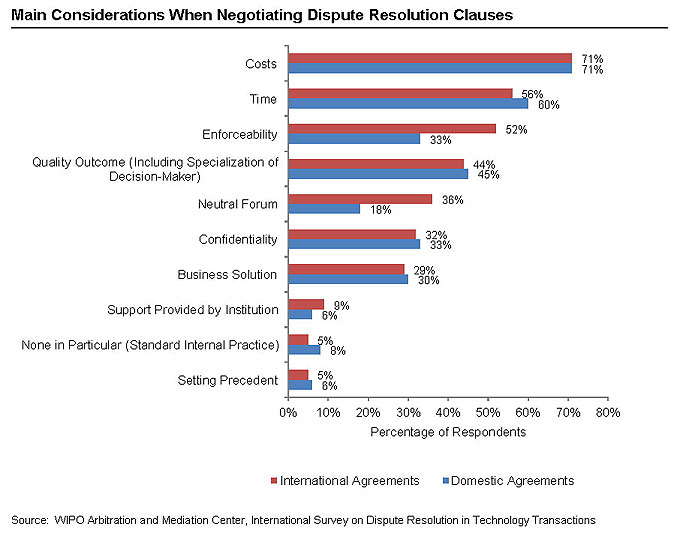 The main objectives of claimant parties in patent disputes were to obtain damages/royalties (78%), a declaration of patent infringement (74%), and/or injunctions (53%).

29% of Respondents indicated that they had submitted a dispute to mediation before or during court litigation involving contractual patent, copyright and/or know-how issues. 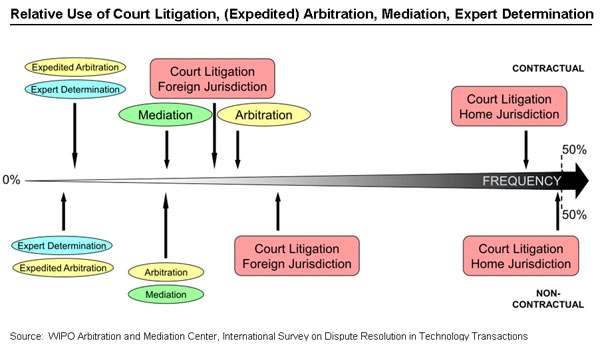 Respondents indicated that they spent more time and incurred significantly higher costs in court litigation than in arbitration and mediation.

Respondents indicated that mediation took on average 8 months, and 91% of Respondents stated that costs of mediation typically did not exceed USD 100,000.

Apart from monetary amounts, 25% of Respondents identified management time of business executives and wasted time of other participants in proceedings, lost productivity and lost business opportunities as costs incurred. 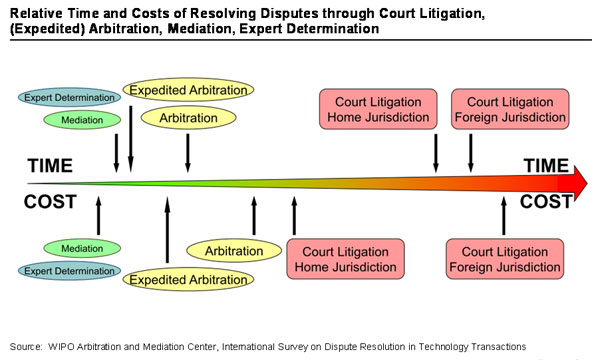