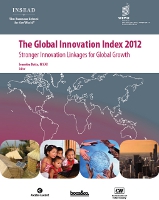 For the second year running, Switzerland, Sweden, and Singapore lead in overall innovation performance according to the Global Innovation Index 2012 (GII): Stronger Innovation Linkages for Global Growth, published by INSEAD, the leading international business school, and the World Intellectual Property Organization (WIPO), a specialized agency of the United Nations.

The report ranks 141 countries/economies on the basis of their innovation capabilities and results. It benefits from the experience of Knowledge Partners Alcatel-Lucent, Booz & Company, and the Confederation of Indian Industry (CII), as well as an Advisory Board of eleven international experts.

The study shows that the dynamics of innovation continue to be affected by the emergence of new successful innovators, as seen by the range of countries across continents in the top twenty GII ranking, as well as the good performances of emerging countries such as Latvia, Malaysia, China, Montenegro, Serbia, Republic of Moldova, Jordan, Ukraine, India, Mongolia, Armenia, Georgia, Namibia, Viet Nam, Swaziland, Paraguay, Ghana, Senegal; and low-income countries Kenya and Zimbabwe.

“The GII is a timely reminder that policies to promote innovation are critical to the debate on spurring sustainable economic growth,” WIPO Director General Francis Gurry said. “The downward pressure on investment in innovation exerted by the current crisis must be resisted. Otherwise we risk durable damage to countries’ productive capacities. This is the time for forward-looking policies to lay the foundations for future prosperity.”

The list of overall GII top 10 performers has changed little from last year. Switzerland, Sweden, and Singapore are followed in the top ten by Finland, the United Kingdom, the Netherlands, Denmark, Hong Kong (China), Ireland, and the United States of America. Canada is the only country leaving the top 10 this year, mirroring weakening positions on all main GII innovation input and output pillars. The report shows that the U.S.A. continues to be an innovation leader but also cites relative shortfalls in areas such as education, human resources and innovation outputs as causing a drop in its innovation ranking. 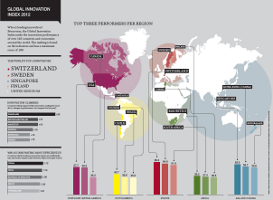 At a glance: Global Innovation Index 2012

Regional leaders in the overall GII and the BRIC countries

The leaders in their regions are: Switzerland in Europe, the US in Northern America, Singapore in South East Asia and Oceania, Israel in Northern Africa and Western Asia, Chile in Latin America and the Caribbean, India in Central and Southern Asia, and Mauritius in Sub-Saharan Africa. Among low-income economies the leader is Kenya.

Soumitra Dutta, Roland Berger Professor of Business and Technology at INSEAD and the founder of the GII noted, “The GII seeks to update and improve the way innovation is measured. Today’s definitions must capture an environment which is context-driven, problem-focused and interdisciplinary. The 2012 variables were broadened in an effort to find the right mix which captures innovation as it happens today.”

The report notes a need for the BRIC countries (Brazil, the Russian Federation, India, and China) to invest further in their innovation capabilities to live up to their expected potential. China’s performance on the key knowledge and technology outputs pillar is outpaced only by Switzerland, Sweden, Singapore, and Finland. However, the report notes that both China and India have weaknesses in their innovation infrastructure and environment. The report also notes that Brazil has suffered the largest drop among the BRICs.

“Innovation is becoming the spearhead of competition – at a regional level, on a national level, and for companies,” said Ben Verwaayen, CEO of Alcatel-Lucent. “How to deal with that challenge will determine the destiny of competiveness for all players.”

“Developed economies must continue to strengthen and develop linkages amongst stakeholders in the innovation landscape to stay ahead in strategic sectors,” said Per-Ola Karlsson, Senior Partner, Managing Director of Europe, Booz & Company. “Similarly, developing economies must institute a national model that establishes coherent linkages in their innovation systems. By aligning cross-cutting policies and coordinating the efforts of all stakeholders, these coherent linkages drive the innovation process.”

Chandrajit Banerjee, Director General, CII said, “Every country can aspire to be an innovation-driven economy. The more resource-constrained an economy is, the more prone to innovation it actually can be. Importantly, innovation is about acts which improve everyday lives and a journey towards faster-sustainable-inclusive-growth” 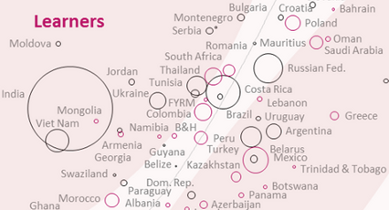 The Report highlights a multi-speed Europe, with innovation leaders in Northern and Western Europe, Eastern European and Baltic countries catching-up, and a Southern Europe that performs less well.

These middle- and low-income economies demonstrate rising levels of innovation achievement as a result of improvements in institutional frameworks, a skilled labour force, better innovation infrastructures, a deeper integration with global financial and other markets, and a sophisticated business community — even if progress in these dimensions is not uniform across all segments of the country.

“Innovation underperformers” are countries with weaknesses in their innovation systems. They include a mix of high-income as well as middle-income countries as shown in the chart above 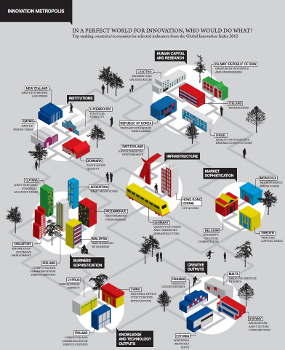 To support the global innovation debate, to guide polices and to highlight good practices, metrics are required to assess innovation and related policy performance. The Global Innovation Index (GII) helps to create an environment in which innovation factors are under continual evaluation, and it provides a key tool and a rich database of detailed metrics for refining innovation policies.

This is the fifth year the GII has been published, and the first in which INSEAD and WIPO are co-publishers. The Global Innovation Index (GII) project was launched by INSEAD in 2007 with the goal of determining how to find metrics and approaches to better capture the richness of innovation in society and go beyond such traditional measures of innovation as the number of research articles and the level of research and development (R&D) expenditures.

The GII 2012 is calculated as the average of two sub-indices and the Innovation Efficiency Index is the ratio of the two sub-indices, the Innovation Input Sub-Index gauges elements of the national economy which embodies innovative activities grouped in five pillars: (1) Institutions, (2) Human capital and research, (3) Infrastructure, (4) Market sophistication, and (5) Business sophistication. The Innovation Output Sub-Index captures actual evidence of innovation results, divided in two pillars: (6) Knowledge and technology outputs and (7) Creative outputs.

This year the GII innovates in two ways: First, for the first time, the GII includes a detailed analysis of the underlying factors influencing year-on-year changes in rankings. Second, the strengths/weaknesses of each economy are identified in the country profiles.

Moreover, while the GII report is a year over year performance assessment, it seeks to update/improve the way innovation is measured. For example, this year the Infrastructure pillar was reorganized to single out ecological sustainability in a new sub-pillar. In addition, online creativity was added to the ranking, including data on generic and country-code top level Internet domains, and also drawing on data from Wikipedia and YouTube.

The Report includes ten analytical chapters contributed by knowledge partners, Advisory Board members, and Google (by special invitation) to expose recent global innovation trends that can hardly be captured by traditional metrics. Four chapters are case studies on the Gulf Cooperation Council, Saudi Arabia, India, and the Russian Federation.

As one of the world’s leading and largest graduate business schools, INSEAD brings people, cultures and ideas from around the world together to change lives and to transform organisations. The 141 renowned Faculty members from 35 countries inspire more than 1,000 degree participants annually in the INSEAD MBA, Executive MBA and PhD programmes. In addition, more than 6,000 executives participate in INSEAD’s executive education programmes each year.

INSEAD conducts cutting edge research and innovates across all our programmes to provide business leaders with the knowledge and sensitivity to operate anywhere.

The World Intellectual Property Organization (WIPO) is the leading global forum for the promotion of intellectual property as a force for innovation and creativity to achieve positive change. A specialized agency of the United Nations, WIPO assists its 185 member states in developing a balanced international IP legal framework to meet society’s evolving needs. It provides business services for obtaining IP rights in multiple countries and resolving disputes. It delivers capacity-building programs to help developing countries benefit from using IP. And it provides free access to unique knowledge banks of IP information.