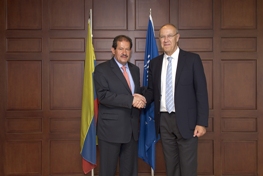 Colombia became the 87th member of the international trademark system following the deposit of its instrument of accession to the Madrid Protocol for the International Registration of Marks by Vice President Angelino Garzón with WIPO Director General Francis Gurry on May 29, 2012.   The treaty will enter into force with respect to Colombia, on August 29, 2012.  The Madrid System for the International Registration of Marks (Madrid system) offers trademark owners a cost effective, user friendly and streamlined means of protecting and managing their trademark portfolio internationally.

Colombia is the second country in the Latin American region to join the Madrid trademark filing system. Mr. Gurry welcomed Colombia’s accession as boding well for the further expansion of the Madrid system. “I am hopeful that other countries in the region will follow Colombia’s example,” he said, noting “The greater the geographical coverage of the Madrid system, the greater the benefits it offers to brand owners the world over.”  The Philippines recently acceded to the Madrid system and several countries - including India, Mexico and New Zealand - have completed domestic legislative processes to pave the way to accession.

Mr. Garzón said joining the international trademark system is a positive development for Colombia.  “We believe our accession to the Madrid Protocol will indeed serve as a useful tool to promote our economic development, taking in consideration the multiple advantages it offers,” he said. Mr. Garzón commended Colombia’s private sector, saying “This achievement has been possible thanks to the support of the Colombian private sector, which recognizes its benefits as an instrument to enhance the competitiveness of our enterprises, especially small and medium ones.”

The Madrid system is equally attractive to large businesses, as to small and medium-sized enterprises, which are the largest users of the system. Despite challenging economic conditions, 2011 saw the highest number of international trademark applications ever filed under the Madrid system, with 42,270 applications, or a 6.5 % increase compared to 2010.

Under the WIPO-administered Madrid system, a trademark owner may protect a mark in up to 86 countries plus the European Union with its Community Trade Mark (CTM) by filing one application, in one language (English, French or Spanish), with one set of fees, in one currency (Swiss Francs).  Applicants wishing to use the Madrid system must apply for trademark protection in a relevant national or regional trademark office before seeking international protection. An international registration under the Madrid system produces the same effects as an application for registration of the mark in each of the contracting parties designated by the applicant.

If protection is not refused by the trademark office of a designated contracting party, the status of the mark is the same as if it had been registered by that office.  Thereafter, the international registration can be maintained and renewed through a single procedure.  Thus, the system provides a cost-effective and efficient way for trademark holders to secure and maintain protection for their marks in multiple countries.