“The Madrid international trademark system enables individual businesses to protect their brands in line with their export strategies and provides excellent value for money. The recovery in Madrid system activity that we witnessed in 2010 was further consolidated in 2011, where a new record was established for the number of international trademark applications filed,” said WIPO Director General Francis Gurry. 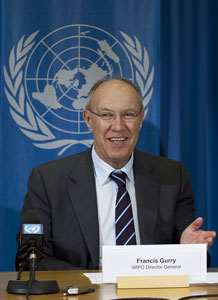 WIPO also recorded 21,754 international trademark renewals in 2011, reflecting the continued value that businesses place in their established brands, at a time when there is a level of uncertainty in the global economic situation.

International design activity also grew in 2011 with WIPO receiving 2,521 applications under the 59-member Hague Agreement Concerning the International Registration of Industrial Designs, or a 5.7% increase over the previous year.

The top ten filers remained unchanged from 2010. However, in 2011, the Office for Harmonization in the Internal Market (Trade Marks and Designs) (OHIM) overtook Germany as the largest source of filings, with some 5,859 international applications in 2011, which represented a 24.5% increase over 2010.

The top 10 most frequently designated members in 2011 remained the same as in 2010, namely China (18,724 designations), the EU, the United States of America, the Russian Federation, Switzerland, Japan, Australia, Republic of Korea, Turkey, and Ukraine.

The other 40 most designated contracting parties were unchanged with the exception of Israel which was included for the first time in 24th position, Kyrgyzstan in 39th position and Uzbekistan in 40th position.

Most popular classes of goods and services

The international design system also allows an applicant who does not reside in a contracting party of the Hague system to apply for protection so long as applicants have a connection to a member country – be it a state or an intergovernmental organization. This was notably the case of applicants from the United States of America.

Procter & Gamble (USA) topped the list of largest users with 167 design applications received by WIPO in 2011. Procter & Gamble was followed by Swatch Group (Switzerland), Philips (Netherlands), Gillette Company (USA), Daimler AG (Germany), Nestlé (Switzerland), Vestel (Turkey), Volkswagen (Germany), LIDL (Germany) and Braun (Germany).
Packaging (mostly for foodstuff and cosmetics) and the containers for the transport and handling of goods, such as plastic bottles accounted for 13.2% of the international registrations. This was followed by clocks and watches (9.6%) and furnishing (7.3%) (table 6).

The WIPO-administered Madrid system offers a trademark owner the possibility of having a mark protected in up to 85 countries by filing one application, in one language (English, French or Spanish), with one set of fees, in one currency (Swiss Francs).

The oldest international trademark registration which is still in effect belongs to Swiss watchmaker Longines. This trademark was first registered in 1893. The International Register is located at WIPO’s Geneva headquarters.

Trademarks are a key component of any successful business marketing strategy as they allow companies to identify and distinguish their marks from those of their competitors, to promote and license their goods or services in the marketplace and to cement customer loyalty.

In today’s global and electronic marketplace, a trademark is often the only way for customers to identify a company’s goods and services. Trademark protection hinders attempts to “free ride” on the goodwill of a company by using similar distinctive signs to market inferior or similar products or services. Loss, dilution or infringement of a high-value trademark could prove harmful to a business.

The Hague system offers users a cost-effective and user-friendly means of obtaining protection for an industrial design by filing a single application with up to 100 individual designs and one or more designated contracting parties. Without the system, and because industrial design protection is limited to the territory where protection is sought, a designer would have to file separate applications in each of those territories in which protection is sought, and, in some cases, multiple applications in any one territory. Under the system, a single application is made for as many members as selected by the applicant. Members’ offices then have a limited period of time to examine whether a new international registration can be granted protection in their territory. After this, the effects of the international registration are the same as if all the designs contained therein had been registered directly with each of the offices concerned.

The system thus offers both immediate and long-term advantages, particularly with respect to cost. For example, an average application made for five designs and covering the whole of the European Union plus a handful of neighboring states such as Switzerland, Turkey, Croatia and Norway would cost between three and four times less in filing fees alone than if national or regional applications were made individually with each office. Moreover, additional savings would be realized in terms of legal and related services given the preparation and prosecution of a single application in a single language dealing with a single set of requirements. Finally, considerable long-term savings would be realized with respect to the centralized maintenance and management of a single international registration for all designs in all territories.

The Hague system rests on three different versions of the Hague Agreement, which are referred to as “Acts”, and each having its own membership. Recently, efforts have stepped up to simplify use of the Hague system by focusing on the Geneva Act of 1999. Following a decision by the Assembly of the Hague Union, the freezing of the application of the 1934 Act came into operation on January 1, 2010, thus simplifying the legal framework. During 2011, the geographical scope of the Union expanded with Finland, Monaco and Rwanda joining the Geneva Act.

Number of designations by designated Contracting Party (Includes designations in new registrations and subsequent designations) - Growth rates as compared to 2010.

Registrations by class in 2011, shares of total and growth compared to 2010