Despite difficult economic conditions, international patent filings under the WIPO-administered Patent Cooperation Treaty (PCT) set a new record in 2011 with 181,900 applications – a growth of 10.7% on 2010 and the fastest growth since 2005.1 China, Japan and the United States of America (US) accounted for 82% of the total growth (annex 1). Chinese telecommunications company ZTE Corporation was the biggest filer of PCT applications in 2011. 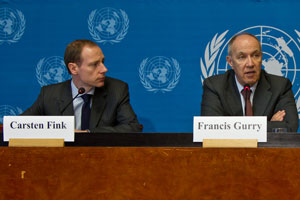 “The recovery in international patent filings that we saw in 2010 gained strength in 2011,” said WIPO Director General Francis Gurry. “This underlines the important role played by the PCT system in a world where innovation is an increasingly important feature of economic strategy. It also shows that companies have been continuing to innovate in 2011 – reassuring news in times of persistent economic uncertainty.”

Attesting to the rapid growth of the PCT system, 2011 also saw the filing of the two millionth PCT application, by US-based mobile technology company Qualcomm.

PCT filings by fields of technology

Digital communications with 11,574 (or 7.1% of total) published applications remained the field of technology accounting for the largest share of total PCT applications in 2011, followed by electronic machinery (6.9%), medical technology (6.6%) and computer technology (6.4%).3

The PCT system facilitates the process of seeking patent protection in multiple countries. It simplifies this process by postponing the requirement to file a separate application in each jurisdiction until after a centralized processing and initial patentability evaluation have taken place. Examination of the patentability of the invention in national offices and the related expenses are postponed, in the majority of cases, by up to 18 months – or even longer in some offices – as compared to direct patent filings. The PCT system now has 144 member states. Annex 5 presents total PCT filings from all member states from 2007 to 2011.

For data updates and additional analysis on the performance of the PCT system in 2011, please consult the PCT Yearly Review: The International Patent System in 2011, which will be published on WIPO Intellectual Property Statistics website in April of 2012.