Creative Biotech Branding Down Under

More importantly, the observation of the function of a gene provides an understanding of the role of the gene in human disease. Certain genes are responsible for diseases such as cystic fibrosis, hemophilia and Huntington’s disease. Specific genes also cause a predisposition to diseases such as heart disease, diabetes, and psoriasis. An understanding of the function of a gene in causing disease or resulting in predisposition to disease assists in the development of new therapeutic drugs to treat that disease, or vaccines to prevent disease.

Founded in 1999 by two scientists, Dr. Frank Koentgen and Dr. Gabi Suess, Ozgene™ Pty Limited produces genetically modified (GM) mice (and rats) according to customer specifications, i.e., mice which have had a gene deleted, or a gene inserted, either in a specific location in the mice’s DNA, or randomly in their DNA. 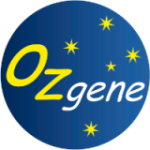 A major success factor of the Perth-based company is its branding strategy developed around its trademark. The trademark emphasizes Ozgene’s Australian location: firstly, by referring to “Oz”, and, secondly, by representing the Southern Cross star constellation, which is only visible from the southern hemisphere, and which is also reproduced on the Australian flag.

In line with their products and their sense of humor, Ozgene's management began to create eye-catching mouse characters. The characters were used on Ozgene's website, in advertisements in scientific publications, at presentations and on other marketing and promotional material. They were well received by Ozgene's customers, who appreciated the humorous touch. As time progressed, more inventive mouse characters were created, all displaying the Ozgene trademark.

Each year Ozgene is an exhibitor at the Biotechnology Industry Organization annual conference, and, for each conference attended, Ozgene created a new mouse, based on some theme represented by the city that hosted the conference. The mouse characters have an endearing appeal, and get noticed. And so do Ozgene's name and trademark. T-shirts displaying the mouse characters, which are given to visitors to its exhibits and customers, are a highly sought after prize. That, after all, is the purpose of a trademark: to make your product or service recognizable in its market for both existing and potential new customers.

Knockout mice have "knocked out" (deleted) one or more genes
(© Ozgene)

Of course, trademarks and branding alone cannot account for Ozgene’s success. The accumulated know-how of its founders and staff, coupled with its highly sophisticated tailor-made knockout (with one or more deleted genes), knockin (with one or more genes inserted into a particular DNA location) and humanized (carrying human genes) mice, as well as transgenic (with additional foreign DNA) and lentiviral (infected with a lentivirus) transgenic mice and rats, are at the root of Ozgene’s competitive edge. To protect its competitive edge, Ozgene has filed several national and international patents protecting, among others, its sequential cloning system.

Ozgene is an acknowledged world leader in its highly specialized field. It exports 80% of its production, mainly to the United States, Europe and Japan. Ozgene’s global customer base includes individual academics, research institutes, universities, biotechnology companies and multinational pharmaceutical companies from North and South America, Europe, Asia, Australia and New Zealand. In several cases, Ozgene is the preferred supplier or the sole supplier of knockout and/or transgenic mouse models. Today, it employs over 40 specially trained and dedicated staff serving the company's global customers.

The highly technical and specialized work that Ozgene does in a demanding industry is successful because of the highly skilled and expert staff that Ozgene is fortunate to attract and the cutting edge technical expertise of its founders. Investment in R&D and patent protection contribute to consolidate Ozgene’s global leadership in its specialist field.

However, first, potential customers have to know that Ozgene exists. The innovative use of its trademark in its marketing strategy has been a major contributor to Ozgene’s recognition in the global marketplace: it captures the market’s attention, reminds the market of Ozgene’s existence, and reinforces Ozgene’s reputation.