IP Strategies in the Textile Industry: An SME Faces the Challenge 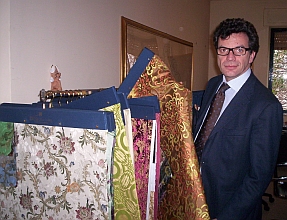 Gustavo De Negri with the textile samples from his last collection displayed at the 2008 Proposte fair.
(Photos WIPO/S. Castonguay)

San Leucio is a small hamlet in Italy that runs a few short streets downhill from what was once a royal hunting lodge. But what it lacks in size, it makes up in history and prestige. San Leucio has a rich heritage in the creation of exclusive tailor-made silk fabrics – a reputation for excellence that put the name of this tiny village onto the world map. The art of silk fabrication is handed down from one generation to the next.

Gustavo De Negri was born in such a family: the De Negris have been involved in the silk-making business for five generations. In 1998 Gustavo founded a small company – Gustavo De Negri & Za.Ma s.r.l. The previous generations of the De Negri family made silks for the ceremonial robes of popes and cardinals at the Vatican as well as for Europe’s royal families. Without disrupting this service, Gustavo has extended the range – and with it the reach of his company – by branching into high end decorative fabrics for home furnishing. He offers what he calls “a tailor-made dress for the house.” Every De Negri design is unique and produced in limited edition.

The company’s strategy is threefold: a constant self-renewal by creating new fabric designs; technical innovation in the mill’s mechanical, chemical and finishing processes; and the creation of a strong collective trademark for silk fabrics from San Leucio. Despite competition from inexpensive fabrics from elsewhere in the world, Gustavo and his 42 employees maintain their strong market position through innovation and quality.

De Negri uses no standard weaves. Every creation results from months of research and development (R&D) into the design, colors, weaving and finishing. Gustavo De Negri launches the creative process by studying both interior decoration and fashion trends. He then discusses his ideas with his two designers to choose a direction. Over the months that follow, the designers research past designs and works of art in order to create two or three novel designs, which De Negri tests with his client base. From their feedback, a design is selected and a prototype produced to test different qualities of fabric, color and weaving.

The company launches its new prototype designs every January at the Proposte trade fair in Como, Italy, where the world’s interior decorators select the fabrics that they would like to make their own. De Negri then works with them to individualize the designs to their needs in time for the September Maison & Objet fair in Paris.

“It can take up to three years for a prototype to come to Proposte,” Gustavo explains. “And sometimes, when it gets there, it is ahead of its time. It may take another two to three years for designers to catch on, before it becomes a must have item.” But he remains firm in his belief that innovative designs are a key part of the De Negri success.

Rich silks for home furnishing designed by Gustavo De Negri & Za.Ma. (Picture 3) Silk filaments twisted into thread are combed onto the loom for weaving into textile

The other main element is technical innovation. De Negri uses trade secrets to protect its modifications, improvements and customization of the production chain from twisting to dying and weaving as well as finishing.

Each four gram silkworm cocoon produces a 1,000 meter super fine silk filament. Five to eight filaments are twisted to make a thread, which can be woven into fabric. De Negri buys cleaned and purified Chinese cocoons in Como, where some 80 percent of Europe’s silk is produced. But the process from silk filament to textile in the De Negri mills is unique. Machines have been modified – some of them have even been built from scratch – making it virtually impossible for imitators to reproduce the same process and quality product.

Gustavo De Negri works with a Milanese loom maker to improve the machines and modify them to suit his company’s requirements. In a unique agreement the manufacturer makes the changes for free and Gustavo De Negri authorizes them to incorporate the improvements in their new machines. He says it is a good deal for him, “I get machines manufactured to my specifications for free and I am first on the market with this new technique. By the time imitators come out with a copycat product, we have already moved on to something better.” What he does not mention are the further modifications he makes to the loom once it enters his mill.

He has also worked with local university researchers to develop new techniques for finishing fabrics. One innovation made it possible for heavy brocades (a fabric in which raised patterns are woven) to drape like a light silk. Another resulted in an embossing effect on silk – much like embossed leather. Another produced a new watermark effect. He is now working with a university on a nano-technology that he says will revolutionize the industry. As to how, we will have to wait to find out.

In 2006, four San Leucio silk textile makers, G. De Negri & Za.Ma, Tesseci & Cicala, Bologna & Marcaccho and A.L.O.I.S., announced the founding of a consortium to unite their strengths and consolidate their position in the textile industry in view of the threat from China’s textile makers. Their goals:

De Negri & Za.Ma may be a small company, but they have kept ahead by thinking big. The silk fabrics of the company grace the homes of the rich and famous, presidential residences, royal palaces and luxury yachts. De Negri makes the fabrics which are presented by renowned interior decorators at the prestigious Maison & Objet fair in Paris as their own. De Negri’s client list includes Ralph Lauren Home and Christopher Hyland Inc. – the largest purveyor of luxury European textiles in the world.

Keeping a Step Ahead

Gustavo De Negri & Za.Ma faces a huge challenge from silk-producers outside Europe, particularly from Asia. The company responds to this challenge by maintaining its competitive edge through innovation and quality. The premium products of the Italian enterprise outweigh the cheaper versions from competitors through their superior quality and innovative weaving and designs. The San Leucio collective mark helps in retaining its exclusive reputation for excellence.