When Innovation is Child’s Play 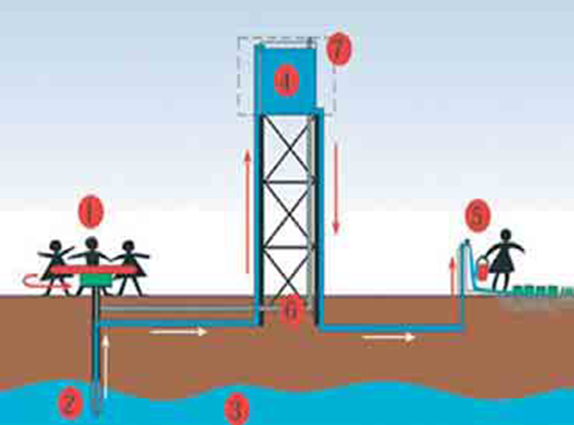 As the children play with the merry-go-round, water is pumped up from underground and stored in a nearby tank. The stored water is then used for household purposes. (Photo: Courtesy of PlayPumps International)

At the end of another school day in Acornhoek – a rural community in the semi-arid eastern part of South Africa – children shriek with laughter as they whirl each other around on a colorful merry-go-round. Women carry home buckets of water. Boys chase a football.

But there is more to this scene than meets the eye. Forty meters underground, each turn of the merry-go-round powers a pump. At 16 rotations per minute, it pumps water effortlessly to a 2,500-liter storage tank, supplying the needs of the entire community at the turn of a tap.

The idea was first dreamt up by engineer and borehole-driller, Mr. Ronnie Stuiver. As he traveled the country drilling wells, fascinated children would crowd round him – most with boundless energy and few outlets for play. He devised a merry-go-round attached to a simple pump. It worked. When children spin the merry-go-round, the attached pump pulls water from underground. The prototype of the unusual device was put on a display at an agricultural fair in 1989.

But it took the entrepreneurial vision of advertising executive Mr. Trevor Field to transform an ingenious invention into an innovative, sustainable solution to one of the region’s most pressing problems. Mr. Field happened to visit the fair where he saw Mr. Stuiver’s pump. He immediately recalled one of his experiences a few days earlier while he was on a fishing expedition: a group of village women beside a wind-powered water pump, waiting for the wind to blow and bring water up. He thought that the innovative pump could help develop a self-sustaining water system that could alleviate the water crisis in Africa and other regions of the world. As an advertising professional, he came up with the idea that the reservoir for the pumped water could be a place for billboards for advertising. That way, the advertisements could bear the costs of maintenance, while the children playing on the merry-go-round would power the pump. A unique combination indeed. 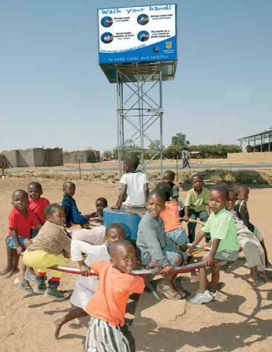 Mr. Field got in touch with Mr. Stuiver for negotiations regarding the invention’s commercial application. With two business colleagues, Mr. Field licensed the concept from Mr. Stuiver. They developed and patented the PlayPump™ water system. The word PlayPump is registered as a trademark in many countries including the European Union (No. 008689961). They have also applied for a trademark registration (US Serial No: 77844326) of the PlayPump name with the United States Patent and Trademark Office (USPTO).

In order to commercialize PlayPump, Mr. Field and his colleagues established a company named Roundabout Outdoors. The company manufactures, installs, and maintains PlayPump water systems in the sub-Saharan African region. For years it remained a small venture. Then in 1999 President Nelson Mandela opened a new school with a PlayPump merry-go-round and took a spin on one. The press photos captured the imagination of donors and investors.

A major step forward occurred when the Case Foundation, a privately-owned non-profit investment organization in the United States, got interested in PlayPump. Under the initiative of the Case Foundation, PlayPumps International (PPI-US) was created and registered as a non-profit organization in the United States. Mr. Field is directly involved in PPI-US. Collaboration began to flourish between PlayPumps International (a non-profit organization) and big business and government sponsors. Trademark applications have been filed with the USPTO for registering the organization’s name. Unlike Roundabout Outdoors, which works as a commercial, profit-making enterprise, PPI-US operates as a charitable fundraising organization to donate PlayPump water systems to African communities and schools.

The new organization received positive response internationally. In 2006, the PlayPump system was endorsed by the then First Lady of the United States Mrs. Laura Bush as well as by former United States President Bill Clinton.

By late 2009, PPI-US management believed that their role had transitioned and it was no longer necessary for PPI-U.S. to continue as the fundraising entity. In December 2009 it concluded an agreement with the United States-based non-governmental organization (NGO) Water for People. Pursuant to the agreement, PPI-US selected Water for People as its implementing partner for installing the PlayPump systems, and donated the inventory of uninstalled systems to the NGO. 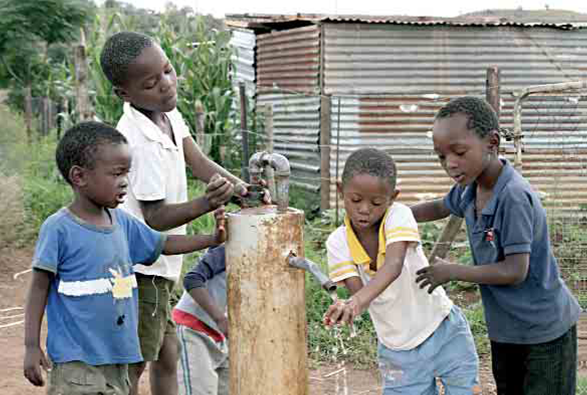 The boys of Boikarabelo wash in the water they pumped while playing. Access to clean water means better hygiene and sanitation so less disease (Photo: Frimmel Smith)

By 2008, some 1000 PlayPump systems had been installed in disadvantaged communities across South Africa, Mozambique and Swaziland, transforming the lives of over a million people.

Journalist Kristina Gubic described the change brought about by PlayPump to Boikarabelo village as follows: “A two hour drive from Johannesburg, Boikarabelo is home to 700 people living in corrugated iron shacks. Before, the residents had to walk across boulders and grasslands to the edge of a farm to collect water from an underground spring. Just carrying the minimum amount of water necessary for cooking and washing was exhausting work. Today, each family has a vegetable garden and laundry hangs everywhere. The school is constructing greenhouses to make it independent of the sporadic donations on which school meals used to depend. With cabbages, spinach and beans to supplement the maize diet, the children’s nutrition has improved dramatically.”

The economic and social impact reaches further. Clean water prevents the diseases which kept children from school and parents from work. Freed from the daily toil of water-carrying, girls have time for education; and the women elders of Boikarabelo have started a small craft business. Across the street, another resident has begun raising chickens, which he sells to the local supermarket. Fresh drinking water as well as clean cages make his chickens healthier and he receives better prices for them.

Many developing countries with moderate research activities suffer from an innovation chasm because they fail to bridge the gap between knowledge generation and knowledge application. The story of PlayPump depicts how a small initiative can be very effective in bridging the gap to bring technology to communities and thus transform the lives of millions of people.