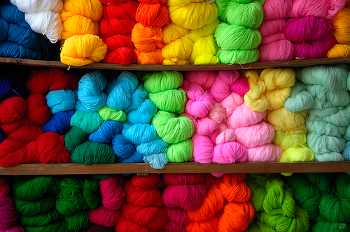 Heng Yuan Xiang got its start in the wool industry (Photo: Feng Zhong)

Founded in 1927, the Heng Yuan Xiang Group (HYX) was, for the first sixty years of its existence, a small wool store of less than 180 square meters in Shanghai. When Mr. Liu Ruiqi took over as General Manager and Chairman of HYX in 1987, he was faced with the seemingly insurmountable task of turning a company with few resources into a successful business. Although HYX was small and had minimal tangible assets, Mr. Liu quickly identified that the company’s name carried a considerable amount of fame and recognition, and wasted little time in developing a brand strategy.

Staunch believers that the future of international competition would be in intellectual property (IP) and that Chinese companies should be encouraged to create world-class name brands, Mr. Liu and the company knew that a business strategy based on an IP protected brand name was essential. Combined with the company’s intimate knowledge of the Chinese textile market and other useful information channels, this strategy would eventually transform HYX into China’s largest textile producer, and one of the largest textile companies in the world.

For Mr. Liu, the most important thing for a company to do to achieve success is to form its own brand culture. So his first plan of action was to register the company’s well known name as a trademark. To make the trademark more appealing, he added a cartoon image of a little girl beside the three Chinese characters representing the company name. This made the trademark eye-catching, easy to identify and easy to remember. The new trademark would be the revitalized face of the company, and Mr. Liu knew that it had to be backed with high quality products and excellent service. This brought about his next challenge: to find a solution to HYX’s lack of tangible financial and marketing resources. HYX needed to either raise the necessary capital itself or find a complementary partner to work with. Mr. Liu chose the latter option, and sought an alliance with a textile factory that had the necessary assets for production – equipment, factories and capital – but lacked the intangible assets that HYX could provide.

HYX created a strong brand name through
its logo (as submitted in Madrid system
registration no. 976243, Madrid Express)

HYX’s name recognition and new trademark attracted the attention of many potential partners. Mr. Lie chose one that would best complement his company’s business, and this first partnership, driven by a strong brand name, paved the way for a new venture in the wool industry to go forward. Under the branding strategy, all products produced would be united under the HYX brand name. Because the company’s name was already so well known in China, the factories could save on advertising and marketing costs and at the same time reduce internal operational costs, allowing for more investment in further market development. This initial collaboration was a resounding success, and the company moved from producing only 75 tons of wool annually in 1991 to over 10,000 tons annually in 1997.

Building on the power of a brand, Mr. Liu cleverly used the company’s brand name to create economic value, realizing that while products can resemble each other, a brand name is unique. As part of the overarching branding strategy of the company, Mr. Liu attached great importance on promoting the brand in a very specific way. A turning point for the company came in 1992, when it launched a unique five second television commercial, paying heavily to have it played during one of the most popular television series of the time. The commercial did not use famous stars or any other gimmicks, but merely used cardboard cutouts of the three Chinese characters representing the company name and one cutout of the little girl. A voiceover repeated the name of the company once, plus the word “sheep” three times, with the sequence repeating twice during the commercial. The commercial was repeated several times during each episode of the television series. The simple yet creative commercial quickly caught the attention of television audiences throughout the country, and the HYX brand name became a household word synonymous with wool textiles in China.

This early success of reinventing HYX’s image through a new brand name allowed it to put significant resources into research and development (R&D). The company has invested heavily in researching new technologies to develop the world’s finest wool products. Areas of specific R&D include applying these new technologies to the weaving, dyeing and finishing processes of production. HYX also consistently researches the latest fashion trends and uses the latest technology to analyze an ever changing market. One such project involved creating a “human information database,” which is made of information on the changes of body shape over time, so the company can develop innovative products to meet the changing needs of its customers.

Beyond the creation of new products, an important part of the company’s R&D portfolio is its research and investment into brand promotion and developing innovative advertising campaigns. As Mr. Liu said, “If you do not invest, your brand will gradually disappear.” After achieving “household name” status domestically, HYX’s sought to develop its name into a worldwide brand. To achieve this, in 1995 the company launched a campaign to become an official sponsor of the Olympic Games. Its goal was realized when it became an official sponsor of the 2008 Beijing Olympic Games. While some may question this move, Mr. Liu explained that “A lot of people suppose HYX’s products have nothing to do with the Olympic Games, but our sponsorship isn’t simply aimed at accelerating sales. We are improving brand value and building consumer knowledge.” 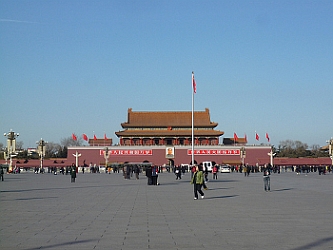 Tiananmen Square, where HYX had its name displayed on the floor for the 1997 return on Hong Kong (SAR of China) celebrations
(Photo: Liren Chen)

Successful R&D into brand promotion strategies brought many similar campaigns, all of which have gone a long way to increase exposure of the company’s brand name. In 1997, China was celebrating the return of Hong Kong (SAR of China) and a massive parade was held in Tiananmen Square, Beijing. Upon learning about the parade, HYX launched a campaign to puts its name somewhere in the square. After studying the layout, talking with officials and securing the necessary permits, the company had its name displayed in large letters on the floor of the square, right where over 2,000 children from across the country would be passing through in participation of the parade. This area had the most media visibility, and as such the HYX brand was seen by millions of people throughout the world.

Another branding strategy is the sponsorship of sports, which brings even more exposure to its brand. Since 1997 the company has sponsored domestic women and youth soccer teams, and has sponsored the Chinese national soccer team in the World Cup on numerous occasions. It was also the official designer for national team uniforms in the 2008 Olympics and the 2010 Asian Games. In anticipation of the 2008 Beijing Olympics, in 2007 HYX began producing hand-knit woolen tapestries depicting each president of the International Olympic Committee (IOC). The portraits were donated to the Olympic Museum in Switzerland upon completion. The company also capitalized on its resources and furnished the 2,400 rooms in the Beijing Olympic Village with quality linens, and also designed and provided the uniforms for the Beijing Olympics Organizing Committee and other high ranking officials. All of these successful endeavors have helped solidify HYX’s brand name in China, and have gone a long way in helping the company achieve the international brand name recognition it is seeking, which will allow it to compete in new international markets.

By 2010, HYX had partnered with over seventy factories that help to manufacture its products. All marketing decisions, advertising campaigns and sponsorship programs are undertaken by the company itself. After the initial success and resurgence of the company through branding partnerships, HYX decided to take a similar approach towards the marketing of its products, and introduced a comprehensive franchise system. Similar to the collaborations with the textile factories, the company licenses its intangible assets – including its trademarks and know-how – to its franchisees. This has proven to be an overwhelmingly successful commercialization strategy, and as of 2010 the company boasted over 5,000 franchise stores selling products in more than seventy categories, such as pure wool, clothing, bedding and other household linens.

A well crafted and creatively used brand name, backed by IP protection, has paved the way for HYX’s transformation into the largest textile producer in China. The company’s branding strategies have allowed it to expand into international markets. Its first subsidiary abroad opening in Uruguay in 1996 and by 2010 it enjoyed annual revenues of over US$ 3 billion.

A Name for Success

Facing increasingly difficult competition from well established multinational companies and with few financial resources available, HYX used only a name to build itself into the success that it is today. Focusing on growth through IP rights, strong brand names and high value-added products and services, the company has made significant headway on its commitment to bring a quality Chinese brand to the international market.