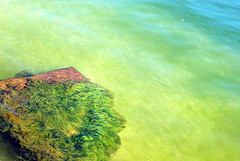 Spirulina algae, which is used in many of Fame's
products (Photo: Lara Torvi)

The role of traditional medicine has played an important part in Myanmar’s history. Although the use of modern medicine has dramatically increased, it is not easily accessible for much of the population due to prohibitively high costs and limited availability, especially in rural areas. Even when it is readily available, many people are reluctant to use it because of cultural differences and concerns of side effects. Traditional medicine has been used for generations and is more affordable and easily obtainable – even in rural areas – therefore it continues to be widely used and plays a significant role in health care in Myanmar.

In 1997, the World Health Organization (WHO) drafted the Declaration on Health Development in the South-East Asia Region in the 21st Century (the Declaration), in which member states laid out their proposals for health reform. One important topic was that of traditional medicine, and the government of Myanmar has taken measures to increase the role that traditional medicine plays as an internationally accepted and natural alternative to modern medicine. As part of this initiative, the Myanmar Ministry of Industry and the Myanmar Food and Drug Administration (MFDA) actively promote policies that are advantageous to private pharmaceutical companies in the manufacture of high quality traditional medicine. One company that has benefited from such policies is FAME Pharmaceutical Company (Fame), a privately owned Yangoon based manufacturer and marketer of traditional herbal medicines.

In Myanmar, under the 1992 National Drug Law prescription drugs can only be produced by government owned factories to ensure quality and reduce health risks. Fame started in 1994 as an authorized distributor of medicine produced by the Myanmar Pharmaceutical Factory (MFP), one of the two government owned factories that produce prescription drugs. In line with the government’s desire to promote traditional medicine, in 2002 Fame started production of traditional medicine as a substitute for expensive imported medicine. The company’s high quality, low cost products earned it a good reputation and the Fame brand became very popular. The company is now the leading manufacturer of traditional medicine in Myanmar and also enjoys a profitable export business.

Taking advantage of positive conditions in the health industry as a result of the Declaration, Fame established a research group in 1997 to develop traditional medicines that would meet international quality standards. The results of this research was the creation of Fame’s first product: Fame Pluvimin, a multivitamin produced from spirulina (a microscopic algae containing many nutrients) grown in Myanmar. Pilot production took place in January 2001 and in February 2002 full scale manufacturing started. Fame Pluvimin was met with great success, and research and development (R&D) continued towards the creation of traditional medicines for six major diseases: diarrhea, diabetes, dysentery, high blood pressure, malaria and tuberculosis. Subsequent products were met with similar success, and the company’s R&D into traditional medicine has become the cornerstone of Fame’s business and is essential to its growth.

Fame continues to use modern technology in its R&D programs to innovate quality organic medicines under the guidelines laid out by the Declaration that treat many common disorders. The organic nature of the company’s products is of particular importance to attracting customers. Because of the widespread use of traditional medicine in Myanmar, organic products can bring people peace of mind, ensuring them that the products are safe and similar to what they have been using for generations. Fame therefore puts significant effort into its R&D to ensure that it develops organic medicines that meet customer expectations and needs, and even bills itself as more of an organic farm than a pharmaceutical company. In March 2010, Fame received certification from the Myanmar Organic Agriculture Group recognizing it’s adherence to organic production requirements.

Research into extraction methods, efficacy experiments and quality control are all integral to the company’s R&D success. Partnerships and collaborations are also used to facilitate the development of new medicine, and Fame works with scientists and researchers from the University of Yangon, Yangon Technological University and the Department of Medical Research of the Ministry of Health. Laboratories with cutting-edge technology in Germany, Switzerland and the United States are also utilized in the testing and quality control processes.

Another important part of Fame’s R&D is to publish monthly journals on medicinal plants and the related diseases they treat. These are used along with organized programs to educate the public on the benefits and uses of traditional medicine. The company also shares its R&D findings with physicians and patients through seminars, workshops, conferences and exhibitions. Local and international training courses are also provided to employees and researchers to maximize R&D effectiveness and quality control. 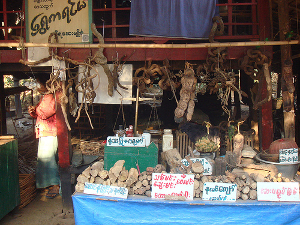 According to traditional beliefs in Myanmar, there are 96 diseases which afflict humans. Myanmar traditional knowledge and medicine is believed to be able to cure all of these diseases by using ingredients such as fresh or dried roots, stems, leaves, buds, and flowers. With its roots in similar traditional medicine systems of neighboring countries, traditional medicine in Myanmar has been enriched by traditions, adaptations and adoptions of different practices throughout the centuries.

A strong brand name backed up by innovative products has been one of Fame’s most important success factors. To protect its brand name and products from copying and infringement, Fame registers each new product name it develops with the Myanmar Office of Trademark Registration (MOTR). Fame has over thirty trademark registrations, the first of which was for its Fame Pluvimin multivitamin. Trade dress is also important because consumers are able to quickly identify Fame’s products. Because copying package designs is a common infringement, the company also registers all package designs with MOTR and also uses special anti-counterfeiting technology in its packaging.

All of Fame’s products are manufactured at its factory in Yangon, which has received international recognition for the quality of its production and management systems. In 2009, the company received ISO 9001:2008 certification for its quality management systems, ISO 14001:2004 for its environmental management systems and OHSAS 18001:2007 certification for its occupational health and safety systems related to its research, development and manufacturing of alternative medicine products. There are approximately 250 employees working at the factory, including scientists, doctors, pharmacists, biochemists, botanists, microbiologists and traditional medicine specialists. Ninety percent of manufacturing materials are taken from domestic sources, including from the company’s medicinal herb garden located in northern Myanmar. Fame has ten offices and pharmacies in the major cities of Yangon, Mandalay and Tuangyi, and its products are distributed to more than one thousand pharmaceutical locations throughout the country. Fame products are also distributed internationally in Southeast Asia and other countries such as Germany, Japan and the Republic of Korea.

Fame’s products are divided into five categories: spirulina products, herbal medicine, honey and bee products, consumer products and cosmetic products. Besides Fame Pluvimin, other spirulina products include Spiru-C (an antioxidant supplement) and Spiru-Garlic (a cholesterol lowering agent). The company is a leading producer of herbal medicine products, some of which include Diarstat (anti-diarrheal), Dia-herb (anti-diabetic) and Plasmogin (anti-malarial). For honey and bee products, popular Fame products include Royal Jelly, an anti-aging agent, and Tinospora Honey, and anti-inflammatory agent. Consumer products based on medicinal herbs include Neem Skin Cream and Nemoderm, a natural antiseptic. The company’s cosmetic products are marketed under the Ladymax name, and include products such as anti-wrinkle cream and anti-aging gel.

Commercialization of Fame’s products has had a positive social impact on the population’s ability to access medicine in Myanmar. Because of the important role of traditional medicine, and also because imported Western medicine is prohibitively expensive, people have access to affordable alternatives to meet their health care needs. With the utilization of traditional medicine growing every day, safe, high quality products are essential. Through commercializing its products, Fame has been able to meet a very important social issue in Myanmar and provide for the health and well being of many people, who would otherwise have gone without any form of medical care.

Originally only working as a domestic distributor for MFP, Fame is now one of the largest traditional medicine manufacturers in Myanmar, enjoying international reach with an annual turnover of over US$2 million. The company’s dedication to quality products brought it WHO Good Manufacturing Practice certification in 2006. Fame’s innovations have also brought it numerous awards, such as the 4th Century International Quality Era Award in 2002, the Golden Asia Award for Excellence in 2002 and the Golden Trophy for Technology and Quality in Switzerland in 2004. In a considerably short time, Fame has become internationally known for its innovative products.

In many parts of Myanmar, economic circumstances have made it difficult for people to access modern medicine. Recognizing the need for a viable alternative to expensive imported drugs, Fame was able to use the abundant natural resources of Myanmar to develop traditional medicine that is affordable and easily accessible. Not only has the company enjoyed growth and access to international markets through its innovative IP, but its products have also enhanced the well-being of people who would otherwise not have access to medicine.