UEFA’s Battle for its Brand 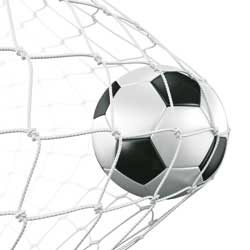 This second in a series of articles on intellectual property (IP) and sport outlines the approach used by the Union of European Football Associations (UEFA) to safeguard the IP rights with which it generates revenue that helps finance major sporting events and contributes to the long-term development of the sport.

Two red-letter days – May 19 and July 1 – are, no doubt, already marked in the calendars of soccer fans across the globe. On these dates, Europe’s top national soccer teams will lock horns in the match play finals of two of European football’s blue riband competitions - the UEFA Champions League and UEFA EURO 2012 respectively. This article considers how UEFA gores about protecting one of the world’s well-known brands.

Among the world’s top sporting events, surpassed only by the FIFA World Cup and the Olympic Games, interest in UEFA’s competitions goes far beyond the soccer community. Over one billion people tuned into the 2008 UEFA European Football Championships with, on average, an estimated 150 million television viewers watching each match. Some 1.1 million spectators watched the matches live inside stadiums and a further 4.2 million followed the action on giant screens located in official “fan zones”. The UEFA EURO 2012 tournament, including qualifying matches, is expected to attract a cumulative audience of 4.3 billion, a global live television audience of 1.1 billion with an estimated 55,000 hours of TV coverage across 220 countries making it one of the world’s premier brands.

By protecting its intellectual property (IP) rights, UEFA is able to maintain the sustained growth and development of European football. With these rights, the European football’s governing body can generate revenue by granting and guaranteeing exclusive licenses to its official commercial partners. The derived revenue is distributed with the aim of promoting the healthy and continuous development of professional, amateur and youth football throughout Europe. 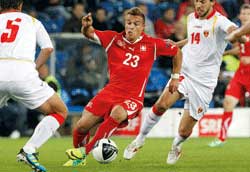 A proportion of this revenue is devoted to tackling some of Europe’s key social issues. For example, over 400 million euros were disbursed from the coffers of the UEFA EURO 2008 tournament to member associations via UEFA’s HatTrick program. This program provides financial assistance to national associations in support of their efforts to improve and upgrade their infrastructural, administrative, managerial and sporting environments. The support of commercial partners is, therefore, vital, not only in financing major sporting events but also in ensuring the long-term development of the sport as a whole.

Protecting the IP rights of one of the world’s well-known brands is a challenging task. The downside of the broad global interest in UEFA’s tournaments is that they are seen by many as an opportunity to associate themselves, their goods and services with the success and reputation of these events. This threatens UEFA’s ability to finance these tournaments. UEFA relies on the revenue derived from sponsorship deals with official partners to finance the championships. Official partners pay for the privilege of being associated with the championships in return for guarantees of exclusivity. This makes protecting the IP rights linked to the competitions a key priority for UEFA - a task made all the more daunting given the scale, variety and impact of rights violations that arise.

IP rights violations include infringements of trademark and/or service mark law involving, for example, the abusive registration of marks or domain names identical or similar to event marks, or the unauthorized use of event marks in advertising or on products. They also include infringement of copyright law in relation to the unauthorized re-transmission of matches as well as the misuse of designs in terms of the visual identity of the event, for example. The misuse of tickets relates to the unauthorized re-sale of tickets and their unauthorized commercial use (including for promotional or advertising purposes, as prizes in competitions or sweepstakes or as part of a travel package). 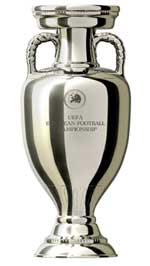 European soccer’s most coveted
trophy is protected in various ways,
by copyright law, and variously
through the European Community
Trademark System (CTM 007463821)
including in 3D (CTM 8860025) and the
Madrid System for the International
Registration of Marks (IR 1020340).
The trophy is also protected as a
registered design (RCD 635750-33-34).
(Photo: UEFA)

In the lead up to the UEFA EURO 2012 championship, for example, Ukraine adopted the “Law of Ukraine on organizing and staging the final tournament of the 2012 European Football Championship”. This law stipulates, among other things, that Ukraine provides for the protection of the IP rights of UEFA and its commercial partners and prohibits ambush marketing (defined as a “any type of activity (marketing, advertising, PR) associated with the tournament, with the aim of gaining profit from the goodwill by a party which has not been authorized to do so by UEFA”).

UEFA’s Rights Protection Programme (RPP) has been developed and implemented to tackle any infringement of its rights. It is also designed to safeguard UEFA’s investments as well as those of its commercial partners. In so doing, the RPP ultimately serves the interests of soccer fans everywhere who have an opportunity to share in the excitement of the tournament and celebrate their sporting heroes.

UEFA’s RPP includes a range of preventive and reactive measures such as:

In parallel, UEFA works with a global network of legal specialists who advise on any potential infringements that may arise. This allows the European football governing body to act swiftly and decisively whenever its rights are infringed. UEFA has already dealt with over 400 cases of rights infringement relating to the upcoming UEFA EURO 2012 championship. Many of these cases involved attempts by third parties in the host countries to register marks and designs referring to the upcoming championship. The national trademark offices of Poland and Ukraine received several hundreds of such applications, which were promptly rejected.

The EURO 2012 championship logo is registered
under WIPO’s Madrid System for the International
Registration of Marks.

UEFA also works closely with customs authorities and local administrations to monitor commercial activities, such as the sale of unauthorized or fake merchandise, in host countries. Such collaboration has already resulted in 40 seizures across Europe. The first case involving counterfeit UEFA EURO 2012 products arose in Poland in March 2010 when Polish customs officers intercepted a shipment of over 10,000 pairs of children’s sports shoes emblazoned with EURO 2012.

Strict regulations on the management of competition sites are also implemented to prevent any unauthorized commercial activity in or immediately around the competition stadiums, again, with a view to guaranteeing the exclusivity of official partners and safeguarding the long-term financial interests of the tournament.

From the perspective of official partners, their exclusive association with the tournament is a unique platform to create new opportunities for business development while facilitating access to the event.

The registration and defense of marks is at the heart of UEFA’s IP protection strategy. As the holder of registered marks, UEFA is in a position to guarantee exclusive licensing rights to the commercial partners associated with its competitions. Such protection is often enshrined in a contract.

In the absence of special legislation, the protection afforded by trademark/service mark law remains the best way to combat the many infringements of the commercial rights linked to major sports competitions. The registration of a mark is often key to obtaining the support of the national authorities (in particular customs authorities, the police and trading and standards agencies) responsible for tackling infringing activities.

Marks for sporting events are unlike other well-known marks in that they have a very short shelf life. Those linked with the UEFA European Football Championship, for example, are specially created for the competition held in a particular year. This can be a challenge given the fact that registration procedures in some countries are not always adapted to the competition cycle. In this respect, the WIPO Madrid System for the International Registration of Marks is very useful as it guarantees the registration of events marks within 18 months, whereas in certain countries that are not part of the Madrid system, registration can take much longer. As these events are world renowned, the associated marks are registered not only in the host countries and all those taking part in the tournament, but also at the global level. The marks are also registered in almost all classes of goods and services to cover those offered by UEFA’s official partners.

The main designations linked to this year’s championship, namely, UEFA EURO 2012 and POLAND UKRAINE 2012 are, along with their local equivalents, protected as word marks, as are the different language versions of the official slogan “Creating History Together”. UEFA has also sought to protect the figurative elements of the UEFA EURO 2012 emblem, mascots and trophy. These official marks are widely protected through trademark or service mark registration, copyright and other IP laws.

While trademark law is effective in tackling many of the types of IP infringements organizers of major sporting events face, it does nothing to halt violations relating to ambush marketing. For this reason, a growing number of host countries adopt special legislation to afford the IP rights associated with high profile competitions greater protection. Such legislation gives organizers greater scope to stop unauthorized third parties from associating with the events. Protecting the interests of event organizers and their official partners ensures that the financial benefits of hosting such events flow to the host country and ultimately to fans who are offered a unique opportunity to celebrate and participate in their sport of choice.