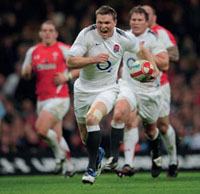 England’s Chris Ashton runs for the try
line in a match against Wales in the
2011 Tournament. (Photos: Getty Images)

This is the first in a series of features that explores the interface between intellectual property (IP) and sport. In the aftermath of the Rugby World Cup and with the 2012 RBS Six Nations Championship being played out in February and March this year, WIPO Magazine kicks off with this view from inside the Six Nations Rugby Championship of how IP helps safeguard the commercial value of rugby.

The RBS Six Nations Championship is rugby union’s showpiece event in the northern hemisphere and generates considerable commercial revenues that underwrite the development efforts of each participating union. IP laws protect the commercial value that SNRL and its shareholder unions have created in the Championship, and they provide a robust and effective mechanism for combating online piracy of the Championship’s official broadcast coverage. Without effective IP laws rugby union’s efforts to grow will be stymied, and its clear public interest benefits – in terms of delivering top-quality sports coverage and promoting health, social inclusion, and racial and gender equality – will be compromised.

Rugby union and the public interest

Rugby union is played in over 100 countries, across the five continents. The recent inclusion of 7-a-side rugby as an Olympic sport promises to fuel further interest in it. The traditional rugby powerhouses in the northern hemisphere are England, France, Ireland, Italy, Scotland and Wales (collectively known as the Six Nations), and in the southern hemisphere, Australia, New Zealand and South Africa. Popular demand for the sport and, therefore, its commercial value are greatest in these countries.

In addition to regulating and protecting the integrity of the sport, rugby union’s governing bodies (or unions) organize and stage international matches, tours and tournaments involving their respective national teams. They sell the rights to these events (principally broadcasting and sponsorship rights) to generate commercial revenue. The prime objective of the unions, however, is to act as custodians of the sport, so that it expands and develops at all levels. Any revenue generated over and above the staging costs is re-invested in the sport, both to improve it at the professional level and to provide facilities and coaching opportunities at the community level. Such investment at the grass roots enables amateur players to enjoy the health, recreational and social benefits of the game and facilitates the identification and development of new talent to join the professional elite. The professional game then drives the popularity of the sport and generates additional revenue for further investment. This “virtuous circle” enables the unions to generate consumer benefits, employment opportunities and tax revenues at the professional end of the sport, and public policy benefits at the community level, in terms of better health and greater social inclusion and racial and gender equality.

IP law allows SNRL to harness the commercial value the unions have created in the Championship. While in many jurisdictions the law does not recognize proprietary rights in a sporting spectacle per se, the live feeds and recordings created by the event’s host broadcasters are protected under copyright law. By a combination of controlling access to match venues (using ticket terms and conditions to prevent unauthorized commercial photography) and imposing contractual conditions on host broadcasters (including the assignment of copyright in the broadcast signal and recordings of it to SNRL), it is possible to create protectable and enforceable packages of “exclusive” broadcast rights that can be exploited by reference to media platform, time-window, and/or territory, in line with consumer demand.

SNRL sells the broadcasting rights to the Championship in each of the host countries on a territory-by-territory, platform-neutral basis. It has always granted the rights in the UK, France and Ireland to the main public broadcasters in those countries (i.e., the BBC, France Télévisions and RTÉ), while in Italy most recently it has granted the live broadcasting rights to the Championship to Sky Italia and deferred rights to La7.

These official licensed broadcasters transmit every match in the Championship live and in full, on their most prestigious channels, to huge audiences. In 2010, over 124 million viewers in the six host nations alone watched the Championship. Live or deferred coverage of the tournament can also be seen in over 80 countries outside the six participating nations, thanks to a number of international distribution deals.

In this way, the flexibility of copyright law allows and indeed stimulates SNRL and its broadcast partners to create programming that is appropriate to each local market, with support programming and features such as interviews and commentary that reflect local cultural interests and linguistic requirements. It also enables SNRL to deliver the exclusivity that broadcasters demand and that prompts them to invest not only in the sport (through the rights fees paid to SNRL) but also in innovative production techniques (such as HD and 3D) that offer an enhanced viewing experience for fans.

Use of Six Nations commercial revenues

The tens of millions of euros derived from these broadcasting deals represent more than 80 percent of the total revenue generated by SNRL in relation to the Championship. This revenue is distributed to the six participating unions according to a pre-agreed formula (75 percent distributed equally, to protect competitive balance; 15 percent, based on Championship standings, to boost playing performances; and 10 percent allocated according to the size of each union). It is a vital part of their operating income.

IP law recognizes and protects the value the six participating unions have created in the Championship. By conferring exclusive legal rights, it enables SNRL actively to exploit the value of its brand, and to protect that brand against infringement by third parties. This exclusivity is what SNRL’s official licensed broadcasters demand, and what they pay millions of euros annually to secure.

Currently, however, there are two serious threats to SNRL’s ability to deliver that exclusivity and to capitalize on its value.

The first threat is that the judgment of the Court of Justice of the European Union (CJEU) in the Murphy case in October 2011 is being misinterpreted and misapplied. The CJEU did not outlaw the licensing of broadcasting rights to a sporting event on a territorial basis in Murphy (as some commentators have suggested). On the contrary, the CJEU explicitly recognized that the sale of an “exclusive” territorial license, for a “premium”, may be justified in order to remunerate the event organizer appropriately for the value it has created. What the CJEU said was unjustified was the creation of “absolute territorial exclusivity”, resulting in “artificial price differences”, by prohibiting the cross-border supply of satellite decoder devices that would make other licensees’ alternative coverage of the event available in the territory.

What will be crucial in moving forward is how that distinction between an “appropriate” premium for “territorial exclusivity” and an impermissible premium for “absolute territorial exclusivity” is interpreted and applied. In particular, on what side of the line will other typical license restrictions fall, such as language restrictions, Internet geo-blocking requirements, and Internet pay-wall requirements? If the line is drawn in the wrong place, so undermining the ability to extract any premium for territorial exclusivity, SNRL’s current business model would be destroyed, and the Six Nations would be prevented from pursuing so effectively their public interest agendas described above.

Nick Easter, the captain of England,
winners of the 2011 Championship,
lifts the Six Nations Trophy.

The second threat is the growing menace of digital piracy. Fuelled by technological developments that make it easy to stream audio-visual content online, there are currently a hundred or more unauthorized operators that grab SNRL’s official licensees’ broadcasts of Championship matches and retransmit them live and in full on distributor streaming sites such as myp2p.eu and rojadirecta.com, or via peer-to-peer sites such as sopcast.com and synacast.com. These sites often attract substantial audiences, and generate significant subscription and advertising revenues.

In sport, the value of the broadcast lies in the uncertainty of the outcome, giving (in contrast to other audio-visual content) the live broadcast window of overriding importance. Live online streaming of Championship matches is therefore a significant concern for SNRL’s official broadcasters. They require undertakings from SNRL that any Championship footage made available online by SNRL or another licensed broadcaster will be geoblocked and unable to be viewed in their territory; and they also want no unauthorized online broadcasts by unlicensed operators.

Taking legal action after such activity has occurred is not only expensive and burdensome it is also too late and ineffective in remedying the theft involved. SNRL believes that the law has to provide a robust mechanism to take down illegal streams instantaneously, and stronger remedies to shut down and deter repeat infringement.

Internet Service Providers (ISPs) have a key role in this, given the fact that many of the perpetrators skillfully elude detection by, for example, providing false or proxy registration details. The grant of intermediary injunctions against ISPs (as permitted by the IP Enforcement Directive) to block access to infringing sites would help remedy the situation. Courts across Europe are currently grappling with the terms of these injunctions. SNRL hopes they will recognize the need to provide a strong and practical remedy for rights holders and ultimately the public.

SNRL, individually and as a member of the Sports Rights Owners Coalition believes it is critical for policy-makers worldwide to recognize and support its efforts to protect and exploit the commercial value of the RBS Six Nations Championship. This is for the good of the consumer who wants to watch a quality product, and for the many millions of people who want to play, coach, and otherwise benefit from the massive investment that the participating rugby unions can make on the back of the revenue generated from the sale of broadcasting rights to the Championship.

The Internet is a marvelous medium for sport, and SNRL and its broadcast partners are using it to bring the Championship to its millions of fans. But the Internet must not be allowed to become a thief’s paradise, a medium for digital pirates to rip off the efforts of those who invest in and create the value of the sporting spectacle. If digital piracy is not curtailed, official broadcasters will reduce their investment in the sport, the quality of the Championship as a consumer product will be damaged, and the sport’s ability to pursue its public interest agenda will be undermined.