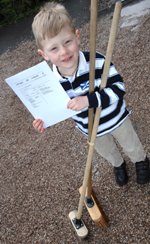 "I saw my daddy brushing up and made it." (Photo: UK IPO)

An “Improved Broom,” conceived to help his dad with work in the garden, has made five year old Sam Houghton the UK’s youngest patent holder. The young inventor – only three years old at the time – had the idea while watching his father raking up leaves with one broom then switching to another for smaller debris. Sam suggested tying the two brooms together with a large rubber band. Sam’s father – who happens to be a patent attorney – figured that Sam’s double-broom idea was sufficiently new, useful and inventive to be patentable. He filed a patent application with the UK Intellectual Property Office (IPO) - now granted.

Sam said: "I saw my daddy brushing up and made it. There are two brushes because one gets the big bits and one gets the little bits left behind. I don’t know if I want to be an inventor when I grow up but this was fun."

Sam is a fan of Wallace & Gromit, the accident-prone inventor and his canine side-kick who star in the animated films by Nick Park, and whom the UK IPO have adopted as mascots for their Cracking Ideas campaign (see www.crackingideas.com). "Characters like Wallace & Gromit can really inspire children to innovate,” said Sally Long, the Cracking Ideas project manager. “Sam has shown what a young mind can come up with. Patent applications do not always record ages but we have never come across anyone as young as Sam who has been successful in their application and believe he is the youngest yet."

The 61st World Health Assembly (WHA) which was held in Geneva from May 19 to 24 adopted a Resolution on a Global strategy and Plan of action on Public Health, Innovation and Intellectual Property. The Strategy aims at promoting new approaches to pharmaceutical research and development (R&D) and to enhance access to medicines, particularly for diseases that disproportionately affect developing countries.

The WHA resolution is the result of a process that started in May 2003 with the establishment by the World Health Organization (WHO) of a Commission on Intellectual Property Rights, Innovation and Public Health (CIPIH). Following the report by that Commission, the WHO, in 2006, set up an Intergovernmental Working Group on Public Health, Innovation and Intellectual Property (IGWG).

The WHA Resolution invites the Director General of the WHO to coordinate with other relevant international intergovernmental organizations - bearing in mind the respective mandates and capacities of the different organizations and of the WHO - in order to implement effectively the Global strategy and agreed elements of the Plan of action. WIPO has actively supported the WHO Secretariat since the beginning of the process by lending its technical expertise as the United Nations specialized agency dealing with IP issues, and is committed to contributing further to the process by providing, within its mandate and as requested by its partners, all possible support. 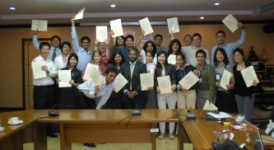 The WIPO Academy took its IP Summer School on the road for the first time in May, with a two week program at Chulalongkorn University in Bangkok, Thailand, which attracted 27 students and young professionals ­from nine countries. The Summer School aims to equip participants with a broad knowledge of international IP issues and an understanding of the value of IP as development tool, as well as introducing the role and functions of WIPO.

Commenting on the program, Mr. FabianHafenbrädl, a student at the Max Planck Institute for IP, Germany, noted, "In my law studies the focus is on the German and EC laws. So the WIPO Summer School helped me to understand the global issues." Ms Zhao Zhao, a Canadian student studying at the George Washington University in the U.S., said, "The Summer School made me realize which areas of IP I am passionate about." While Romeo Jr. A. Sustiguer, a young Filipino professional noted that "Having the WIPO logo on the certificate adds to my credibility as a business technology practitioner."

The European Patent Office (EPO) and the US Patent and Trademark Office (USPTO) have announced plans to launch a trial cooperation initiative called the Patent Prosecution Highway (PPH) in September. The PPH is intended to leverage fast-track patent examination procedures already available in both offices and to reduce duplication by permitting each office to exploit the work previously done by the other office.

"This Pilot is a major step forward in the USPTO-EPO cooperative efforts to manage workloads and will allow us to take advantage of each other's work thereby reducing our backlogs while still maintaining higher patent quality," said Under Secretary of Commerce for Intellectual Property and Director of the USPTO, Jon Dudas.

Under the PPH, an EPO or USPTO applicant whose application contains at least one allowable claim may request that the other office fast track the examination of corresponding claims in corresponding applications. Full requirements for participation in the trial program will be available prior to implementation on the EPO website and the USPTO website.

The purpose of the trial program is to gauge the interest of applicants and determine whether the program meets the goals of improved quality and efficiency and reduced examination workloads. The trial period will be set for one year but may be extended or terminated earlier depending on volume of activity and other factors.

The man who created the distinctive Pringles crisps packaging for Proctor and Gamble has taken his proudest invention with him to the grave. The last wish of retired chemist and food storage technician Frederic J Baur, who died in May at the age of 89, was that he should be cremated and his ashes buried in a Pringles can.


Mr. Baur filed in 1966 for a patent for the tubular Pringles container and for the method of packaging the curved, stacked chips in the container, and it was granted in 1970, according to a Proctor and Gamble archivist.