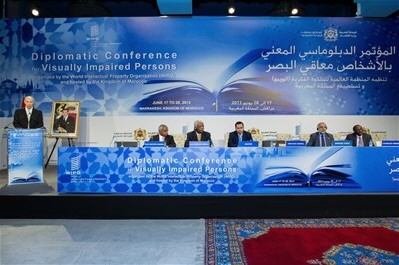 More than 600 negotiators from WIPO’s 186 member states began work today on finalizing a new international treaty to ease access to books for blind, visually impaired, and other print disabled people. The Diplomatic Conference to Conclude a Treaty to Facilitate Access to Published Works by Visually Impaired Persons and Persons with Print Disabilities, convened by the World Intellectual Property Organization (WIPO) and hosted by the Kingdom of Morocco, is meeting in Marrakesh from June 18 to 28, 2013.

A signed treaty would be the culmination of years of discussions on improving access for the blind, visually impaired, and print disabled to published works in formats such as Braille, large print text and audio books. The beneficiaries will have better access to novels, textbooks and other material that they can use for education and enjoyment.

Presenting a message from His Majesty, King Mohammed VI of the Kingdom of Morocco, Morocco’s Minister of Communications and Government Spokesperson Mustapha Khalfi said the Diplomatic Conference is of “crucial importance,” noting: “Now is the time to adopt the Marrakesh Treaty, and we look forward to the endorsement of the first international document in the history of the World Intellectual Property Organization that provides for exclusive exceptions and limitations to copyright as an exceptional measure in copyright doctrine.”

In his message, the King said the absence of a treaty would mean that the blind, visually impaired and print disabled “would remain deprived of the right to equal opportunity,” whereas a successful treaty would not only be a proud moment in WIPO history, it would also “reflect the humanitarian depth of our collective commitment to upholding the values of mutual assistance and solidarity.” The King’s message concluded with a reminder to the international community of the “moral obligation to remove all obstacles which prevent blind people and visually impaired persons from having access to culture, science, modern technology as well as media and communication outlets.”

“In today’s globalized world, your Diplomatic Conference can help give globalization a human face through the adoption of the international treaty you will be discussing in Marrakesh. Such a treaty will enable the blind and the visually impaired to access, research and take advantage of written copyrighted material across the world,” the King’s message said.

WIPO Director General Francis Gurry said: “The objective of the Diplomatic Conference is a relatively simple and straightforward one – to alleviate the book famine that causes over 300 million visually impaired persons, the majority of them in developing countries, to be excluded from access to over 90% of published works.” That objective, he said, would be achieved by establishing an enabling legal framework that will facilitate the production of accessible formats and their exchange across borders.

Mr. Gurry said: “Negotiators have the task of, on the one hand, designing a workable system that will ensure that accessible formats can be produced and exchanged across borders around the world in a simple and easy manner and, on the other hand, providing assurances to authors and publishers that that system will not expose their assets to misuse in parallel markets that are not intended to serve the visually impaired and the print disabled. Their success in finding the right balance will ensure the success of the treaty.”

Negotiators have already made great headway in several negotiating sessions since the first proposals for a draft treaty were originally submitted in May 2009.

The proposal that is the basis of the Marrakesh negotiations would include a requirement for countries to introduce exceptions and limitations in their copyright laws to allow the production of books in accessible formats as well as to permit the international sharing across borders of accessible format copies for people with print disabilities.

Provisional agreement has already been reached on several essential elements of the proposal, including its beneficiaries, namely visually impaired persons, other print-disabled people or those unable because of physical disability to read a standard text.

Member states have also provisionally agreed on key definitions for the works covered by the text and the “authorized entities1” that would provide accessible versions of published works to persons with visual impairment or print disabilities.

But the draft text contains a number of issues which require agreement, such as whether commercial availability of accessible format works will be taken into account in deciding when digital files of such works can be transferred across borders, and how obligations on the scope of limitations and exceptions from previous international copyright treaties will be incorporated into the proposed treaty. Draft text and other material.

Those issues will be the subject of negotiations at the diplomatic conference, which is the traditional method for concluding treaties.

Upon convocation, the diplomatic conference in Marrakesh will meet in two committees to address different types of issues: Main Committee I and Main Committee II. The first committee’s mandate is to negotiate and agree on all substantive provisions and recommend them for adoption by the plenary.

The second committee is charged with negotiating and agreeing on all administrative and final clauses, such as who can join the future treaty and the conditions for its entry into force. Three other side committees are also formed: the Credentials Committee, which verifies credentials of delegations to participate in the conference and to sign the treaty; the Drafting Committee, which ensures the six language versions of the treaty are properly aligned; and the Steering Committee, which includes the chief officers of all the committees and ensures the process is on track.

When all committees finalize their work, the treaty is sent to the plenary for adoption. It is then open for signature. Signing the treaty at the end of a diplomatic conference is a strong indication of intent and commitment by the signatory to join the treaty, although it does not necessarily bind a country to its provisions. The final act – a record that the conference took place – also opens for signature after adoption.

According to the World Health Organization, there are more than 314 million blind and visually impaired persons in the world, 90 per cent of whom live in developing countries. A WIPO survey in 2006 found that fewer than 60 countries have limitations and exceptions clauses in their copyright laws that make special provision for visually impaired persons, for example, for Braille, large print or digitized audio versions of copyrighted texts.

Furthermore, because copyright law is “territorial,” these exemptions usually do not cover the import or export of works converted into accessible formats, even between countries with similar rules. Organizations in each country must negotiate licenses with the rightholders to exchange special formats across borders, or produce their own materials, a costly undertaking that severely limits access by visually impaired persons to printed works of all kinds.

According to the World Blind Union, of the million or so books published each year in the world, less than 5 per cent are made available in formats accessible to visually impaired persons.

International copyright law has always recognized the need to balance the rights of authors of creative works and the public interest, by allowing some uses of copyrighted material to be exempted from the requirement to seek authorization from the rightholder or to pay royalties.

The international copyright treaty that is the starting point for the international copyright framework, the Berne Convention for the Protection of Literary and Artistic Works of 1886, and its subsequent revisions, have all included provision for “limitations and exceptions”. The Berne Convention specifically mentions exemptions for short quotations, news reporting and illustrative use for teaching purposes.

Otherwise, it is left to national governments to define what limitations and exceptions are permitted “in certain special cases, provided that such reproduction does not conflict with a normal exploitation of the work and does not unreasonably prejudice the legitimate interests of the author”.

In practice, limitations and exceptions contained in national laws vary widely. In many countries copying for private use is free, but only a few countries make exceptions for, say, distance learning. Moreover, the exemptions apply only in the country concerned.