Meeting in extraordinary session, the WIPO General Assembly took a landmark decision today to convene a diplomatic conference in 2013 to complete negotiations on a pact to improve access to copyrighted works for the many visually impaired and people with print disabilities around the world. The General Assembly also expressed gratitude to Morocco for its offer to host the diplomatic conference. 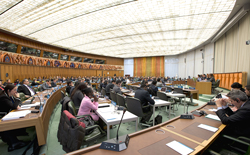 WIPO Director General Francis Gurry welcomed the constructive spirit of engagement among member states and the decision to convene a diplomatic conference in 2013 to agree on the provisions of an international treaty. “Member states took an important decision today in our collective efforts to facilitate access to copyrighted works by the visually impaired and persons with print disabilities” Mr. Gurry said. He added “The future treaty will improve access to published works for millions around the world.” The Director General thanked Morocco’s Permanent Representative to the UN in Geneva, Ambassador Omar Hilale, for his country’s generous offer to host the diplomatic conference.

While some countries have domestic legislation that grants limitations and exceptions for use of copyrighted works by visually impaired and people with print disabilities, there is a legal vacuum at the international level. Since 2004, WIPO’s Standing Committee on Copyright and Related Rights (SCCR) has been considering whether certain limitations and exceptions should be harmonized internationally. WIPO’s General Assembly today decided that discussions relating to a future treaty to benefit visually impaired and people with print disabilities are sufficiently advanced and mature to convene a diplomatic conference. The convening of a diplomatic conference signals entry into the final phase of treaty negotiations.

Some 300 million blind or visually impaired people around the world stand to benefit from a more flexible copyright regime adapted to current technological realities. Individuals with reading impairment often need to convert information into Braille, large print, audio, electronic and other formats using assistive technologies. Only a very small percentage of published books around the world are available in formats accessible to the visually impaired.

The General Assembly also decided to convene a special session of the SCCR in February 2013 to advance work on the text of the draft treaty prior to the diplomatic conference, which will be held in June 2013. At the end of the February SCCR, member states will decide “whether additional work is required with the objective of holding a successful Conference in June 2013.”

The current draft text of the treaty reflects significant agreement among member states, though some differences remain. Among the issues on which member states need to reach agreement are questions relating to commercial availability - in other words, what happens in places where a title is commercially available in an accessible format; and how cross-border transfer of accessible works will take place between countries. Also, member states must agree on how to treat the traditional formulation of the provision for national law limitations and exceptions in the draft treaty text (the so-called three-step test).

At the conclusion of the General Assembly, member states convened the Preparatory Committee of the Diplomatic Conference to conclude a Treaty to facilitate Access to Published Works by Visually Impaired Persons and Persons with Print Disabilities to consider the venue and modalities for the diplomatic conference.