The diplomatic conference to finalize a new treaty for audiovisual performers was successfully concluded on June 26, 2012 as negotiators from WIPO’s member states signed the Beijing Treaty on Audiovisual Performances– so-named in recognition of the city that hosted the final round of negotiations. The new treaty brings audiovisual performers into the fold of the international copyright framework in a comprehensive way, for the first time.

Welcoming the excellent atmosphere that characterized the talks, WIPO Director General Francis Gurry thanked the Government of China and the Municipality of Beijing for the outstanding organization of the Diplomatic Conference on the Protection of Audiovisual Performances which met from June 20 to 26, 2012. He expressed gratitude particularly to the National Copyright Administration of China (NCAC) and the Municipality of Beijing for taking the lead in staging the Diplomatic Conference and for their generosity. 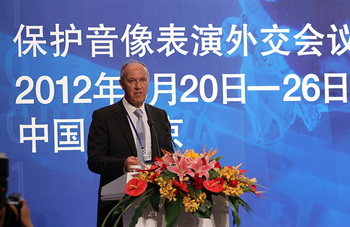 WIPO Director General Francis Gurry: "The conclusion of the Beijing Treaty
is an important milestone toward closing the gap in the international rights
system for audiovisual performers."  (Credit: Yuan Wenming)

The President’s gavel brought an end to over 12 years of negotiations held under WIPO auspices. Mr. Gurry hailed this major development in the history of international copyright as a success of the multilateral system. “The conclusion of the Beijing Treaty is an important milestone toward closing the gap in the international rights system for audiovisual performers and reflects the collaborative nature of the multilateral process,” Mr. Gurry said. He noted that “the international copyright framework will no longer discriminate against one set of performers.”

Mr. Gurry expressed hope that member states would continue to build on the excellent “spirit of Beijing” to take forward the work of the Organization in other key areas.

Speaking at the closing ceremony, Member of the Political Bureau of the Central Committee of the Communist Party of China (CPC) and the Secretary of the CPC Beijing Municipal Committee Liu Qi, described the Treaty as the pride of Beijing. ”Respect for IP is a must,” he said. “We will grasp this opportunity to further strengthen intellectual property and build Beijing as the first city of IP.”

NCAC Minister Liu Binjie, who presided over the Diplomatic Conference, praised the “constructive climate, spirit of cooperation, flexibility and pragmatism demonstrated by all the delegations” and appealed to member states to expedite the process of ratification and accession to the Treaty.

At the opening of the Conference actors from around the world – including American Meryl Streep, Brazilian Sonia Braga, Chinese Mei Baojiu and Spanish actors Javier Bardem and Antonio Banderas – appealed for adoption of the treaty

LATIN ARTIS/FIA Video.  In a closing message, international actors present at the Diplomatic Conference hailed the successful conclusion of the treaty

The treaty will enter into force once it has been ratified by 30 eligible parties, including countries or certain intergovernmental organizations.

Signature of the treaty constitutes a preliminary endorsement by demonstrating the state’s intent to examine the treaty domestically and consider ratification, though signing does not create a binding legal obligation to ratify.

The Beijing Treaty on Audiovisual Performances (BTAP) will strengthen the economic rights of film actors and other performers and could provide extra income from their work. It will potentially enable performers to share proceeds with producers for revenues generated internationally by audiovisual productions. It will also grant performers moral rights to prevent lack of attribution or distortion of their performances.

Importantly, the new treaty will strengthen the precarious position of performers in the audiovisual industry by providing a clearer international legal framework for their protection. For the first time it will provide performers with protection in the digital environment. The treaty will also contribute to safeguarding the rights of performers against the unauthorized use of their performances in audiovisual media, such as television, film and video.

When the International Conference for the Protection of Authors’ Rights was convened in 1883, the delegates of literary societies, artists, writers, and publishers from various nations set out to draft clear and concise articles that would unify the legal framework for literary properties and summarize the principles acceptable to all nations. The resulting Berne Convention succeeded in protecting intellectual property rights for creative works of authors and artists.

The early 20th century saw the development of an entire industry around silent films, and soon after, talking pictures. For the first time, performers - such as actors and singers - were being recorded, and their performances were reproduced and distributed to audiences, both domestically and internationally. This extended the reach of these productions beyond live audiences. This was one reason the Berne Union, the International Labour Organization (ILO) and the United Nations Educational, Scientific and Cultural Organization (UNESCO) formulated the International Convention for the Protection of Performers, Producers of Phonograms, and Broadcasting Organization of 1961 (Rome Convention). While the Rome Convention provided protection for audio performers, it only gave limited rights to audiovisual performers.