. The new building, which looks onto Geneva’s Place des Nations, is the work of award-winning Behnisch Architekten of Stuttgart, Germany. 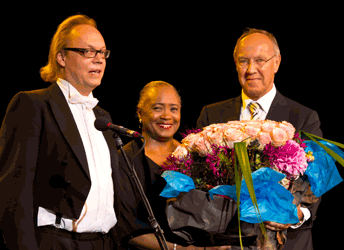 “This is a special occasion in the history of our Organization and we are honored that it is distinguished by the presence of such an inspirational representative of the international artistic community, and one, moreover, who has demonstrated a tireless, life-long commitment to promoting development through the arts – a cause in which we share,” said Mr. Gurry. He paid tribute to Mrs. Hendricks’ work in support of refugees through the cultural foundation, Foundation Etoile d’Azur (Help with Art), and as an Honorary Ambassador for Life of the United Nations High Commission for Refugees (UNHCR).

In describing the new building, Mr. Gurry said it represents everything that an administration should aspire to being: “transparent and open.” Transparency, openness and movement are the defining characteristics of the new building, starting with the wave of color that flows around the façade in eleven shades of blue, through the three glass-roofed atria that are at the heart of the construction, and along the corridors and staircases encircling the atria that channel the movement of people. Mr. Gurry also thanked all involved in the construction project.

Mr. Behnisch, whose design was chosen from among 800 entries in an international architectural competition in 2000, underlined WIPO’s fundamental mission of promoting creativity and innovation through intellectual property. Linking this mission to the new construction, he said “I hope that it will be considered a piece of architecture . . . and something hopefully worthy of the Organization that protects intellectual property.”

Speaking on behalf of the host city, Mr. Muller said Geneva is committed to ensuring an environment in which international organizations can continue to expand and flourish. He said it was particularly important that WIPO is based in Geneva, considering the Organization’s mandate to promote innovation and creativity. He said Geneva was home to many innovation-based companies and organizations.

The new building consists of five floors of offices with some 500 work places, four underground levels, and a 300-seat cafeteria. Construction work began in April 2008 and was completed at the end of 2010. Staff moves into the new building were completed in the summer of 2011.