We are delighted to be able to launch the 2013 Global Innovation Index during the High-Level Segment of ECOSOC.

Innovation is a major contributor to economic growth and the key to economic success in a global economy in which knowledge and intangibles constitute an increasingly important component of production and distribution. It is the source of competitive advantage for enterprises, industries and companies and, as such, increasingly the basis of competition between them. 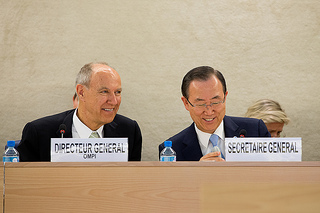 Innovation is also the major source of improvements in the quality of our material life. It is through innovation that we are able to overcome many of the challenges that confront our society. Our capacity to improve health outcomes, especially in relation to new threats, depends on innovation in drugs and treatments. Our ability to ensure food security will depend on innovation in new plant varieties with higher yields and better characteristics of drought- and pest-resistance. And our capacity to move to a greener economy and to overcome the threat of climate change will depend on innovation in clean energy and a host of other new or improved technologies.

Intellectual property plays an essential role in innovation by capturing the economic value of innovation, thereby encouraging investment in research and development (R&D), and by arbitrating between the encouragement of investment in innovation, on the one hand, and the sharing of the social benefit of innovation, on the other hand. An example of this arbitration was the Marrakesh Treaty 1 concluded last week, which will improve access to published works for the blind, visually impaired and print-disabled and permit the exchange of published works in accessible formats around the world, while still preserving the incentive system for publishers to bring new literary and educational works to the public.

Like most things, the capacity to innovate is not shared evenly throughout the world. Unlike primary resources such as petroleum, however, which a country either has or does not have as a permanent feature of its existence, the capacity to innovate can be acquired. It is for this reason that the World Intellectual Property Organization (WIPO) joined INSEAD and, now, Cornell University, in the publication of the Global Innovation Index (GII). The GII aims to provide a blueprint of the inputs and outputs of the innovation ecosystem and to benchmark the respective performances of countries in relation to those inputs and outputs, thereby providing measures that countries may use to review or to improve their innovation capacity.

The particular theme to which a special focus is given in this year’s GII is the local dynamics of innovation. Local hubs or concentrations of universities, enterprises, specialized suppliers and service providers are of great importance in facilitating innovation. We look into the details of these clusters and their impact. It is a theme that is of special relevance to developing countries seeking to move up the value chain and to improve their innovation policies and capacity.

We have been supported and assisted in the production of the GII by several able knowledge partners, namely, Booz & Company, the Confederation of Indian Industry (CII), Du and Huawei. The GII is now in its sixth annual edition. It is rapidly establishing itself as the global reference on innovation for researchers and for public and private sector decision makers. It uses a framework that evolves in response to both the availability of data across a diverse range of countries and our growing understanding of the phenomenon of innovation. We believe that the GII is paving the way for better and more informed innovation policies around the world and we welcome your suggestions of further improvements to it.