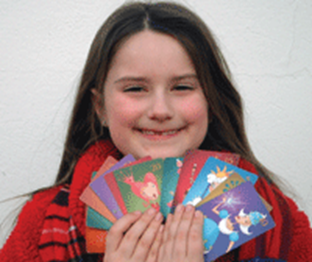 “Miranda is the queen of cards” – TIME magazine (Photo: Courtesy of Evarts family)

The holiday season is the perfect time for family and friends to gather around and play their favorite games – or try out new ones like the Sleeping Queens™. Sleeping Queens, one of the most popular card games in 2008, is proof that even a six-year-old, with the right cards, can become an inventor and license her intellectual property rights (IPRs). The game was created by Miranda Evarts, the first child inventor of a game released on the international market. She came up with the original idea and developed the rules with the support of her family. Miranda then landed a successful licensing agreement with an award-winning game company known as Gamewright®.

The New Jersey girl remembers lying in her bed on a March night in 2003. Not being able to sleep, she let her mind run wild, and found herself thinking about a game where she rescued queens who had fallen under a sleeping spell. In the young girl’s imagination, they were the Starfish Queen, the Rose Queen, and the Pancake Queen. After a while, she jumped out of bed, went to her parents and announced, “I made up a game!” She was tucked back promptly into bed and she eventually fell asleep, but the queens were alive and vivid in her dreams. Indeed, a dream and Sleeping Queens had been born!

The next morning, an enthusiastic Miranda outlined her ideas to her parents, older sister, Madeleine, and baby brother, Stephen. The Sleeping Queens were embraced and adopted as a family project.

“My family and I had been playing lots of card games to help with simple math skills,” Miranda explained. Her mother, Denise Evarts added: “Games bring families and friends together. We have game night at our home about once a week, and when friends visit they should be prepared to play!” 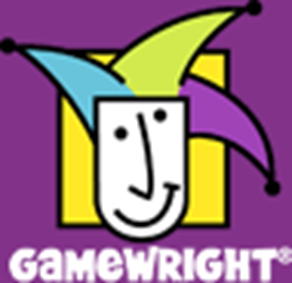 The Evarts started playing the new game by drawing first the queens, then kings, knights and dragons on regular playing cards – adding an entire panoply of characters to introduce more fun. They based the characters on everyday life, concocting the Tie-Dye King, inspired by Mr. Evarts’ tie-dye clothes and the Baby Queen from Mrs. Evarts’ work as a doula (a non-medical childbirth assistant). “We have the Pancake Queen and we always ate pancakes,” explained Madeleine. “It was just our life in cards.”

When they finished developing the full game, Mr. and Mrs. Evarts initiated contact with Gamewright, a Massachusetts-based family games manufacturer. “I knew from the beginning that I wanted to approach Gamewright, because we loved their other games,” said Mrs. Evarts. The company found Sleeping Queens unique and interesting, and requested a prototype. “It didn’t take more than a couple of test sessions to notice that we had a unique game on our hands,” said Jason Schneider, Gamewright Product Development and Marketing Manager.

“They loved the name and idea right away” said Mrs. Evarts. “They told me what they liked and didn’t, and we got back to work. It was not always easy to go back and change things, especially for Miranda, but we kept that vision of the game on the shelf.” 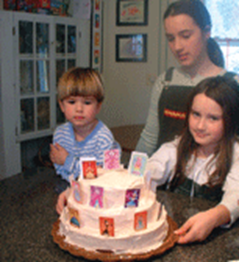 Miranda with her siblings (Photo: Courtesy of Evarts family)

The negotiations with Gamewright over the IPRs went well. “It was actually a very smooth transaction and it only took about six months from idea to license agreement,” explained Mrs. Evarts. Gamewright protects the name Sleeping Queens through a trademark.

Although Gamewright engaged Mr. Jimmy Pickering, a professional illustrator, to make the artwork of the game, the artist used Miranda’s original drawings as the base.

Gamewright receives ideas of several hundred new games a year, but the company chooses only six to eight of them. The licensing agreement itself is thus a testimony of the success of Miranda’s innovative idea.

The game has become popular and appeals to both children and adults alike. Sleeping Queens has become one of the most successful games of Gamewright. According to the National Parenting Center of the United States, “The game play is easy to learn and yet surprisingly full of enough complexities so as to make it challenging for just about any aged player. It takes strategy and on-your-feet thinking to awaken the sleeping queens successfully, before being done in by dragons and evil potions”.

Sleeping Queens has won a number of awards: 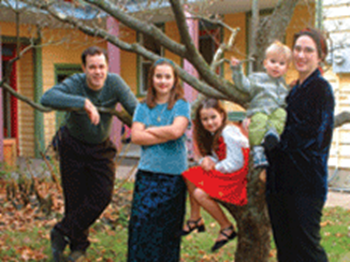 The Evarts believe that games bring families and friends together (Photo: Courtesy of Evarts family)

Following the success of the original English version, Sleeping Queens has been translated into various other languages.

According to Gamewright, the best games are created the way Miranda’s was. However, it is likely that many such games or other innovative ideas do not reach the wider public. It was Miranda’s parents’ smart move to contact Gamewright and eventually come into a licensing agreement that made the young girl’s idea to turn into a popular family game. As for Miranda, her imagination is still running wild, dreaming up new games.