Winemaking is deeply rooted in Georgia’s history, culture and economy. The world’s first cultivated grapevines are thought to have originated in the country’s fertile valleys some 8,000 years ago. The famous 17th century French traveler Jean Chardin wrote that no other country was so rich in the diversity and quality of its wine. It is, therefore, no surprise that wine production is very important for Georgia’s economy. Many households depend on revenue derived from it and with a significant proportion of Georgia’s wines reaching foreign markets it is a key export earner. Strong competition from producers in the world’s other wine-producing countries and the need to expand market access, are fuelling efforts to modernize and improve the industry. This article examines the legal measures taken by Georgia to create a favorable policy environment to uncork the enormous economic potential of the country’s rich wine-producing heritage.

Georgia’s long winemaking history has given rise to unique methods of production, such as, wine made according to the “Kakhetian rule”, where it is aged and stored in a special cone-shaped clay vessel known as a kvevr. Each kvevr holds between 300 and 500 liters and is placed in the ground to help regulate storage temperature, keeping it between 14 and 15°C. Wines produced in this way are noted for their high extraction and tannic content, distinctive aroma and unique taste. These traditional production methods co-exist with more modern “European” techniques, resulting in a wide range of flavor profiles.

Georgia offers excellent soil and climatic conditions for wine production and boasts several wine-producing regions, including, Kakheti, Kartli, Imereti and Racha, each enjoying particular climate and soil conditions that influence the quality of the wines produced. The country is home to over 500 indigenous grape varieties, such as Rkatsiteli, Saperavi, Mtsvane, Khikhvi, Kisi, Tsolikouri, Tsitska, Krakhuna, Aleksandrouli, Ojaleshi, Chkhaveri and Aladasturi as well as a selection of imported varieties including Pinot, Chardonnay and Cabernet Sauvignon. Georgian producers offer wines for every taste - dry to naturally semi-sweet and sweet, dessert and sparkling.

With the adoption in June 1999 of the Law on Appellations of Origin and Geographical Indications, the development of Georgia’s wine sector became an economic priority. The Law sets out the basic procedures for wine production, seeks to ensure the production of the highest quality wines and to protect the market against counterfeit and low-quality products.

It also stipulates that in order to register a product as a geographical indication (GI), it must have specific features arising from its link to particular climate conditions and/or human factors existing in the geographical area of its production. If a product meets these criteria, any natural person or legal entity may file an application for it to be registered as an appellation of origin (AO) or GI. The GIs of other countries, however, may only be registered in Georgia on the basis of an international treaty or agreement. Regulations outlining rules for the identification, registration, use and control of AOs, wines and brandies were adopted by Presidential Decree on February 28, 2002. Legislation is also in place to regulate the nursery industry and encourage sales of approved virus-free rootstocks and grape varieties.

Sakpatenti, the national intellectual property center of Georgia, is responsible for overseeing the implementation of the Law, maintaining a special register of authorized users of AOs and GIs and securing recognition and protection of them in foreign markets.

The role of the Georgian National Wine Agency 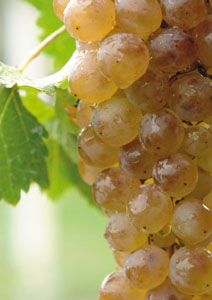 The Georgian National Wine Agency operates under the Ministry of Agriculture – a move designed to ensure broad compliance with established standards – and plays a key role in supporting the development of Georgia’s wine sector and enhancing the quality of its wines. First established in the early 1920s to revitalize the country’s ailing industry, it now regulates all aspects of wine production and ensures that producers comply with production standards. The Agency monitors quality and supports the development of viticulture and winemaking, regulating everything from the breeding of vine grafts and vineyard planning to grape processing, wine production and sales. The Agency is also responsible for overseeing the certification and labeling of quality wines and grants rights to use a registered AO. Its overriding objective is to maintain and improve the quality of Georgian wine on the one hand and to protect the market against low-quality, counterfeit products on the other.

Effective protection of GIs serves a dual purpose. First, it protects the reputation of producers of quality products linked to a specific geographical region, enabling them to differentiate their products in a competitive marketplace, capture the value of local resources, generate higher levels of income and thereby improve livelihoods. Second, GI protection is a means of safeguarding the interests of consumers who can be confident they are purchasing authentic, quality products from a specific region. This has been particularly important in the context of Georgian wine production given the once widespread, misleading practice of blending wines from different regions and selling them under the label of a specific, usually well-known, region.

In bolstering its national legal framework, the Georgian government has created the conditions to support the production of high-quality, value-added products. Not only does this help to boost the country’s earnings from wine exports, but it also supports the sustainability of the sector itself. The promise of higher economic returns is encouraging a growing number of small and medium-sized wine-producing enterprises to spring up in rural communities, creating employment opportunities, supporting traditional winemaking practices and breathing new life into rural economies.

Recognizing the economic importance of leveraging the sector’s export potential, strengthening the international reputation of its wines and expanding into more diverse markets, Georgia decided in 2004 to sign up to the WIPO-administered Lisbon Agreement for the Protection of Appellations of Origin and their International Registration. This paved the way for wider international recognition of Georgia’s stock of GIs creating new opportunities for broader market access.

In an endeavor to avoid overdependence on a single market and to minimize the associated risks, Georgia has been working to expand its presence in global markets. In addition to ongoing negotiations with its neighboring Commonwealth of Independent States (CIS) countries, it recently secured access to the European Union (EU), the world’s largest market. In July 2011, Georgia signed an agreement with the EU on the mutual recognition of GIs that opened the way for its 18 wine-related GIs to be recognized in the EU (see box). While these represent a small proportion of the broad range of wines produced in Georgia’s extensive vineyards, this important development is expected to help further improve the quality of products traded between the EU and Georgia. As many more European consumers experience first hand the character and complexity of Georgian wines, this, it is hoped, will improve brand recognition, enhance the economic value of the sector and spawn new commercial opportunities including, for example in the area of tourism.

While the bulk of Georgian wine is exported to traditional markets in the region, namely, Belarus, Kazakhstan, Ukraine, and the Baltic states, exports to Europe are expanding. They currently stand at around 20 percent per year with an additional 10 percent exported to the United States. In addition to expanding their presence in these markets, Georgian wine producers also have an eye on other markets, including China which is likely to account for much of the future growth of global wine consumption.

In light of the depth and breadth of Georgia’s winemaking tradition and its enormous potential for development, great emphasis is being placed on improving wine quality. This is a key factor in ensuring Georgian producers are able to compete effectively in the crowded global wine market. In an endeavor to expand technical regulation of the sector, and to further enhance the legal operating environment, the government plans to establish a special register of all varieties indigenous to Georgia. This is seen as a means of maintaining Georgia’s ancient winemaking culture and traditions while safeguarding its long-term national economic interests and cultural values.

Georgia’s reputation as a producer of distinctive, quality wines is clearly on the rise. Today Georgian wines are winning top international awards. For example, at the 2011 Hong Kong International Wine and Spirits Fair, the Kindzmarauli Wine Cellar stood out among some 8,000 other wines to win the Grand Prix for its oak-aged Saperavi 2006. Other Georgian wines won a clutch of other awards, including two gold, one silver and 13 bronze medals.

The Economic Impact of Wine Production in Georgia 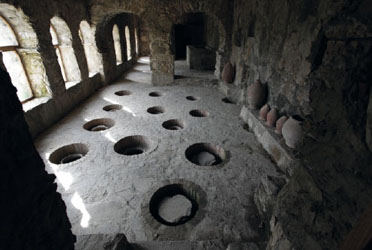 (Photo: Goga Chanadiri)
Kvevrs were traditionally placed in the ground to help regulate storage
temperature, keeping it between 14 and 15°C.

According to the Export Market Development Action Plan - developed jointly by the Ministry of Agriculture, the Wine Association of Georgia and the National Investment Agency - the country currently produces some 150,000 to 200,000 tons of grapes per year. Of these, approximately 30,000 to 40,000 tons are used by registered companies to produce wine for local and export markets. Official figures for the period 2007 to 2010 reveal that 70 registered wine export companies are responsible for exporting some 12 million liters of wine per year. Red wines account for around 70 percent of all exports and the very popular sweet varieties account for over half of all exports. Of the remaining grapes produced, some 15,000 tons are consumed as table grapes and over 100,000 tons are used by non-registered private individuals to make wines for home consumption. This further underlines the significant scope for the future development of the country’s wine sector.

While Georgia remains a small player in the global wine arena, the sector is of great economic significance to the national economy. Georgia’s rich legacy of grape varieties that thrive in the country’s favorable climate and soil conditions offers enormous potential for it to carve a niche as a producer of high-quality distinctive wines and to stand out from the crowd in the highly competitive global wine market. With growing interest in Georgian wines which are beginning to appear in wine stores outside the country, the future looks bright for Georgia’s winemakers.