World Intellectual Property (IP) Day is growing more popular and receiving greater media coverage every year. This year IP Day - April 26 - fell on a Saturday, when many offices were closed. Most took advantage to celebrate the event early: press clippings and activity reports started pouring into WIPO from mid April, and are still coming in. Public and private sector organizations turned their creative talents to finding new ways to attract attention to this year’s themes of innovation and respect for the rights of innovators. In these pages, WIPO Magazine offers a snapshot of the profusion of IP Day activities around the world. 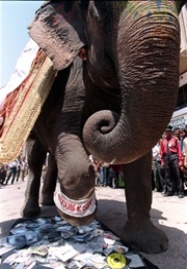 Stamping down on pirate DVDs and CDs in New Delhi! Indian filmmaker Bobby Bedi and other representatives of India’s entertainment industry took their anti-piracy fight from the streets of Delhi to Capital Hill, demanding respect of their IP rights on US territory. 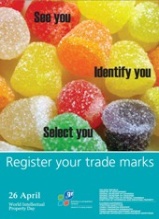 Mouthwatering posters of sugary candy tempted passers-by – young and old – to come in and visit the Hellenic Trademark Office in Athens, Greece.

WIPO’s 2008 IP Day mascot starred in its own webcast animation. The figure caught the popular imagination and featured prominently in many posters and websites.

The gateway to IP Day activities on the homepage of the UK Intellectual Property Office’s website.

The Ghana Anti-Counterfeiting Project distributed car bumper stickers. A campaign led by Ghana’s Food and Drugs Board, Mr. Emmanuel Kyeremanteng Agyarko, warning consumers to look out for fake foodstuffs and medicines and report them to the police, received wide press coverage.

Sakpatenti, Georgia’s national IP center, designed a postcard and sent it to inventors and creators in over 200 different fields of activity all over the country.

The Turkish Patent Institute targeted primary school children with a Now is Thinking Time exhibition, and opened a display of projects created by students in their Technology and Design classes – part of the regular school curriculum.

Major rights holders associations, such as the International Trademark Association (INTA), encouraged their members to observe IP Day by organizing information events for their employees and clients.

Seminar on Biodiversity, Development and Culture and Access to information and knowledge was organized by the University of São Paulo, Brazil.

"Say no to piracy,” chanted marchers in the streets of Karachi, Pakistan, participating in an event organized by Ali & Associates in partnership with the Pakistan Industrial and Intellectual Property Rights Association (PIPRA).