Now in its 11th edition, the GII is a detailed quantitative tool that helps global decision makers better understand how to stimulate the innovative activity that drives economic and human development. The GII ranks 126 economies based on 80 indicators, ranging from intellectual property filing rates to mobile-application creation, education spending and scientific and technical publications.

China's number 17 ranking this year represents a breakthrough for an economy witnessing rapid transformation guided by government policy prioritizing research and development-intensive ingenuity. While the United States fell back to number six in the GII 2018, it is an innovation powerhouse that has produced many of the world's leading hi-tech firms and life-changing innovations.

Highlights from the report 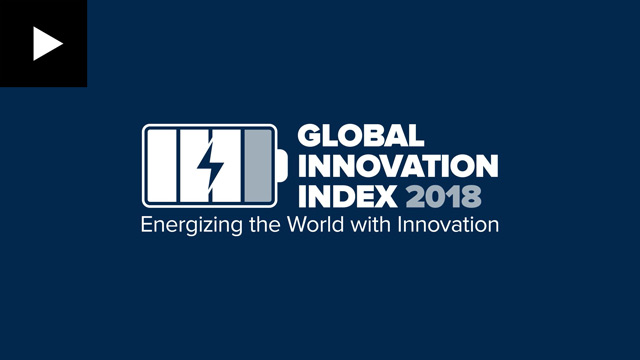 Video: GII partners on "Energizing the World with Innovation". Watch on YouTube 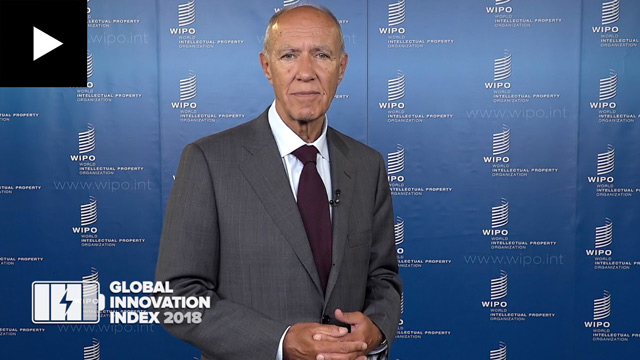 "China's rapid rise reflects a strategic direction set from the top leadership to developing world-class capacity in innovation and to moving the structural basis of the economy to more knowledge-intensive industries that rely on innovation to maintain competitive advantage," said WIPO Director General Francis Gurry. "It heralds the arrival of multipolar innovation".

A group of middle and lower-income economies perform significantly better on innovation than their level of development would predict.

"Over time, a number of emerging economies stand out for being real movers and shakers in the innovation landscape, " said Soumitra Dutta, Former Dean and Professor of Management at Cornell University. "Aside from China, which is already in the top 25, the middle-income economy closest to this top group is Malaysia. Other interesting cases are India, Iran, Mexico, Thailand and Viet Nam which consistently climb in the rankings."

New findings and updates for the GII

Among other notable GII inclusions this year :

The theme of the 2018 GII edition is "Energizing the World with Innovation," looking at the need for expanded innovative work in climate-friendly green technology amid rising energy demands worldwide. Projections indicate that by 2040 the world will require up to 30% more energy than it needs today and conventional approaches to expanding the energy supply are unsustainable in the face of climate change.

"Innovation is clearly necessary to address the energy/environment equation, but let us keep in  mind that such innovation cannot be only technological. New social, economic and business models are required, including through efforts to promote smart cities, mobility solutions based on shared vehicles - and a global citizenry with better information on the impacts of various energy policies." said Bruno Lanvin, INSEAD Executive Director for Global Indices. "Ultimately, we must ensure that the solutions to our energy challenges are suited to local needs, do not entail additional disruptions, and reduce inequalities."

Among GII findings on the state of clean-energy innovation: New technological advancements are needed across the entire energy value chain and public policy will play a central role in guiding the transition to cleaner energy.

"For the energy sector, innovation is critical to companies' strategy. Energy executives are well aware of the shifting ground they face, how well companies innovate using new types of energy and distribution technologies will determine their ability to survive the transformation. This market will be evolving for decades to come. As our research shows, as renewables become more viable, the power industry has the potential of being a bonanza for innovation," said Barry Jaruzelski, Principal at Strategy&, PwC's strategy consulting business, which is one of the GII Knowledge Partners.

Northern America holds two of the top 20 economies in this year's GII.

Eleven of the top 20 innovating economies come from Europe, including the top three: Switzerland (1st), the Netherlands (2nd), and Sweden (3rd).

This year all economies in the South East Asia, East Asia, and Oceania region are ranked within the top 100 in the GII. In this region, Singapore (5), Republic of Korea (12) and Japan (13) are the highest ranked.

India maintains its top place in the Central and Southern Asia region, moving up three spots—from 60th in the GII 2017 to 57th this year. The Islamic Republic of Iran remains second in the region. Kazakhstan is third.

Among lower-middle-income economies, India moves up to the 5th position in the GII rankings. It has also outperformed on innovation relative to its GDP per capita for eight years in a row. India ranks well in a number of important indicators: productivity growth, exports of information and communication technology and services.

"Given its size and innovation development, India has the potential to make a true difference to the global innovation landscape in the years to come. The Indian Government and CII are working closely with the GII team to further improve the Indian innovation performance," said Chandrajit Banerjee , Director General, Confederation of Indian Industry, another GII Knowledge Partner.

Israel (11) and Cyprus (29) achieve the top two spots in the region for the sixth consecutive year. The United Arab Emirates is 3rd.

Latin America and the Caribbean

"The Global Innovation Index is very important to building and perfecting Brazil's innovation policies, once it points out our improvements opportunities and also our strengths. It is also a vital instrument to the definition of new policies. With the new upcoming industrial revolution, innovation gains a new weight in the development and competitiveness of nations and Brazil should head towards that path," said Robson Andrade, president of CNI. "Small businesses are a fundamental economic and social force for the development of our country, and innovating is strategic in the search for more competitiveness in the Brazilian economy, " said Heloisa Menezes, technical director in the exercise of the presidency of Sebrae. CNI and Sebrae are also GII Knowledge Partners.

South Africa takes the top spot among all economies in the region, followed by Mauritius and Kenya.

For several GII editions, a number of Sub-Saharan African economies perform relatively well on innovation when comparing performance to level of economic development.

About the Global Innovation Index

The Global Innovation Index 2018 (GII), in its 11th edition this year, is co-published by Cornell University, INSEAD, and the World Intellectual Property Organization (WIPO, a specialized agency of the United Nations).

Published annually since 2007, the GII is now a leading benchmarking tool for business executives, policy makers and others seeking insight into the state of innovation around the world. Policymakers, business leaders and other stakeholders use the GII to evaluate progress on a continual basis.  The study benefits from the experience of its Knowledge Partners: Confederation of Indian Industry, PwC's Strategy&, and the National Confederation of Industry (CNI) and Brazilian Micro and Small Business Support Service (Sebrae), as well as of an Advisory Board of international experts.

The core of the GII Report consists of a ranking of world economies' innovation capabilities and results. Recognizing the key role of innovation as a driver of economic growth and prosperity, and the need for a broad  vision of innovation applicable to developed and emerging economies, the GII includes indicators that go beyond the traditional measures of innovation, such as the level of research and development.

To support the global innovation debate, to guide polices and to highlight good practices, metrics are required to assess innovation and related policy performance. The GII creates an environment in which innovation factors are under continual evaluation, including the following features:

The index is submitted to an independent statistical audit by the Joint Research Centre of the European Commission. To download the full report visit: http://www.globalinnovationindex.org.

Knowledge Partners believe in the role of innovation in increasing the competitiveness of nations, enabling economic growth, driving societal changes and building the foundation of a country's future.

They are committed to producing a valuable and non-partisan resource. Knowledge Partners support the elaboration of the GII; contribute analytical chapters or case studies to the GII Report; and participate in the discussion and dissemination of the GII results.

The Confederation of Indian Industry (CII) works to create and sustain an environment conducive to the development of India, partnering industry, Government, and civil society, through advisory and consultative processes. CII is a non-government, not-for-profit, industry-led and industry-managed organization, playing a proactive role in India's development process. Founded in 1895, India's premier business association has around 9,000 members, from the private as well as public sectors, including SMEs and MNCs, and an indirect membership of over 300,000 enterprises from around 265 national and regional sectoral industry bodies.

Strategy& is a global team of practical strategists committed to helping you seize essential advantage. We do that by working alongside you to solve your toughest problems and helping you capture your greatest opportunities. We bring 100 years of strategy consulting experience and the unrivalled industry and functional capabilities of the PwC network to the task. We are part of the PwC network of firms in 158 countries with more than 236,000 people committed to delivering quality in assurance, tax, and advisory services.

The National Confederation of Industry (Confederação Nacional da Indústria – CNI) Brazil is the official and highest-level organization representing Brazilian industry. Since its founding in 1938, CNI has defended domestic business and manufacturing interests, acting as the main interlocutor with the executive, legislative, and judicial branches of government, as well as with various organizations and entities in Brazil and around the world. CNI represents Brazil's 27 state-level federations of industries and 1,250 sectorial employer's unions, to which almost 700,000 companies are affiliated with. In addition, it directly administers the following organizations: Social Service of Industry (Serviço Social da Indústria – SESI), the National Service of Industrial Training (Serviço Nacional de Aprendizagem Industrial – SENAI) and the Euvaldo Lodi Institute (Instituto Euvaldo Lodi – IEL).

Brazilian Micro and Small Business Support Service - Sebrae - is a non-profit private entity with the mission of promoting the sustainable and competitive development of small businesses. Through its experience Sebrae has become an expert in small business development in Brazil. Its role is to foster entrepreneurship, providing guidance to help small businesses to grow and generate more employment, helping to develop Brazilian economy. It has a network of almost 700 onsite service centers throughout the country, counting on more than 5,000 small business experts and a large pool of external consultants working towards transferring knowledge and know-how to those who own or intend to start a company.

Cornell University is a privately endowed research university and a partner of the State University of New York. As the federal land-grant institution in New York State, we have a responsibility -unique within the Ivy League - to make contributions in all fields of knowledge in a manner that prioritizes public engagement to help improve the quality of life in our state, the nation, the world. Cornell University has created a reimagined model for business education that reflects the future of business itself: flexible, collaborative, and cross-disciplinary. Cornell SC Johnson College of Business unites the strengths of three accredited business schools — the Charles H. Dyson School of Applied Economics and Management, the School of Hotel Administration, and the Samuel Curtis Johnson Graduate School of Management so that every student can benefit from the combined power of business at Cornell: more degrees, faculty, resources and expertise. Whether solving real-world challenges, or deeply immersing in a particular industry, Cornell SC Johnson College of Business offers something unique, meaningful and lasting.