Senior decision-makers from governments, law enforcement, Customs and the private sector gather in Istanbul, Turkey, for the Seventh Global Congress on Combating Counterfeiting and Piracy, to seek innovative responses to the illicit trade in counterfeit and pirated goods.

Over 850 delegates from more than 100 countries are attending the three-day meeting from 24 to 26 April that is being chaired by the World Customs Organization (WCO) and hosted by Turkish Customs with the support of the Union of Chambers and Commodity Exchanges of Turkey.

United around a common goal to stop the trade in counterfeit and pirated products, the organizers and participants aim to share experiences and devise strategies to counteract this global phenomenon and the harm these goods can have on consumer health and safety, as well as intellectual property rights (IPR).

Along with the WCO, the Congress is convened by INTERPOL and the World Intellectual Property Organization (WIPO) in cooperation with the world’s business community represented by the International Chamber of Commerce (ICC) through its Business Action to Stop Counterfeiting and Piracy (BASCAP) initiative, and the International Trademark Association (INTA).

The Seventh Global Congress was officially opened by H.E. Recep Tayyip Erdoğan, the Prime Minister of Turkey, who said that counterfeiting and piracy is an important source of funding for terrorism which not only affects the stability of Turkey but also of the entire region and underlined that the fight against counterfeiting and piracy requires cooperation at the global level.

Turkish Minister of Customs and Trade H.E. Hayati Yazıcı pointed out that “IPR plays a crucial role in fostering intellectual and technological developments, as well as in research and development activities. The protection of IPR is also essential, given the considerable negative repercussions generated by the trade in counterfeit and pirated goods on the economy and on the health and safety of consumers”. “I am delighted that this Congress is being held in Turkey as it constitutes an important step in attaining Turkey’s goals in the field of IPR protection," he declared. 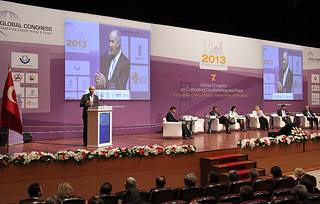 WCO Secretary General Kunio Mikuriya highlighted the fact that “the proliferation of actors involved in the production, distribution and sale of counterfeit and pirated goods has now reached a scale unforeseen a decade ago. These individuals or organized networks pay little or no attention to the rule of law, fair business practices, legitimate wealth and job creation, national borders, consumer safety or public health”. “They are innovative and to thwart them we must out-innovate them. We must work to bring increased transparency to every international supply chain transaction, disrupt illicit production and distribution, continue to rigorously pursue, prosecute and dismantle networks, and, most importantly, we must do much more to educate consumers. These remain formidable challenges and this Congress gives us the opportunity to pull together experiences, knowledge and ideas,” he added.

“Neither innocent citizens, nor INTERPOL member countries have the luxury to wait for the global economy to turn around and until more government funds can be found to fight illicit trade. Through private-public partnerships INTERPOL has been able to generate revenue while maintaining our independence to dismantle organized crime groups that counterfeit and smuggle products,” said INTERPOL Secretary General Ronald K. Noble. “We have seen the strong partnerships between the public and private sectors, other affected industries and government stakeholders make an overwhelming difference. We must continue working together to address these evolving challenges and find increasingly innovative solutions. The necessity for joint action has not diminished; on the contrary, it is greater than ever before,” concluded the INTERPOL Chief.

WIPO Director General Francis Gurry stated that “Counterfeiting and piracy remain major problems worldwide, fuelled by socio economic variables such as poverty, ambivalent consumer attitudes towards intellectual property rights, the involvement of criminal networks and easy-access to illegal goods, particularly through digital media. Despite solid legal and institutional frameworks, more needs to be done to achieve better compliance with the existing intellectual property systems, to ensure that these systems fulfill their role as a force for innovation and creativity. Building respect for intellectual property will underpin efforts in this regard.” He added that “the Global Congress is an excellent opportunity for like-minded organizations to pool their efforts to help safeguard the creative and innovative fabric of our societies.”

INTA President Toe Su Aung said "Counterfeiting is a global challenge that affects industry, consumers and governments, and requires cooperative, international solutions. The Global Congress is a unique opportunity to work side by side with our partners in government, enforcement agencies and NGOs and together, find new ways to combat this damaging and illegal practice.”

“While efforts to combat counterfeiting and piracy have increased, much more needs to be done,” according to Shelley Duggan, Co-Chair of ICC/BASCAP and Associate General Counsel, Brand Protection for the Procter & Gamble Company. “International criminal networks are accelerating the globalization of counterfeiting and piracy, and this trend must be stopped. A new report from BASCAP and the United Nations Interregional Crime and Justice Research Institute (UNICRI) shows how laws allowing for confiscation of the Proceeds of Crime can be used as an effective deterrent, and we look forward to collaborating with INTERPOL, UNICRI and others at the Congress to promote these legislative provisions to national governments. The Congress also will address the critical roles and responsibilities of intermediaries in securing vulnerabilities in the supply chain which allow criminals to get involved. This Congress provides an effective public-private dialogue to address these issues and others that can lead to further progress in stopping the harm done by the trade in illicit goods.”

The President of ICC Turkey Rifat Hisarcıklıoğlu stressed that the Turkish private sector has set demanding goals for the 100th anniversary of the foundation of the Turkish Republic in 2023. “We are aware that these goals can only be achieved through an innovative and developed industrial sector and a productive and technology-oriented society. A strong intellectual property system is also a prerequisite for achieving them. I therefore attach great importance to the exchange of information that is being facilitated via this Conference,” he said.

Under the theme “Evolving challenges - innovative responses”, discussions at the Global Congress will cover a broad range of issues including counterfeit trade trends and patterns, the latest initiatives in building respect for IPR, an inclusive approach to addressing the transnational organized crime dimension, new approaches adopted by developing markets and efforts to address internet sales, as well as the impact of new technology on law enforcement practices.

About the Global Congress

The Global Congress on Combating Counterfeiting and Piracy represents a unique, international public-private sector partnership that is united in its efforts to identify solutions to the growing menace of the illegal trade in counterfeit and pirated goods, and facilitate their implementation.

The Congress has become a leading international forum for shaping practical strategies to combat counterfeiting and piracy. It is led by a Steering Group that is chaired on a rotating basis by the WCO, INTERPOL and WIPO.

These international gatherings have provided a valuable platform for representatives from both the public and private sectors to pool their experience, raise awareness, enhance cooperation and identify strategies to deal more effectively with the global problem of counterfeiting and piracy.

Details of previous meetings are available at the permanent Global Congress website.