India’s Minister for Commerce and Industry Anand Sharma today deposited his country’s instrument of accession to the Madrid Protocol for the International Registration of Marks at WIPO, bringing the total number of members of the international trademark system to 90. The treaty will enter into force with respect to India on July 8, 2013. The Madrid System for the International Registration of Marks (Madrid system) offers trademark owners a cost effective, user friendly and streamlined means of protecting and managing their trademark portfolio internationally. 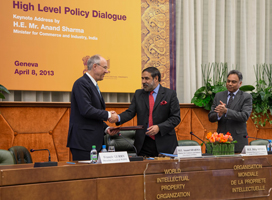 Minister Sharma said “We recognize that this instrument will provide an opportunity for Indian companies, which are increasing their global footprint, to register trademarks in member countries of the Protocol through a single application, while also allowing foreign companies a similar dispensation.”

WIPO Director General Francis Gurry welcomed India’s accession, noting that “India’s accession to the Madrid system is a major milestone in bringing us closer to transforming the Madrid System into a system with truly global reach.” He noted that “India’s participation in the Madrid system gives brand owners around the world the ability to extend their protection to the important Indian market, through a single, simplified and cost-effective procedure.”

India is the 14th of the G-20 economies to accede to the Madrid Protocol. Mr. Gurry said “India’s accession to the international trademark system, as with the recent accessions by Colombia, Mexico, New Zealand and Philippines, signals an era of significant geographical expansion of the Madrid system, which offers greater benefit to right holders worldwide.”

Mr. Sharma also took part in a high level policy dialogue at WIPO, where he spoke on the subject “Innovation and Development: The Indian Experience.” Members of the Geneva diplomatic community, including ambassadors, took part in the dialogue.

Under the WIPO-administered Madrid system, a trademark owner may protect a mark in up to 88 countries plus the European Union with its Community Trade Mark (CTM) by filing one application, in one language (English, French or Spanish), with one set of fees, in one currency (Swiss Francs). Applicants wishing to use the Madrid system must apply for trademark protection in a relevant national or regional trademark office before seeking international protection. An international registration under the Madrid system produces the same effects as an application for registration of the mark in each of the contracting parties designated by the applicant.

If protection is not refused by the trademark office of a designated contracting party, the status of the mark is the same as if it had been registered by that office. Thereafter, the international registration can be maintained and renewed through a single procedure. Thus, the system provides a cost-effective and efficient way for trademark holders to secure and maintain protection for their marks in multiple countries.