Strong Growth in Demand for Intellectual Property Rights in 2012 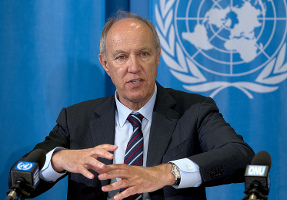 )2. Chinese telecommunications company ZTE, with its 3,906 published PCT applications, was the largest filer in 2012.3

“As in previous years, demand for WIPO’s international IP filing systems increased despite a weak economic climate,” said WIPO Director General Francis Gurry. “As we begin to see signs of a recovery, those companies that built strong portfolios of intangible assets during the downturn will benefit the most from new market opportunities.” 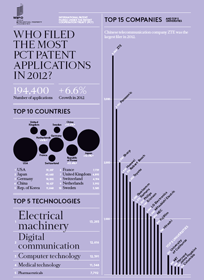 Infographic: Who filed the most PCT patent
applications in 2012?

With 3,906 published applications, ZTE Corporation of China, was the largest filer of PCT applications in 2012 (Annex 3

The University of California, with 351 published applications, was the largest filer among educational institutions in 2012 (Annex 4

), followed by the Massachusetts Institute of Technology (168), Harvard University (146) and Johns Hopkins University (141). The top 50 PCT applicants for educational institutions include 27 US universities and 6 each from Japan and the Republic of Korea.

PCT filings by field of technology

Electronic machinery with 13,293 published applications – or 7.5% of the total – overtook digital communications (7.1%) as the field of technology in which the largest number of PCT applications were published in 2012. Computer technology (7%) and medical technology (6.4%) also accounted for large shares of total applications (Annex 5 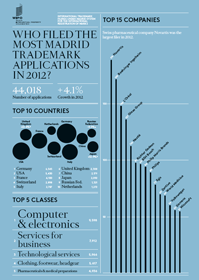 Infographic: Who filed the most Madrid
trademark applications in 2012?

). Boehringer Ingelheim Pharma of Germany ranked second (160 applications), followed by L’Oreal of France (138), Glaxo Group of the UK (127) and Nestlé of Switzerland (105). Among the top Madrid applicants, Glaxo Group (+76), L’Oreal (+71), Boehringer Ingelheim Pharma (+62) and World Medicine of Turkey (+61) saw the largest increases in filings in 2012. BMW of Germany (-41), Janssen Pharmaceutical of Belgium (-35), Abercrombie & Fitch of Switzerland (-29) and Philip Morris of Switzerland (-22) saw the largest declines in filings. The top 30 Madrid applicant list includes 13 companies from Germany and 8 from France.

In 2012, the total number of designations and subsequent designations in international registrations increased by 1.3% (Annex 8

). China was the most designated Madrid member, accounting for 6.1% of total designations, followed by the European Union (EU) and the Russian Federation (both with 5.1%), the US (5%) and Switzerland (4.1%). Among the top 10 designated members, China (+7.5%) and the Russian Federation (+6%) saw the largest growth in designations received, while Switzerland (-1.7%) was the only top 10 designated member to record a decline. Certain middle-income countries, such as Tajikistan (26.8%), Kazakhstan (18.4%), Turkmenistan (11.1%) and Mongolia (10.1%), also saw fast growth in designations received in 2012.

Among the top 20 classes, the two with the highest growth rate over the previous year were Class 42 (covering services provided by, for example, scientific, industrial or technological engineers and computer specialists), which increased by 8.4%, and Class 33 (covering alcoholic beverages (except beers)), which grew by 7.3%. 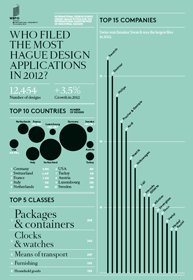 Infographic: Who filed the most Hague
design applications in 2012?

). Daimler AG of Germany (75) ranked second, followed by Koninklijke Philips Electronics of the Netherlands (67), Procter & Gamble Company (57) and Audi AG of Germany (54) – the latter appearing in the top Hague applicant list for the first time. Procter & Gamble filed 110 fewer applications in 2012 than in 2011. Gillette Company of the US (-27) and Vestel of Turkey (-21) also filed considerably fewer applications in 2012. Daimler AG (+20), Saverglass of France (+20), Hermes Sellier of France (+14) and Thun SPA of Italy (+14) saw the largest increases in applications. The top 25 Hague applicant list includes eight companies from Germany and six from Switzerland.

Industrial design registrations relating to packages and containers for the transport or handling of goods accounted for the largest share of total registrations (Class 9; 10.6%), followed by clocks and watches and other measuring instruments (Class 10; 9.9%), means of transport or hoisting (Class 12; 8.5%) and furnishing (class 6; 8.2%). Among the top 20 classes, lighting apparatus (Class 26; +50%) and means of transport or hoisting (Class 12; +46.8%) saw the fastest growth in applications in 2012, while pharmaceutical and cosmetic products (Class 28; -35.2%) saw the largest decline (Annex 13

Background information on the PCT, Madrid and Hague systems

The PCT system facilitates the acquisition of patent rights in multiple jurisdictions. It simplifies the process of multiple national patent filings by delaying the requirement to file a separate application in each jurisdiction in which protection is sought. However, the decision of whether or not to grant patents remains the prerogative of national or regional patent offices, and patent rights are limited to the jurisdiction of the patent granting authority. The PCT system now has 146 member states.

For data updates and additional analysis on the performance of the PCT system in 2012, consult the PCT Yearly Review: The International Patent System in 2012, which will be published on WIPO’s Intellectual Property Statistics website in April 2013.

The Madrid system makes it possible for an applicant to apply for a trademark in a large number of countries by filing a single international application at a national or regional IP office of a country/region that is party to the system. It simplifies the process of multinational trademark registration by reducing the requirement to file an application at the IP office in each country in which protection is sought. The system also simplifies the subsequent management of the mark, since it is possible to record further changes or to renew the registration through a single procedural step.

For data updates and additional analysis on the performance of the Madrid system in 2012, consult the Madrid Yearly Review: International Registrations of Marks, which will be published on WIPO’s Intellectual Property Statistics website in May 2013.

The Hague system makes it possible for an applicant to register industrial designs in multiple countries by filing a single application with the International Bureau of WIPO. By allowing the filing of up to 100 different designs per application, the system offers significant opportunities for efficiency gains. Moreover, it simplifies the process of multinational registration by reducing the requirement to file separate applications with the IP offices of each Hague member country/region in which protection is sought. The system also streamlines the subsequent management of the industrial design registration, since it is possible to record changes or to renew the registration through a single procedural step.

For data updates and additional analysis on the performance of the Hague system in 2012, consult the Hague Yearly Review: International Registrations of Industrial Designs, which will be published on WIPO’s Intellectual Property Statistics website in April 2013.