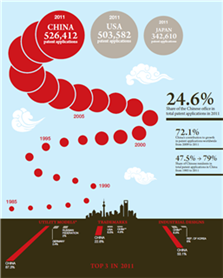 A new WIPO report shows that while the global economy continued to underperform, intellectual property (IP) filings worldwide kept growing strongly in 2011. It also finds that China’s patent office became the largest in the world, as measured by the number of patent applications received. Before 2011, China already accounted for most filings of utility models (UMs), trademarks and industrial designs.1

World Intellectual Property Indicators 2012 shows that patent filings worldwide grew by 7.8% in 2011, exceeding 7% growth for the second year in a row. Similarly, UM, industrial design and trademark filings increased by 35%, 16% and 13.3%, respectively.

“Sustained growth in IP filings indicates that companies continue to innovate despite weak economic conditions. This is good news, as it lays the foundation for the world economy to generate growth and prosperity in the future,” said WIPO Director General Francis Gurry.

China’s State Intellectual Property Office (SIPO) overtook the United States Patent and Trademark Office (USPTO) in 2011 to become the largest patent office in the world, after having surpassed the Japan Patent Office (JPO) in 2010. In the 100 years before 2011, only three patent offices – Germany, Japan and the United States - had occupied the position of largest office.

In the Report’s foreword, Mr. Gurry points out that “even though caution is required in directly comparing IP filing figures across countries, these trends nevertheless reflect how the geography of innovation has shifted.” 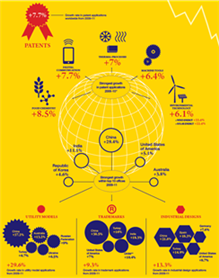 Data by applicants’ country of origin show that residents of Japan filed the largest number of applications (472,417) across the world in 2011. China, which saw 41.3% growth in 2011, overtook the US to become the second largest country for origin counts.

The field of digital communication saw the highest average annual growth rate (+8.1%) between 2006 and 2010. Filings for pharmaceuticals have continuously declined since 2007.3 Computer technology accounted for the largest number of applications (126,897) filed worldwide.4

An estimated 670,700 UM applications were filed across the world in 2011, corresponding to a 35% increase on 2010. Filings at SIPO accounted for most of this increase. Residents of Japan and the US filed the largest numbers of UM applications abroad, of which a large proportion were received by SIPO.

Applications grew by 13.3% in 2011, while application class counts saw a 9.6% increase. Rapid growth in filings in China has been the main contributor to growth in recent years. In 2011, China accounted for 61.8% of growth worldwide.

German applicants filed more than 2.1 million equivalent applications worldwide in 2011.6  Residents of China (1.4 million), the US (1.3 million) and France (1.0 million) were the only three other origins to have filed more than a million applications each. The bulk of Chinese filings were filed domestically. In contrast, the majority of the applications originating in Germany, France and the US were filed abroad.

_______________________
1. Like patents, UMs protect inventions for a limited period of time. However, the terms and conditions for granting UMs are different from those for “traditional” patents. In certain countries, UMs are known as “petty patents”, “short-term patents” or “innovation patents”.
2. The income groups correspond to those used by the World Bank. Economies are divided according to 2011 gross national income per capita.
3. The micro-structure and nano-technology field saw 11% growth in 2011, but it accounts for a relatively small number of applications (988 applications in 2011).
4. Technology data are a combination of those taken from the WIPO Statistics Database and the PATSTAT database of the European Patent Office (EPO) (using the April 2012 edition of the PATSTAT database). The latest available data are for 2010.
5. Class counts refer to the number of classes specified in trademark applications. Offices use either single- or multiple-class filing system. Class counts account for this institutional difference and thus enable better comparisons of filing figures across offices.
6. The concept of equivalent applications takes account of the fact that an application at a regional office can cover multiple jurisdictions. Equivalent applications data are expressed in terms of class counts.
7. The International Convention for the Protection of New Varieties of Plants (UPOV Convention) provides a sui generis form of intellectual property protection (plant variety protection or breeders’ rights). In order to obtain protection, the breeder needs to file individual applications for breeders’ rights with the authorities entrusted with the task of granting breeders' rights.