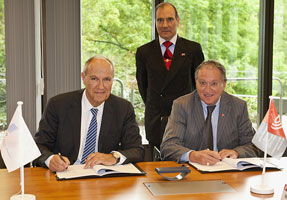 With the aim of further developing the international patent system to better support innovation in economies around the globe, the European Patent Office (EPO) and the World Intellectual Property Organization (WIPO) have agreed on a comprehensive three-year technical co-operation scheme.

The agreement, signed by EPO President Benoît Battistelli and WIPO Director General Francis Gurry in Munich today, is the first of its kind between the two institutions, and specifically aims at improving the procedural framework of the Patent Cooperation Treaty (PCT) with a view to increasing its use by patent applicants. Moreover, co-operation also focuses on enhancing the quality and efficiency of the patent granting process, including patent classification and searching, and improving access to patent information.

"This agreement ushers in a new epoch in the already long-standing relationship between the EPO and WIPO," Mr. Battistelli said. "As leading international authorities in patents and IP, our organizations have a particular responsibility to promote the development of efficient structures and procedures in the international patent system in order to facilitate the grant of high-quality patents. Creating a barrier-free patent information system and improving the dissemination of technological information to the public are a further essential step to foster innovation with the help of the patent system."

Mr. Gurry said: "WIPO and the EPO are strategic partners in the delivery of first-class services to support the innovation programmes of industry, universities, public research institutions and small- and medium-sized enterprises. This agreement will enhance the successful technical cooperation that exists between WIPO and the EPO. That cooperation is based first and foremost on a shared vision of the PCT as the core work-sharing platform of the international patent system. WIPO looks forward to the continued support of the EPO based on the long-standing European tradition of multilateralism.”

The agreement foresees establishing annual work plans of co-operation activities in areas of mutual interest surrounding the PCT. Among the deliverables are the fully electronic exchange of PCT documents and an enhanced digital exchange of patent information products.

As an international treaty that enables the filing of a patent application in some 140 countries simultaneously, the PCT route administered by WIPO is the only one that allows innovators to file for patent protection at global level. Carrying out some 70,000 patent searches related to patent applications filed under the PCT ─ about 40% of the total ─ originating both from Europe and from other regions, the EPO is by far the largest International Searching Authority (ISA) under that scheme.

The European Patent Office (EPO) is one of the largest intergovernmental institutions in Europe and, with almost 7,000 employees, is one of the largest patent authorities in the world. Its headquarters are in Munich and it has offices in Berlin, Brussels, The Hague and Vienna. The EPO was founded with the aim of strengthening co-operation between the European states in the field of invention protection. Through the EPO's centralized patent granting procedure, inventors are able to obtain patent protection in the 38 member states of the European Patent Organisation, covering a territory of nearly 600 million inhabitants.

The World Intellectual Property Organization (WIPO) is a specialized agency of the UN dedicated to developing a balanced and accessible international intellectual property (IP) system which rewards creativity, stimulates innovation and contributes to economic development while safeguarding the public interest. It has a mandate from its 185 member states to promote the protection of intellectual property throughout the world through cooperation among states and in collaboration with other stakeholders.

WIPO’s activities fall broadly into three areas, namely, the progressive development of international IP law, IP capacity-building programs to support the efficient use of IP, particularly in developing countries, and services to industry which facilitate the process of obtaining IP rights in multiple countries and alternative dispute resolution options for private parties.