A new WIPO report analyzing intellectual property (IP) trends in 2008 and 2009 shows that innovative activity and demand for IP rights dipped during the global economic crisis, but began to recover this year. World Intellectual Property Indicators 2010 also documents how the uncertainty associated with the crisis led companies to readjust their innovation strategies.

While the bulk of the report focuses on 2008 data (the last year for which complete worldwide statistics are available), a special section on the economic crisis looks at preliminary IP filing data for 2009 for the largest IP offices. These data reveal a drop in patent, trademark, and industrial design applications at many of these offices. In the majority of cases, non-resident applications were more negatively affected by the crisis than resident applications, suggesting a greater short-term focus on home markets (see Annex 1).

WIPO Director General Francis Gurry observed: “The experience of the first six months of 2010 points to a modest recovery in PCT applications and a stronger rebound in Madrid international registrations.”

“The post-crisis innovation landscape will invariably look different from that of a decade ago,” Mr. Gurry added. “While the strength of the recovery remains uncertain, there will likely be a continuing geographic shift of innovative activity toward new players, especially in Asia.”

Data on R&D expenditure compiled for the report show that, on average, companies started to reduce their R&D budgets from early 2009 onward.

Data for publicly listed firms indicate a slowdown in year-on-year growth from 2007 to 2008, but reflect an actual decrease in R&D expenditure between 2008 and 2009 (-1.7%). However, the average hides substantial company-by-company variations (see Figure 1). Several of these companies reported substantial growth in R&D expenditure including a number of pharmaceutical firms. 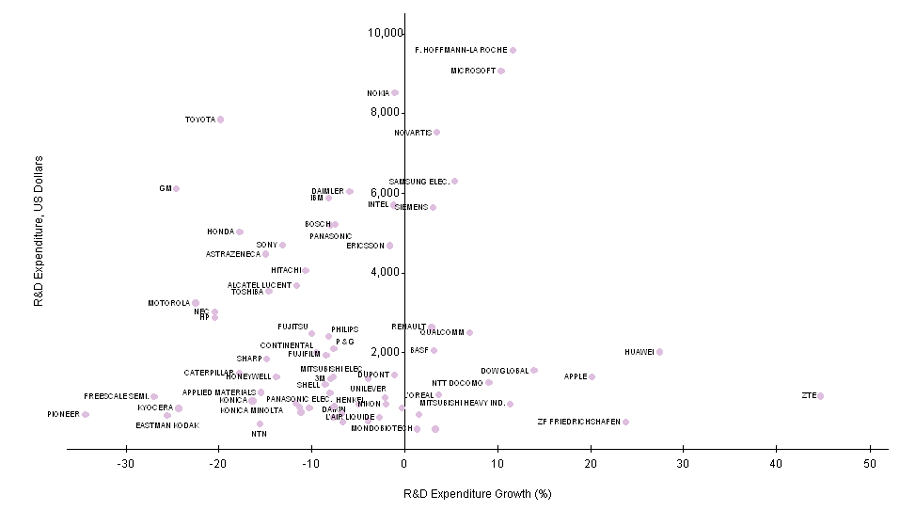 Preliminary 2009 data show a drop in patent filings at most offices except for that of China, which exhibited growth of 8.5% in applications (see Figure 2). Taken together, the total number of patent applications filed at the nine patent offices listed in Figure 2 decreased by 2.9% in 2009, compared to 2008. As these offices accounted for around 84% of worldwide patent filings in 2008, an actual drop in the 2009 world total is likely.

Reflecting the weaker economic conditions, total trademark applications declined by 0.9% in 2008 – the first decrease since 2001. The drop in demand for trademarks is largely due to decreases in the number of applications filed by residents of China, Japan, Spain and the US.1

The available 2009 data for selected offices provide a mixed picture of the demand for trademarks. China and France recorded considerable growth in trademarks filings, while Germany, Japan and the US reported a drop. (Figure 2).

In 2009, Madrid system international registrations declined by 12.3%, representing the first decrease since 2002-03 and being primarily due to a fall in applications from residents of France, Germany and the US.

Growth in total industrial design applications, albeit at a slower pace

The number of international registrations under the WIPO-administered Hague system increased by 10% in 2009, which is below the growth rate of the previous year (33%).

The report also highlights other trends in the global IP system.

There was a slowdown in the growth of patent grants in 2008. The total number of grants across the world is estimated at 780,000 in 2008, representing a 0.6% increase from 2007. The slowdown is largely explained by a substantial drop in grants at the patent offices of the Republic of Korea (-32.5%). Without the substantial growth of grants in China, there would have been a contraction of total worldwide patent grants in 2008.

Around 6.7 million patents were in force across the world in 2008, representing a 5.3% increase over 2007. Patents in force in China and the Republic of Korea saw double-digit growth at 24% and 10.1%, respectively. Residents of Japan and the US owned around 48% of total patents in force in 2008

The worldwide number of utility model applications (313,000) and grants (238,000) grew by 15.3% and 12.2%, respectively, in 2008. The high growth in worldwide utility model activity despite the challenging global economic conditions is due to inventors from China continuing to expand their use of this form of intellectual property. In particular, utility model applications in China increased by 24.4% in 2008. Utility models are a form of IP similar to patents, but they usually have a shorter term of protection and less stringent eligibility requirements.

Several countries accounted for substantial numbers of trademarks in force in 2008, notably Japan (1.7 million), the US (1.4 million), and France (1.1 million).

For countries where data are available, France accounted for the largest number of designs in force in 2008, with around 400,000. However, China with a 40% growth rate is expected to surpass France in 2009. A large number of industrial designs were also in force in the European Union’s Office for Harmonization in the Internal Market, Germany and Japan – each accounting for more than a quarter million industrial designs in force.

Note: 1 = data for calendar year and 2 = data for fiscal year. Patent applications filed at the EPO are considered as non-resident applications. OHIM (Office for the Harmonization in the Internal Market).  Source: WIPO Statistics Database