Video of the press conference,

Audio of the press conference (MP3)

“International trademark filings took a hit in 2009,” said WIPO Director General Francis Gurry, “this is not surprising given the difficult financial conditions and restrained consumer demand facing companies around the world.  While trademark protection is sound business practice in good times and bad, companies are more cautious about bringing new products to market when economic uncertainty is high.  That said, trademarks and the brands they underpin play a key role in value creation and provide the basis for business expansion when the economy recovers.”

Mr. Gurry noted “Historically, we know that demand for intellectual property rights declines in periods of recession.  These downturns are more strongly and rapidly felt in the area of trademarks which are more closely tied to market conditions.  Demand for intellectual property rights, however, had reached unprecedented levels prior to the crisis and we have every reason to believe that international trademark activity will pick up as economic growth solidifies and broadens.”

In 2009, the EU moved up two places to become the second largest user of the Madrid system.  Norway moved from 21st to 19th position, the ROK moved from 30th to 23rd position, Hungary from 27th to 25th position, and Singapore from 33rd to 28th position.

Developing countries accounted for 1,973 filings representing 5.6% of the total.  Within this category, the highest growth rates were seen in the ROK with a 33.9% increase, and Singapore with a 20.5% growth rate.

In May 2009, the number of international trademark registrations topped one million when Austrian “eco” company Grüne Erde, which specializes in natural wood, textile and cosmetic products, registered its mark.

Madrid Union members were notified of 303,344 new designations (contained in new registrations or territorial extensions) in 2009, representing a 20% decrease compared to 2008 again reflecting the generally flat global economic conditions.  When submitting an international trademark application, applicants must designate those member states in which they want their mark to be protected.  Applicants can also extend the effects of an international registration to other members at a later date by filing a subsequent designation.  In this way, the holder of an international registration can expand the geographical scope of the protection of a mark in line with evolving business needs.

The top six in the ranking of most designated member states remained unchanged.  China (with 14,766 designations) continues to be the most designated country, followed by the Russian Federation, USA, Switzerland, the European Union and Japan.

Profile and Costs of Registrations Recorded in 2009

In 2009, on average, about seven Madrid Union members were designated per registration by applicants seeking international trademark protection under the Madrid system. More than half (62%) of these registrations sought protection in five or less export markets.

In submitting a trademark application, an applicant has to specify the goods or services to which the trademark will be applied in accordance with an international classification system known as the “Nice Classification”.  The most popular classes of goods and services in international trademark registrations recorded in 2009 were Class 9 (covering, for example, computer hardware and software) representing 8.3% of the total, Class 35 (covering services such as office functions, advertising and business management) which represented 7.1% of the total, Class 42 (covering services provided by for example, scientific, industrial or technological engineers and computer specialists) which represented 5.6% of the total;  Class 5 (covering mainly pharmaceuticals and other preparations for medical purposes), Class 25 (covering clothing, footwear and headgear) and Class 41 (covering services in the area of education, training, entertainment, sporting and cultural activities) each represented 4.7% of the total.

The Madrid system allows for the central administration of an international trademark portfolio, as it provides for procedures which enable trademark holders to record modifications to international registrations (for example, changes of ownership, changes in name or address of the holder or changes in the appointment of the representative of the holder) through the submission of a single request to WIPO.  Modifications recorded in 2009 totaled 90,136 representing a 1.3% decrease over 2008.

Over half a million (515,562) international registrations were active in the International Register at the end of 2009, containing some 5.6 million active designations and representing a 2.4% increase relative to 2008.  These registrations belong to 169,939 right holders who are mostly small and medium-sized enterprises.

Membership of the Madrid System

The total number of member states of the Madrid system (governed by the Madrid Agreement (1891) and the Madrid Protocol (1989)) remains 84. After the ratification of the Madrid Protocol by Egypt, and the accession to the Protocol by Liberia and Sudan, the number of contracting parties of the Protocol has risen to 81.  This means that now only three countries are bound by the Madrid Agreement only.  An expanding membership and an ever wider geographical spread of the system make it a more attractive option for businesses operating in international markets.

Of the total number of international applications filed in 2009, 35.7% were transmitted to WIPO electronically;  the transmitting trademark offices were those of Australia, Benelux, EU, Republic of Korea, Switzerland and the USA.

The WIPO-administered Madrid System for the International Registration of Marks offers a trademark owner the possibility of having a mark protected in up to 84 countries by filing one application, in one language (English, French or Spanish), with one set of fees, in one currency (Swiss Francs).  Applicants wishing to use the Madrid system must apply for trademark protection in a relevant national or regional trademark office before seeking international protection. An international registration under the Madrid system produces the same effects as an application for registration of the mark in each of the contracting parties designated by the applicant.  If protection is not refused by the trademark office of a designated contracting party, the status of the mark is the same as if it had been registered by that office.  Thereafter, the international registration can be maintained and renewed through a single procedure.  Thus, the system provides a cost-effective and efficient way for trademark holders to secure and maintain protection for their marks in multiple countries.

Growth rates as compared to 2008

Trademarks in Force in the International Register (by December 31, 2009) 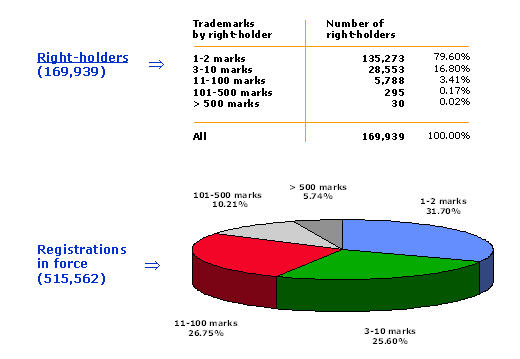 * Belgium, Luxembourg and the territory of the Kingdom of the Netherlands in Europe have a unified legislation on trademarks and a common Office for the registration of trademarks under that legislation (Benelux Office).
Under the Madrid system, protection shall be requested as if they were one country (Benelux).
Their designation shall be subject to payment of a single complementary or individual fee.