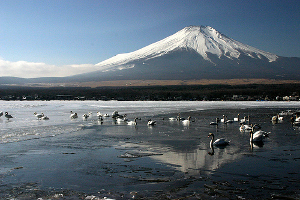 After working for many years as a carpenter specializing in building shrines and temples in Yamanashi prefecture, Japan, Mr. Takashi Ishikawa grew concerned at the rising death rate in the region due to cerebral stroke. Many Japanese houses at the time – especially those in rural areas – had poor insulation and heating, making them ill equipped to handle the cold Yamanashi winters. Mr. Ishikawa wondered if this was a contributing factor to the rising death rate, and thought that if houses were warmer, people would have more comfortable living conditions and would be at less risk of cerebral stroke.

Not content to stand idly by, in April 1970 Mr. Ishikawa quit his job, raised approximately US $50,000 in startup capital and formed IG Kogyo Co., Ltd. (IG Kogyo), a small venture with the goal of developing a technology to better insulate homes. Tapping into his knowledge and experience as a carpenter, Mr. Ishikawa already had an idea for this new technology. The inside of a house would become warmer, he surmised, if strong iron plates with some added heat insulating functionality were used for the exterior walls. While he knew what he wanted to create, he did not know how, as he was unsure of what material could be combined with the iron plates to provide an insulating effect. 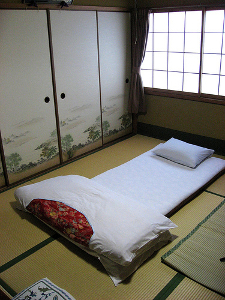 Mr. Ishikawa's idea came to him while in the warmth of his futon (Photo: Luke Robinson)

One early winter morning shortly thereafter, Mr. Ishikawa was resting soundly in the warmth of his futon (Japanese bedding) as snow was lightly falling outside his home. The contrast between his warm futon and the cold that was permeating through the rest of his house got him thinking. What was making his futon so warm? Lying there on that cold morning, his mattress caught his attention. He realized that because the mattress was doing such a good job of blocking the cold seeping through the floor, his futon was nice and warm, and that it was ultimately the stuffing of the mattress that was providing such good insulation. Mr. Ishikawa knew little about mattresses, but he did know that the stuffing of his mattress was made with an ingredient called urethane, and he realized it might just be the material he was looking for.

Long before the days of the Internet and the constant stream of interconnected information, Mr. Ishikawa had to be resourceful if he was going to find out more about this interesting material. He realized that one of the best places in Japan at the time to find information on new technologies was the Japan Patent Office (JPO). Wasting little time, he went to the JPO’s office in Tokyo and consulted patent documents, where he was able to obtain a great deal of valuable information on urethane. He discovered that urethane is made by adding a foaming agent to resin materials called polyol and polyisocianate and then mixing them with a machine. Urethane is also one of the main ingredients in polyurethane, a foam material that is used to create many different products such as cushions and footwear.

Pouring over the patent information on urethane, Mr. Ishikawa became convinced that a construction material combining iron plates with urethane would produce a revolutionary material to be used in exterior walls. However, a large foreign company owned the patent rights to urethane. Upon closer examination of the patent, Mr. Ishikawa saw that it was set to expire in June 1971, and the term of its related patents had expiration dates in June 1973. This was extremely good news to Mr. Ishikawa, as he knew that once the patents were expired, he could he could use urethane to create his new exterior building material.

While he was waiting for the patents to expire, Mr. Ishikawa started research and development (R&D) into how urethane could be used for a wall building material. One problem with urethane used in mattresses such as his is that the material is very soft, making it unsuitable for an insulating material in exterior walls. Mr. Ishikawa had to find a way to make the material harder. He found that when urethane is made into a product such as a mattress, it is combined with other chemicals, such as polymers. During this combination, a catalytic agent is added, which modifies the chemical reaction rate between the main ingredients but maintains chemical equilibrium. The modification by the catalytic agent is usually acceleration of the chemical reaction process. In the case of urethane, the hardness of the resulting product is dependent on the speed of the chemical reaction, and therefore the catalytic agent is an integral part of the process. With this new knowledge – obtained from patent documents – Mr. Ishikawa discovered that a harder version of urethane could be produced by simply changing the catalytic agent.

Mr. Ishikawa thought that it would be better to try and introduce his idea to a larger company with the necessary R&D and manufacturing infrastructure already in place. He approached numerous Japanese companies, including large steel manufacturers, but none of them showed any interest. His idea was too eccentric for the steel and construction material manufacturers of the time. Left with no other option, Mr. Ishikawa was determined to bring his idea to fruition, and in 1973 he started IG Technology Research Center (IGTRC), which focused on developing a harder version of urethane that could be used as an insulator in exterior siding. His early attempts repeatedly failed, and on several occasions he nearly gave up.

After a long period of trial and error, he was finally able to develop a technology that sped up the chemical reaction, thus significantly accelerating the solidification speed of urethane. Before Mr. Ishikawa’s research, urethane was used in some construction products, but manufacturing costs were prohibitively expensive thus keeping the product out of reach of the average consumer. Mr. Ishikawa’s newly developed technology cut costs of urethane manufacturing, which meant that it would be within reach of average consumers for use as a construction material. Neglected by larger companies, Mr. Ishikawa’s hard work had paid off. He now had a revolutionary new product in hand, and was on the cusp of changing the way buildings were constructed throughout Japan.

Building on the success of IGTRC, IG Kogyo continues to place great importance on R&D into all of its new products. The success of the company’s R&D is even more amazing considering it was based in a rural area at a time when information flowed much slower. With the age of the Internet, combining patent information with R&D has become even more important for the company. “We no longer need to visit the patent office to acquire patent information,” Mr. Ishikawa said, “but can just access it via the Internet. By combing through patent information, one can grasp the trends of not only the industry, but also of society. As long as one gathers information in an organized manner, there is no handicap to a company’s being located in a provincial area.”

As of early 2011, the company manufactures products for businesses and general consumers, and it ensures that it develops products that meet the needs of its customers. While it always keeps abreast of the latest technological advances in exterior siding, it also keeps up with changes in aesthetic design. Shortly after developing its first products, it created a “Wide Type” version which proved to be very successful. The company never abated in its R&D, and has since developed exterior siding products to meet specific building types that come in Japanese and Western styles, as well as in many different color variations.

From combing through numerous patent applications at the JPO in the mid 1970s, Mr. Ishikawa was well aware early on of the importance of the intellectual property (IP) system. The company places significant importance on securing IP rights (IPRs) for its inventions as well as its various product designs. As of early 2011, the company has over sixty approved patent and industrial design applications with the JPO (and more pending), and a particularly unique application was made in 2009 for a strong, insulated siding panel that is also fireproof.

In order to protect its company image, it has applied for and received trademark registration for four different stylistic versions of its company name with the JPO. The first trademark application was made in 1974, and the company extended its most recent application in 2006.

IG Kogyo wasted little time in commercializing the new invention, and companies involved in construction from all over Japan started to show interest in the new technology. In 1977, the company started manufacturing its unique exterior siding made with urethane insulation. The siding was metallic, with the special urethane insulation secured in the center. Once released, it proved to be a massive success, but Mr. Ishikawa and his team were constantly refining it to make an even better product. “The sales grew out of nowhere while we were absorbed in product development,” explained Mr. Ishikawa.

The company’s first products targeted individual homeowners and small construction enterprises, but the popularity of the siding exponentially increased demand. In 1989, the company developed larger siding panels with even better insulating properties that could be used in a variety of commercial and industrial applications. With sales rapidly increasing, the company soon found that it needed more factories and offices throughout Japan, and by late 2010 it had four manufacturing factories and eleven offices throughout the country.

IG Kogyo’s unique use of patent information, R&D and the IP system has had resounding success for the company. Starting out as only a dream that no one would listen to, as of early 2011 IG Kogyo has a forty percent market share of the exterior siding industry in Japan. The company has raised its capital to over US $3.1 million. IG Kogyo has also received certification from the International Organization for Standardization (ISO), with ISO 9001 certification for quality management practices in 2000 and ISO 14001 certification (minimal negative environmental impact) in 2003, 2004 and 2007 for its factories.

In a bid to promote the use of insulated metal siding, IG Kogyo was a founding member of the Japan Medal Siding Industry Group, an organization established in 1976 to promote the development and adoption of insulated metal siding. Through IGTRC, the company has also won multiple awards in Japan for its use of the IP system, among which was the 2004 award for the Excellent and Practical Use of Industrial Property Rights from the Japan Ministry of Economy, Trade and Industry. In 2006, the JPO selected IGTRC as one of the top 100 Japanese companies effectively using industrial property rights (IPRs). Through its creative use of patent information and the IP system, the company has become renowned as a “patent strategy” type of company.

From a Dream to Reality

Mr. Ishikawa could have hardly expected that his idea that cold winter morning would launch his fledgling company to the forefront of the construction industry in Japan. Through creatively learning about the inventors that came before him and then using the IP system to protect his own inventions, Mr. Ishikawa turned his dream to help people into a reality, and changed the construction industry in Japan along the way.