RELMÓ S.A. (RELMÓ) is an Argentinean seed company belonging to the Ferrarotti family. The origins of RELMÓ are to be found in the Ferrarotti Countryside Organization (OFPEC) which was established in the 1960s as the first company in Argentina to devote itself to the genetic improvement of soybean. OFPEC was responsible for the program that led to the registration of the first Argentinean soybean “variety” (a plant grouping within a single botanical taxon of the lowest known rank) in 1980.

RELMÓ’s business strategy concentrates on the production and sale of plant seeds of mainstay crops: soybean, wheat and maize. Its activities are conducted throughout the Argentinean agricultural and livestock industry. Its central offices are in Rosario, Santa Fe, a major grain marketing, soybean grinding center and seed export zone. In fact, the most important soybean producing-exporting center in the world is to be found in an area within a radius of 200 kilometers around Rosario.

Despite its traditional approach in certain areas (e.g. the company’s main experimental field remains the Ferrarotti family farm), RELMÓ has dramatically changed its way of doing business and has managed to prosper following some of the important changes that took place in the Argentinean seed industry since the mid-1990s. One of the main reasons for RELMÓ’s success has been its ability to manage its intellectual property (IP) successfully and to establish partnerships with foreign and domestic companies and research institutes.

The Argentinean Law No. 20.247 on Seeds and Phytogenetic Creations, guarantees ownership of plant varieties, and the Argentinean Association of Protection for Plant Breeds (ARPOV) deals with the defense of rights and provides the possibility for collecting royalties for IP rights holders. Additionally, Argentina’s accession to the 1978 Act of the International Union for the Protection of New Varieties Convention (UPOV Convention) plays an important role in the development of companies such as RELMÓ.

One of RELMÓ’s major areas of work is the genetic improvement of soybean. The company’s market position, however, was seriously challenged when Monsanto, a multinational agricultural biotechnology corporation, started commercializing the Round-up Ready (RR) gene (RR technology allows for the use of herbicide without any adverse effect on the crops) in Argentina during the mid-1990s. The RR gene-based plant varieties soon became popular among farmers. RELMÓ was quick to realize that to retain its market position, they would have to market RR varieties too. Therefore RELMÓ reached an agreement with Monsanto Argentina that authorized its use of the RR gene. This agreement also allowed RELMÓ to place its soybean varieties in other countries.

As far as maize is concerned, due to the high degree of adoption of transgenic (genetically engineered) forms of maize in Argentina, RELMÓ signed a testing agreement with Monsanto in order to work with MON 810, a maize variety based on the Bt gene (gene of a naturally occurring bacteria that produces a protein toxic to certain types of insects. The Bt gene can be transferred to crops, thereby making them more resistant to the corresponding insect). 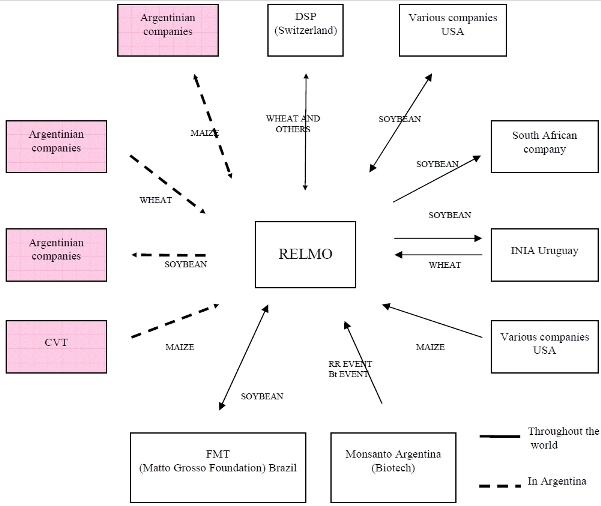 Flow of RELMÓ’s licenses and services with domestic and foreign partners (Source: WIPO-UPOV/SYM/03/13)

RELMÓ has registered over a dozen trademarks. Among them, the most important ones are RELMÓ, TECNOSOJA, TECNOTRIGO and TECNOMAIZ. The company has also registered the name with which it identifies its lines of products, such as CANAI. Trademark registrations are done primarily for the domestic market with Argentina’s National Institute for Industrial Property (INPI), as varieties that are licensed to foreign companies, for example American companies, are generally sold under the licensee’s trademark.

The growth of RELMÓ in recent years is essentially based on license agreements linked to IP. It has been capable of negotiating licenses for its own varieties and those created by third parties to other companies in Argentina and abroad.

Agreement with the National Institute of Agriculture Technology (INTA) of Argentina:In 2002, RELMÓ concluded an agreement on technology transfer with INTA for the genetic improvement of subtropical germplasm of maize. Under the Agreement, INTA provides the germplasm, installations and technical staff, and RELMÓ covers the operating expenditures. The hybrids obtained are marketed exclusively by RELMÓ while INTA receives a percentage royalty as the owner of the germplasms. This unique public-private agreement also allows RELMÓ to produce the hybrids with its own trademark and also to license them out to third parties.

Licensing Agreement with the National Livestock Research Institute (INIA) of Uruguay: INIA and RELMÓ have a special deal under which INIA has granted RELMÓ exclusive rights over the licenses for INIA’s wheat varieties in Argentina. In return, RELMÓ has authorized similar rights to INIA for soybean varieties from RELMÓ. This license agreement allows RELMÓ to enter the wheat seed market with adapted varieties at a cost roughly equivalent to that of developing its own crops, however at a much quicker pace. INIA benefits from the expansion of the market for its wheat varieties. For RELMÓ, this is a very good commercial opportunity; RELMÓ has typically focused on soybean sown in summer, but the incorporation of the seeds of winter crops from INIA allows them to expand their sales structure and to generate more revenue. The scheme of licenses for soybean varieties to INIA, with a view to market them in Uruguay, has similar results for both parties.

Licensing-out to South African companies: In the past, RELMÓ had granted licenses for conventional varieties in South Africa, and, more recently, it has done so for RR varieties, thereby contributing to the development of the crop in that country. As in previous agreements, RELMÓ is the owner of the varieties and a South African company exploits them commercially.

Partnership with Delley Semences et Plantes (Seeds and Plants) S.A. (DSP) of Switzerland: RELMÓ established a commercial relationship with DSP in Switzerland, which includes licenses for varieties of wheat for the whole of South America and technical collaboration, including the training of RELMÓ staff in Switzerland. Like in the Agreement with INIA, the varieties here are also owned by DSP, and RELMÓ is responsible for commercial exploitation. The agreement allowed RELMÓ to access the Argentinean market with high quality wheat varieties.

Partnership with the Mato Grosso Foundation (FMT) of Brazil: Brazil and Argentina constitute a major market for the production of soybean in the world. FMT provides important technical support for the crop in Brazil, where approximately 16 million hectares are cultivated. RELMÓ has established a program of work which includes the joint launch of varieties of soybean, which is carried out in both countries. This joint project does not involve any licenses but an ambitious joint development of varieties and research on disease resistance, as well as cultivation technology.

Integration with Sursem S.A.: In April 2009, RELMÓ reached an agreement with Sursem S.A., another Argentinean seed company. Based on this agreement, Sursem has taken over the responsibility of the distribution of seeds for RELMÓ in Argentina. Sursem will build upon the existing marketing structure of RELMÓ and improve its services to customers and distributors. For its part, RELMÓ will be integrated into Sursem and will focus on research programs and improvement of soybean and wheat to meet Argentinean requirements. It will at the same time continue its technology exports to neighboring countries.

Starting as a small family business, RELMÓ has come a long way to establish itself as a pioneer in the genetic improvement of soybean in Argentina. The partnership strategy that RELMÓ pursued not only enabled it to retain its market position in Argentina, but also provided it with improved plant varieties, access to foreign markets and consequently higher revenue. The integration with Sursem allows RELMÓ to concentrate more in research and development while at the same time assuring it of the much-needed market access at home and abroad.

A strategic partnership approach through licensing and intelligent use of IP was the key factor behind RELMÓ’s success. While the national and international legal framework facilitated the task of ensuring the ownership of phytogenetic creations (varieties or lines), the partnerships helped RELMÓ move forward quickly and very actively in retaining and extending its domestic and foreign market positions.