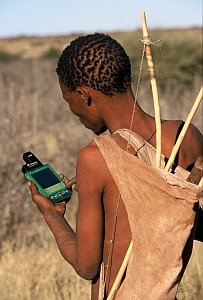 The CyberTracker provides a high-tech method of tracking animals in the field (Photo: Eric Vandeville)

A hand-held computer, connected to a satellite navigation system, provides a high-tech method of tracking animals in the field. Combining ancient tracking skills with modern technology, a new innovation called CyberTracker™ has the potential to protect some of the most endangered members of the animal kingdom. The technology is being used in major parks such as the Karoo National Reserve in South Africa as part of a major conservation project.

The vast area of the Kalahari Desert has been the home for the Bushmen, the oldest inhabitants of Southern Africa, for more than 20,000 years. Traditionally living on hunting and gathering in the harsh surroundings of the Kalahari, the Bushmen are considered to be the best trackers in the world; they can immediately identify, from the faintest marks on the sand, the species of an animal as well as its sex, age, speed of movement and so on. Their survival in the Kalahari has been possible by developing skills in tracking, and an enormous amount of information about animal movement is stored in their collective traditional knowledge.

Louis Liebenberg, a South African anthropologist with a deep passion for nature, has spent a significant part of his life studying and researching tracking techniques. He himself is highly skilled in tracking, and has lived with the Bushmen to further master his skills. While working with the Bushmen, he realized the power of lessons passed on to these indigenous people from their ancestors. At the same time he felt that the art of tracking was on the verge of extinction due to the fast diminishing hunting grounds in the Kalahari. Consequently, the Bushmen could no longer live as hunter-gatherers; they needed alternative means, alternative jobs. The only way to provide a livelihood for the indigenous group would be through incorporating tracking into a modern profession. A natural researcher, Liebenberg thought that if he could find a way to “capture” the information about animal movements stored in the minds of the Bushmen, it could revolutionize wildlife management and conservation initiatives and greatly contribute to scientific exploration of wildlife behavior. Involving the master tracker Bushmen, would also provide them, at least partially, much-needed income generating opportunities.

Liebenberg decided to put more effort on this idea and in 1996 he teamed up with Justin Steventon, a computer science student, and Karel Benadie, a tracker working in Karoo National Park in South Africa. The same year, the team developed the CyberTracker – a software that takes animal tracking to the cyber-age. Liebenberg successfully combined Kalahari Bushmen tracking techniques with cutting edge computer and satellite technology. They used the CyberTracker to record the movements and behavior of black rhino, a highly endangered species. The results were later published as a journal article. The CyberTracker software is basically a mobile data capture solution that can be used by non-technical people. It can be used on third party GPS-enabled devices such as smart phones and handheld computers for recording observations of animal movements quickly and easily. The screen interfaces can be customized in accordance with one’s data collection needs.

The use of CyberTracker can be very efficient in monitoring wildlife, animal behavior, lifestyle changes, etc. Data collected by using the CyberTracker on Lowland Gorillas, for example, showed the extent of these primates’ mortality due to the Ebola virus. Lowland Gorillas’ vulnerability to Ebola was largely unknown until the monitoring through CyberTracker showed a significant difference in their population before and after the human Ebola outbreak in 2003.

As a small organization, the Conservation believes that a too wide R&D scheme may prove inefficient and therefore its activities focus on a limited number of pilot projects. The organization identifies new research areas relevant to its core goal of improving environmental management, assuming that its successful pilot projects offer better options of replication for other organizations.

As a non-profit organization, the Conservation depends on funding from other organizations. The European Commission (EC) is one of the most important funding sources of the Conservation; the CyberTracker Monitoring Program was funded entirely but the EC. One-fourth of the funding was spent in the R&D sector while the rest was allocated for implementing the program in about 60 projects in 15 African countries including Congo, Gabon and South Africa.

Liebenberg’s initiative to develop the CyberTracker technology was motivated by his passion for nature and the environment, and the vision of his non-profit Conservation is promoting the development of a worldwide network for environmental monitoring. Because of this broad goal, Liebenberg believes that although CyberTracker could be successfully commercialized, it does not necessarily mean that it should be. Wildlife and environmental conservation, he believes, is best served from his technology when it is kept in the public domain. CyberTracker is therefore available through freely downloadable software that can be used in a handheld device, such as a smart phone or a PDA. Only the name of the technology, CyberTracker, is registered as a trademark with the United States Patents and Trademarks Office (USPTO). Although CyberTraker is a freeware and hence not patented, the trademark registration facilitates the product’s promotion and ensures its authenticity, which contributes to Libenberg’s objective of environmental conservation.

CyberTracker’s success is eminent from the huge demand of the software: by 2010 more than 35,000 users have downloaded the software. The Conservation’s internet site receives more than 5,000 visitors per month from all over the world.

The impacts of CyberTracker on wildlife conservation have been significant. Many protected areas and reserves use this unique technology: the Kruger National Park in South Africa, for example, uses 125 CyberTracker units. An Ebola virus outbreak in Congo in 2003 and its impact on antelopes and Lowland Gorillas were identified through the use of CyberTracker.

CyberTracker contributes to educational and scientific research activities through its non-invasive method of collecting information. Some other uses include promoting ecotourism, controlling poaching and even for the police to catch criminals.

The local Bushman communities benefit from this technology in several ways. As tracking is increasingly being used in a wide variety of activities, there are demands for skilled trackers. It creates employment opportunities for the Bushmen, not as unskilled laborers but as trackers with special expertise. The traditional knowledge of tracking is also revived and retained through its incorporation into the CyberTracker technology.

CyberTracker’s contribution in environmental monitoring and wildlife conserving was recognized when Liebenberg was honored with the prestigious Rolex Award for Enterprise in 1998. Rolex offers this award to individuals in recognition of their outstanding contribution to the betterment of mankind.

From its origins in the Kalahari Desert, Liebenberg’s CyberTracker has spread all over the world in wildlife conservations and beyond. The key factor behind Liebenberg’s success has been his interest, from the very beginning, to innovate so that he can stimulate livelihood development among the Bushmen and at the same time utilize their traditional knowledge in conserving wildlife.