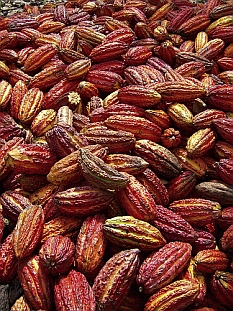 The climate, geography and human resources in the sea-locked part of the Aragua valley in the north of Venezuela combine to produce first class criollo cocoa. Among all the varieties of cocoa, criollo is often referred to as the most noble and is used as the basis for some of the finest chocolates in the world. In the plantation of Chuao, one of the first villages founded in Venezuela in the middle of the sixteenth century, unique soil conditions and a microclimate including high equatorial humidity and heavy rains (that wash rich and fertile silt down the mountainsides into the 140-hectare plantation) create perfect cocoa growing conditions.

This enables a skilled, geographically-isolated population, whose life has centered on cocoa production for more than 300 years, to coax a high-quality bean from the criollo. Although said to give the most subtle, sweet and complex beans, criollo trees are very difficult to farm and are particularly susceptible to disease. Expert caring and specific geographic conditions are essential for coaxing the high-quality beans from these trees which are the least productive of all cocoa varieties.

The Chuao plantation, situated within the boundaries of one of Latin America’s oldest national parks (the Parque Nacional Henri Pittier Rancho Grande), is owned by the local community and managed by the community’s own cooperative, the Empresa Campesina de Chuao (Campesina). The cooperative comprises around 100 farmers who tend the trees and harvest, dry, and ferment the delicate beans, carefully manufacturing cocoa paste and cocoa nuggets entirely by hand – with no artificial additives or flavorings. Ingeniously improvised dams and irrigation systems made of banana leaves ensure that the cocoa trees receive sufficient water.

To the local indigenous people, Chuao cocoa is not just an agricultural product; it represents much more. It is their life, their identity, their pride. For them, the cocoa nuts that they have planted, bred and selected for centuries are inseparable from their lives, their culture, their land, and their language. This holistic concept is a large part of what makes Chuao cocoa so special.

Appellation of Origin and Branding

In order to protect this considerable national asset, an application (No. 00-14373) for recognition of Chuao as an appellation of origin (AO) was filed in Venezuela on August 10, 2000 by Campesina. The Declaration of Recognition was granted and published in the Official Journal of Industrial Property of Venezuela in November 2000. The grant protects the name Chuao and restricts its use to beans and cocoa products from that specifically defined geographical area, recognizing the influence of climatic and human factors on the quality of those products.

Criollo cocoa comprises just a fraction of the total cocoa production in Venezuela (only 3 out of every 16,000 tons of cocoa is criollo cocoa), and among the criollo, Chuao holds a very small share. Yet, the quality, reputation and characteristics of Chuao cocoa have made it a premium product and the region a hallmark, underscoring that the incomparable quality of this cocoa is essentially attributable to its geographical origin. The protection of the Chuao AO has proved to be a very effective tool for marketing and branding of the Chuao cocoa; the name itself denotes the unique character of the product, serves as a guarantee of quality and enhances consumer recognition.

The recognized quality and protection of Chuao cocoa allowed the Campesina cooperative to work out an agreement in 2000 with a chocolate company – Amedei s.r.l. of Italy – for supplying cocoa. Under the deal, Amedei receives the entire production of Chuao cocoa from Campesina. Campesina has benefitted from increased earnings from its product and from the chocolate company also having taken over the debts of the cooperative.

Following the agreement with Campesina, Amedei sought further protection for the name "Chuao" by registering it as a trademark through the Madrid system. The Italian company now is famous for its Chuao brand dark chocolates. Valrhona, a French chocolate company that used to produce Chuao brand chocolates stopped using the name after Amedei made the registration. Prior to the registration of the AO, "Chuao" was often used by some chocolate producers even though the cacao was not from Campesina. The AO protection has also reduced the instances of such uses of the Chuao name.

Recognition of the market potential of the special characteristics of Chuao cocoa and their protection through intellectual property rights (IPRs) have enabled the area’s farmers to increase their income substantially. Soon after the recognition of the Chuao cocoa as an AO, the Campesina cooperative had enough market power to negotiate with its customers and settle a price rate for Chuao much higher than what it used to obtain previously. The protection has led to an influx of foreign direct investment to the plantation, contributing to further wealth creation.

Success Based on IP Protection and Branding

Chuoa criollo cocoa is an example of how IP rights can be used by agricultural communities to generate wealth. The AO led to the creation of a trusted brand which helped chocolate producers and consumers differentiate Chuoa from other cocoa varieties. This differentiation based on higher quality and IP protected by IPRs enables traditional products to compete with mass-produced counterparts and thus ensures the sustainability of local rural communities and the preservation of traditional knowledge.