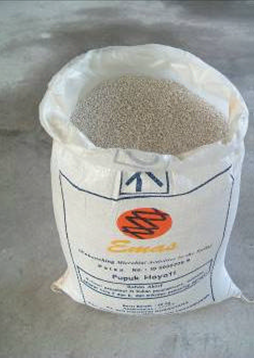 EMAS biofertilizer – in granular appearance – with a one year stability guaranteed (Photo: WIPO-ASEAN/IP/BKK/06/DRAFT)

Although Indonesia has devoted significantly large areas of its territory for plantation purposes, the soil quality in many of these areas remains questionable. The marginal quality of the soil – characterized by low levels of nutrients and organic contents, strong acidity and poor microbial activities – reduces the efficiency of conventional chemical fertilizers, because under humid tropical conditions, these types of soils are prone to losing fertilizers through leakage. This tendency represents an economic loss as well as potential environmental contamination emerging from the leakage of fertilizer.

A solution to the problem depended on finding a technology that reduced the release of fertilizer residues into the environment on the one hand, and enhanced the ability of plant roots to extract water and nutrients more efficiently on the other. In the early 1990s, the Indonesian government initiated a pilot scale project to develop a type of biofertilizer that would effectively reduce the dependence of conventional fertilizers commonly applied on marginally-suitable soils. The project was headed by Dr. Didiek Hadjar Goenadi, a soil science expert at the Indonesian Biotechnology Research Institute for Estate Crops (BRIEC).

Biotechnological studies have shown that microorganism-based biofertilizers can effectively induce microbial activities in the soil, which eventually increase plants’ nutrient uptake, stabilize soil aggregates (clumps of soil particles cemented together) and accelerate the decomposition of residual organic waste. The pilot project was conducted by the Indonesian Planters Association for Research and Development (IPARD), a consortium of state-owned and private estates that supports research on various agricultural and related products and technologies.

The research and development (R&D) pilot project under IPARD focused on “enhancing microbial activities in the soils (EMAS)” by developing a nutrient-solubilizing and aggregate-stabilizing biofertilizer (EMAS biofertilizer). A number of public and private research institutes collaborated in the project. Considering local production needs, all microbes used in the research are native to Indonesian soil. By 1995, a prototype of the expected EMAS biofertilizer was developed with Dr. Goenadi as the principal researcher and inventor.

The pilot scale production technology of EMAS biofertilizer was an intermediate step before embarking on a commercial scale through a series of technology developments. Prior to that, laboratory and green house experiments were conducted for five years by Riset Unggulan Kemitraan (RUK – incentive research programs undertaken by universities or R&D institutes in collaboration with private institutions).

The process for producing EMAS biofertilizer was patented in 1998 with the Indonesian patent office (Patent No. ID 0 000 206S). The patent is issued with Dr. Goenadi as the sole inventor. In addition to EMAS, he is also inventor or co-inventor of three other biofertilizer products.

The production technology of EMAS by Bio Nusa is under license of BRIEC. This product has been legally registered for commercial production and marketing at the Indonesian Department of Agriculture with registration number of G 798/BSP/X/2001.

The licensing of the EMAS biofertilizer has generated significant financial benefits for Dr. Goenadi and other stakeholders. By 2001, Dr. Goenadi was earning as much as Rp 150 million a year as royalties for his invention, and is expected to reach as much as Rp 400 million per year over time. The profits from licensing EMAS biofertilizer production is shared by the stakeholders: 10 percent of the total production value is received as a licensing fee, from which 40 percent goes to the primary inventor (Dr. Goenadi), 40 percent for labor support including co-inventors, and 20 percent for administrative purposes. 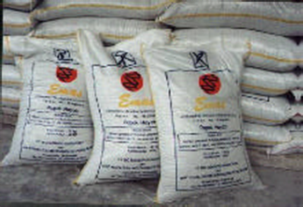 Although the benefits offered by EMAS biofertilizer were remarkable, it initially faced some constraints to access the market. Being a new product, doubts were raised about its effectiveness compared to conventional products. Therefore, a strong commercialization strategy for EMAS biofertilizer was developed by forming a company called PT Bio Industri Nusantara (Bio Nusa). Bio Nusa is essentially a consortium of several segments of PTP Nusantara, the state-owned plantation enterprise which was also deeply involved in the R&D of the EMAS biofertilizer. The company’s office is located in Bandung and a large-scale manufacturing plant is in Purwakarta, West Java, with a production capacity of 10,000 tons per year. Unlike chemical fertilizer, EMAS biofertilizer is only produced upon orders from users, since the EMAS microbes have a shelf-life of about twelve months.

The use of EMAS biofertilizer efficiently reduces the rate of conventional fertilizer dosage. It works for a variety of crops including rubber, tea, cocoa, sugarcane and oil palm. EMAS biofertilizer is believed to have the potential to save Indonesia’s domestic fertilizer costs by up to Rp. 1.5 trillion a year. Additionally, its bio-friendly characteristics ensure minimal environmental hazards. In 2009, Bio Nusa got its Quality Management Certification as proof that the management system operation complies with the requirements of ISO 9001:2000.

Dr. Goenadi received numerous awards including the “Satya Lencana Wirakarya Pembangunan” award from the president of Indonesia in 1998 and the Indonesian Intellectual Property Rights Award for the EMAS biofertilizer patent in 2001.

Responding to a socio-economic need through determined and innovative R&D was the main factor behind the development of the revolutionary EMAS biofertilizer. At the same time, the inventor and his colleagues realized that the ultimate success of their innovation lies in ensuring the proper utilization and sustainability of the product in the market place while rewarding the inventors for their efforts in developing the fertilizer. The patent protection of the EMAS biofertilizer and the subsequent business success ensured this reward.