Liquid Gold from the Agave 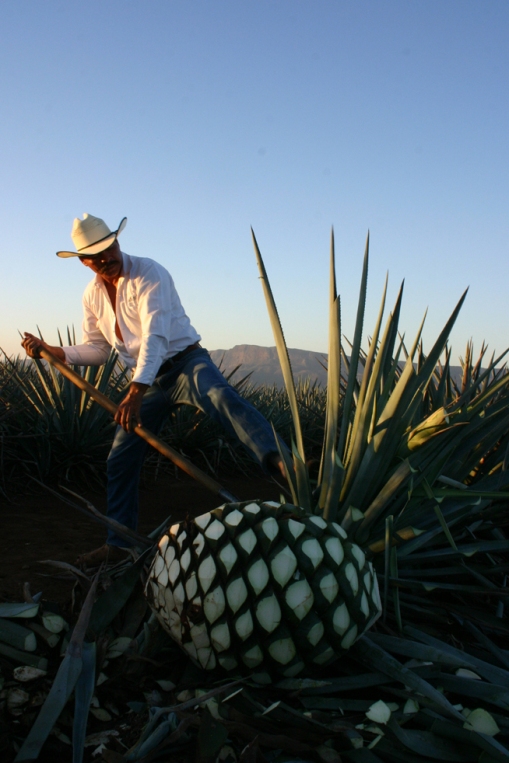 Tequila is distilled from the fermented juices obtained from the piña (core) of blue agave plants (Photo: CRT archives, taken by Carlos Tomas)

The red volcanic soil of the Mexican city of Tequila and its outskirts offers the perfect environment for plantations of agave tequilana weber (blue agave). The fermented juices obtained from the hearts of these blue agave plants are distilled to produce tequila, the fiery Mexican liquor, which takes its name from this city in the state of Jalisco where its production started more than two hundred years ago. While there are many types of agave, only blue agave can be used for tequila production. Famed for its smooth aroma, this Mexican liquor is highly coveted by collectors and connoisseurs all over the world.

Tequila producers are based within the surrounding areas of the town of Tequila. When the Spanish conquered Mexico in the early fifteenth century, they adapted “pulque”, an indigenous drink made from the maguey agave plant, into “Mezcal” spirit. The tequila that we drink today originated from further distilling of Mezcal. Most of the tequila production at present takes place in modern, well-equipped distilleries, although some tiny family-run businesses still retain traditional production methods without sophisticated machinery. However, the knowledge from years of experience of making tequila is passed on even to the modern distilleries.

Agave tequilana weber needs about eight to fourteen years to mature so that the piña (the core) is succulent enough for tequila production. The selection of the right kind of piña, cutting and roasting, fermentation, yeast addition and finally the distilling are all essential steps in the tequila-making process that reflect generations of gathered knowledge, experience and tradition. Traditionally, the piñas are baked for thirty-six hours before they are smashed to bring out the fermentable juice. The juice is then mixed with water and yeast and kept for fermentation – which takes approximately twelve days if it is done without any chemical. The fermented tequila is distilled at least twice to increase the alcohol volume to 30-40 percent. The aging process of tequila is unique and the length varies according to the type of the liquor being produced: “Blanco” (silver) and “Joven” (young) or "Oro" (golden) are least-aged and bottled within the first two months after distillation while “Reposado” (rested) is aged a minimum of two months. Mexican government regulations stipulate that all tequilas have to age for at least 14-21 days. Vintage tequila such as “Añejo” (aged) and “extra Añejo” (extra aged) are aged a minimum of one year and three years respectively.

Added to this unique process is the very artistic bottling style; producers use artisans to create crystal, ceramic, hand-blown glass or Talavera pottery bottles for their cherished tequila. There is a long tradition and culture inherently linked to the drink, the people producing it and the region where it is being produced.

Recognizing the value of the “liquid gold” from the blue agave, the Mexican government took initiatives to protect tequila as early as the 1970s. Tequila became the country’s first appellation of origin (AO) in 1974, and in 1978 it was internationally registered for protection under the Lisbon Agreement for the Protection of Appellations of Origin and their International Registration. The AO defines the area in which tequila can be produced, essentially the area home to the blue agave from which it is derived. Under the AO, selected municipalities within only five Mexican states can grow the agave and produce tequila. These municipalities were selected based on geographical factors (such as climate, altitude and soil characteristics) and human factors (the use of traditional techniques of producing tequila that have been passed on from generation to generation).

Further to the AO registration, the Mexican government holds all the rights over the use of the name tequila. 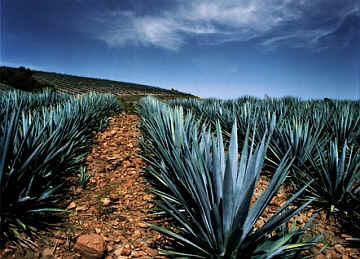 Along with the international protection, Mexico has also sought similar protection for tequila in other important countries and regions through a number of bilateral and multilateral agreements. Pursuant to Annex 313 of the North American Free Trade Agreement (NAFTA), Canada and the United States recognize tequila and mezcal as products originating from Mexico and, consequently, do not permit the sale of any product as tequila and/or mezcal unless they have been lawfully prepared in Mexico.

The Mexican government enforces the tequila IP through the Mexican Institute of Industrial Property (IMPI). The use of the name tequila is authorized and administered only by IMPI. IMPI may prohibit any unauthorized use of the name that may create confusion for the consumers, or constitute an act of unfair competition.

Despite protection under the Lisbon Agreement and NAFTA, tequila still faced competition from some “pseudo tequilas”. During the mid-1990s, as much as 3.5 million liters of these liquors were sold annually in Europe. The European liquors were produced from sugars of agave-like plants and were illegally labeled as tequila. Following the NAFTA precedent, Mexico entered into a bilateral agreement with the European Union (EU) concerning the mutual recognition and protection of AO in the spirits sector. Under this agreement the EU recognizes tequila and mezcal as “denominations of origin”, although enforcement has still been quite lax in Europe.

Mexico’s tequila protection interests were prominent during the Chinese accession negotiations to the World Trade Organization (WTO). In accordance with WTO accession regulations, in order to gain considerations for WTO membership, China had to sign bilateral agreements with all existing members, including Mexico. Since China has a climatic condition suitable for blue agave plants, Mexico was worried about rival pseudo tequilas from China. The Mexican authorities took the opportunity of the bilateral negotiations with China to ensure that the latter accepted tequila as a geographically indicated product.

The Tequila Regulatory Council of Mexico (Consejo Regulador del Tequila, CRT), established in 1993, certifies the production of tequila and helps to protect the image of the liquor taking action against “pseudo-tequilas” and counterfeit products. Through the AO protection, CRT has been able to destroy about 2.4 million liters of fake tequila within the first two years since the Council’s establishment. The CRT has successfully eliminated at least 86 fake brands of tequila.

The tequila AO is linked to the Mexican Official Standard for Tequila, which sets out product specifications and includes testing methods, quality control and labeling information. Along with the aging requirements, the government regulations also stipulate that the spirit must be made from 100 percent natural ingredients and contain at least 38% alcohol to be called “tequila”. Needless to mention, all tequilas must be made from blue agave grown and harvested only in the Mexican states of Jalisco, Guanajuato, Michoacan, Nayarit or Tamaulipas.

Tequila producers require two authorizations – for producing tequila and for using the tequila AO – which are issued by the CRT/ Ministry of Economy and the IMPI. In order to ensure the official standards, bottling or marketing of tequila is also regulated by the government agencies. The bottlers are required to follow certain compliance assessment procedures and obtain approval certificates from the CRT/ Ministry of Economy before they can go into operation and are obliged to file quarterly reports on conformity assessment. The CRT maintains three categories of bottling mark – national bottling trademarks (1102 marks), foreign bottling trademarks (196 marks) and certification trademarks (66 marks) to ensure the authenticity of tequila. The certification procedures are the key factor behind the success of the tequila AO. 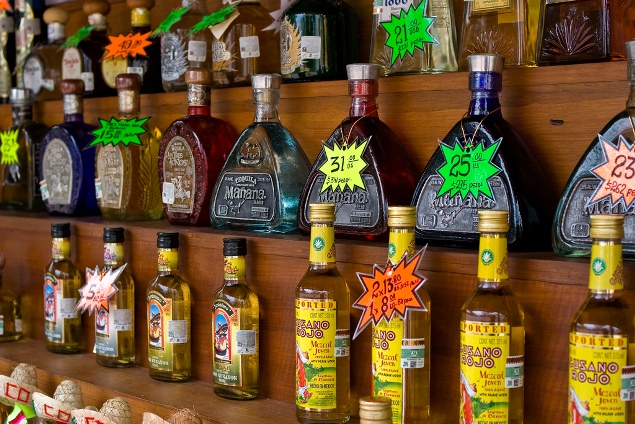 Tequila is marketed through strict regulations which classify all tequila under two broad categories with four types (silver, young or golden, aged and extra-aged) under each category. The first category, tequila 100% from agave, is made with 100% agave sugars and cannot be exported in bulk. The second category of tequila is made with at least 51% agave sugars and can be exported in bulked and bottled in other countries.

The tequila AO and the CRT certification proved to be successful tools for the commercialization of tequila. Along with national and international recognition, the consumers are assured of quality of tequila which increases consumers’ tendency to buy quality products. This, in consequence benefits the entire production chain.

Through IP protection, strong quality control and effective commercialization policy, tequila has undergone a transformation – from a regional drink of the people to a world-famous, sophisticated beverage. It is now being produced in an ever-widening range as product diversification aims at satisfying different tastes (for example, tequila made with 100 percent agave sugar and of different strengths and colors). The development of the product has also included a design element with an increasingly creative range of bottles and packaging. The commercial success of the tequila AO protection has encouraged similar protection for other traditional products such as mezcal and talavera.

As North America’s first distilled spirit, tequila was used mostly in margaritas and similar coctails for many years until it achieved worldwide popularity. With the expansion of global trade, tequila is now consumed all over the world. In 1995, Mexico exported only 64.6 million liters of tequila and tequila 100% (made with 100% agave sugar), which increased up to 136.4 million by 2009. Consequently tequila production has grown from 104.3 million liters to 249 million liters during the corresponding period. The United States is the largest importer of Mexican tequila, followed by EU countries.

For the people of Mexico, tequila is not merely a national drink, but also a unique symbol of their culture, tradition and environment. The worldwide popularity of the drink and subsequent rise in tequila prices have exposed it to threats arising from fake tequilas produced elsewhere. The AO has facilitated Mexico to retain its national heritage on the one hand, and to make a business out of it on the other.