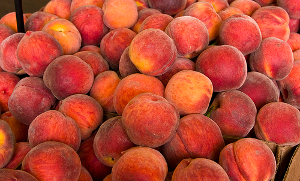 Seventy kilometers northeast of Beijing is the Pinggu district, which bills itself as the biggest peach farm in the world. With a growing area of over 6,000 hectares and an annual output of 270 million kilograms of more than 200 varieties of peaches in four major categories in 2009, peach plantations in Pinggu stretch as far as the eye can see. As of 2010, China is the largest producer of peaches in the world, with an annual output of over eight million metric tons. Combined with China’s long history of skillful cultivation and the unique geographical characteristics in which Pinggu peaches grow, they have become one of the most sought after peach types in the world. Providing employment for over 150,000 people, Pinggu peaches are also an important source of economic growth for the people in the region.

Peaches originated in China and have been cultivated there for thousands of years. The peach tree has special significance in Chinese culture, with it being considered to be the “tree of life,” and peaches are recognized as symbols of immortality and unity. Because of the Chinese people’s long history of peach cultivation and the important role it plays in their culture, they are ever more adept at growing the world’s finest peaches, which is clearly evident in the popularity and quality of Pinggu peaches. Many orchards in Pinggu have been around for hundreds of years, and growers have perfected techniques that capitalize on the geographical conditions of the region to make one of the most desirable kinds of peaches in the world.

What sets Pinggu peaches apart from those cultivated in other regions are their beautiful colors, high sugar content, unique flavor and large size. These characteristics are a direct result of the unique geographical properties of Pinggu. With mountains on three sides and plains at its center, Pinggu’s fresh air, low pollution, sandy soil, plentiful water supply and the marked difference between day and night temperatures make for ideal peach growing conditions. A growing Chinese economy brought increasing demand for Pinguu peaches, and by 2005 orchard owners were exporting them to over twenty provinces in China as well as foreign markets such as Brunei, the European Union, Russia Singapore and Thailand. The royal families of Brunei and Thailand are so partial to Pinggu peaches that they send their personal pickers to Pinggu each year to pick the best peaches.

The recognized quality resulting from unique geographical properties of Pinggu peaches mean that they can command a premium price. Zhang Yuan, a Pinggu orchard owner, pointed out that “In 2005, the price of peaches was about three to four Chinese Renminbi (RMB) per kilogram, but because we can grow much better peaches with a large size and high sweetness, the wholesale price has risen to about five to ten RMB per kilogram.” By 2010, Pinggu peaches commanded prices in Beijing of between ten and twenty RMB per kilogram.

Because most Chinese farmers are small, disparate producers that lack the capital and know-how to create brand names or undertake mass production or operations, the use of a geographical indication (GI) give them a chance to share the added value of brand names without necessarily establishing their own. Li Yuquan, chairman of the Association of Scientific Research on Zhangqiu Scallion, states that “The registration and use of trademarks and geographical indications of feature produce has become a key tool in increasing farmers’ incomes and accelerating agricultural industrialization.” Mr. Yuquan maintains that farmers from across the nation are seeing solid benefits through registering their produce as GIs.

The success of Pinggu peaches made possible by the region’s unique geographical properties prompted orchard owners and the government of Pinggu district to select Pinggu peaches as a candidate for registration as products of GI. Under Chinese law, GI registration is confined to a group, association or other organization, rather than an individual producer or trader. Such organizations must comprise of members who are native to the region that is specified by the GI. Therefore to register a GI for Pinggu peaches, orchard owners and the Pinggu government formed the Pinggu County Production and Distribution Service Center of Agricultural Products (PDSCAP). This alliance resulted in the Pinggu peach being the first agricultural product to have its GI registered in China in 2002. In 2007, China and the European Union (EU) signed an agreement aimed at protecting the GI status of certain agricultural products sold in each other’s markets. Ten products were chosen from China, and Pinggu peaches were among them.

The four main categories of Pinggu peaches sold include white peaches, flat peaches, yellow peaches and nectarines. Until PDSCAP was formed, commercialization of Pinggu peaches was mainly undertaken by the orchard owners and small enterprises, which totaled over 260 by 2009. Guo Lihong, an official with the Pinggu district Commission of Commerce, points out that after the Pinggu peach was registered as a GI product, the market value of the fruit increased greatly, both at home and abroad. To meet increased domestic demand, cut out the middlemen and shorten transportation from plantations to markets, Pinggu District set up twenty licensed wholesale outlets selling fresh Pinggu peaches in three major communities in Beijing. An agreement reached with Tai Nai International Fruits Co., Ltd. (Tai Nai) of Beijing (a major fruit distributor, importer and exporter) in 2009 provided Tai Nai with its own orchard in Pinggu to directly supply the company’s franchise stores with quality Pinggu peaches. To meet increased international demand, PDSCAP works with local orchard owners and companies such as Tai Nai to export and commercialize Pinggu peaches in major markets in Europe and Asia.

Registering Pinggu peaches as a GI has had a significant impact on the Pinggu region, its farmers and their families, and the reputation of fruit coming from China. The Pinggu government promoted the GI registration heavily both domestically and abroad. Following GI registration and the public relations campaign, the price of a Pinggu peach rose to a level thirty percent higher than others, while premium Pinggu peaches sell for double the price. Pinggu district exports over forty percent of China’s fresh peaches, and in 2005 its peach sales hit RMB 420 million, earning each of the region’s growers eighteen percent more than they did in 2004. As a result of the 2007 GI agreement with the EU, Pinggu peaches are now sold in over twenty-five countries in the EU for around five Euros each.

Registration of GI in China is a relatively new development, but it has already had significant positive results. Although Pinggu peaches were already well known and desirable, GI registration brought increased demand and a higher retail price for them, which in turn meant a better distribution of economic returns for producers. It has also increased the land value of the Pinggu region and has substantially helped the socio-economic development and sustainability of the region.