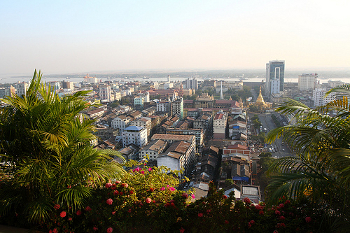 In cities such as Yangon, Nibban's products have brought easily accessible
electricity and TV service to the population
(Photo: Damien Halleux Radermecke)

With the introduction of many new electronic products such as fluorescent lights, refrigerators and televisions in Myanmar, demand for electricity has consistently increased since the 1970s. Many early products ran on direct current (DC) power, but electricity provided to residences and business was primarily through alternating current (AC) power. Adapters and convertors were available, but most were expensive imports and out of the reach of the average citizen. To meet the burgeoning demand for affordable adapters, Nibban Electric and Electronics (NEE), a small and medium-sized enterprise (SME) based out of Yangon, released its Paho Adapter in 1972. Providing consumers with an affordable and domestically made power supply, the product was a great success. The company followed up on the Paho Adapter with other products, such as voltage transformers, uninterrupted power supplies (used to provide emergency power), generators, inverters (used to convert DC to AC), battery chargers and television antennas. NEE’s reliable and affordable products have made it one of the largest suppliers of television antennas, inverters and related products in Myanmar.

NEE’s research and development (R&D) department strives to meet market demand through innovating new products that solve technical problems. The success of the Paho Adapter allowed the company to research new ways to provide a safe power source to their customers, and in 1975 it developed a high frequency DC/AC convertor. This was used to power fluorescent lighting and was the first such convertor produced domestically, with both a domestic and industrial version sold. In 1976, a new form of battery powered fluorescent lighting started to gain prevalence in Myanmar. Realizing that there was a desperate need for battery chargers, especially in rural areas, NEE developed the Paho Battery Powered Fluorescent Light and complementary Paho Battery Charger.

Televisions started to become prevalent in Myanmar in 1982, in conjunction with the availability of the first national television stations. Most televisions in the country were imported second-hand Japanese sets which ran on 110/120 voltage instead of the 220 voltage used in Myanmar. Seeing an opportunity to capitalize on the rising popularity of televisions, the company developed a voltage converter that allowed for the safe use of imported Japanese televisions.

NEE’s most popular product was developed in parallel with the rise of television in Myanmar. Large demand for televisions also brought similar demand for television antennas and in 1984 the company introduced its first television antenna, the Nibban TV Antenna. This high quality antenna was sold at competitive prices and eventually became the most popular antenna in the country. In 1994 a second national television station was launched and a new type of antenna was needed that could receive both stations. That same year NEE created a two-in-one antenna that could receive both signals. For optimal reception, antennas should be placed on building roofs, but this proved to be difficult in many urban areas, especially on high apartment blocks. To get around this problem, the R&D department developed an innovative antenna that came with a built-in booster, allowing it to receive both stations and mitigating the need for it to be set up on a building roof.

As Myanmar’s population and electricity usage increased, the country’s electrical infrastructure was strained. To cope, a quota system was implemented but shortages and blackouts were still common. Many people used generators to produce electricity for use when a supply was unavailable, however generators tend to be noisy and difficult to operate. In 2001, NEE’s R&D team developed DC/AC inverters, which can store just as much electricity as generators but are quieter and easier to use. The inverters have been very successful, and through them people have been able to have access to electricity even when blackouts or shortages occur.

As a result of these achievements, NEE continues to heavily invest in R&D in order to update its product line with more affordable and efficient versions, and to come up with innovations that meet the needs of the customer and market. Though there is no patent legislation in Myanmar, the company enters into non-disclosure agreements with its employees and partners to protect the company’s product designs and trade secrets.

NEE’s most important asset is its brand name, which is associated with quality and affordability. All of the company’s products are marketed under the Nibban brand name, which has helped build the company and given it a strong reputation. The Nibban name also stands for products that are made in Myanmar, which gives a more personal association between product and consumer than expensive imports. Prior to NEE products, most consumers thought more highly of foreign imports, but the Nibban brand name has built up trust and confidence in NEE’s domestically produced products. NEE promotes its brand name heavily through television and radio advertising, leaflet distribution, trade shows and sales promotions. All of these factors give the brand significant exposure and, built on its past successes, generate brand loyalty. The use of the Nibban brand name allows customers to quickly and easily distinguish Nibban products from its competitors.

Since the Nibban brand name is essential to the survival of NEE, its protection is equally important. Through the assistance of an intellectual property (IP) law firm, NEE has therefore registered trademarks for the Nibban brand name, and also for the Paho Nibban name, with the Registration Office of Deeds and Assurance of Myanmar. All of these measures ensure that NEE will have legal recourse should copiers attempt to infringe on its trademarks. 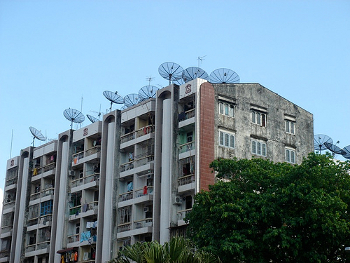 The success of Nibban antennas has helped to make television access
ubiquitous throughout Myanmar (Photo: Meghann and Paul Sheridan)

NEE currently produces four major products: the Paho Battery Powered Fluorescent Light, the Paho Battery Charger, Paho inverters and voltage converters, and four types of the Nibban television antenna. All of the company’s products are manufactured at its factory in Yangon and sold and nationally distributed through showrooms in Yangon and Mandalay, the country’s two largest cities. The company manages its production processes according to the standards set forth by the International Organization for Standardization (ISO), and in 2004 it received ISO 9001 quality management system certification. It also adopted the “5S” Japanese workplace organization methodology for its factory, which helped it obtain ISO 9001 certification and ensures the quality of its products.

Instead of focusing on simply turning a profit, NEE has worked under the philosophy that meeting the requirements of the market and providing products that enhance the well being of its customers should be the company’s main responsibility. By applying this philosophy to its business and protecting its strong brand names with trademarks, the company’s R&D and manufacturing efforts have paid off, as it is now one of the largest suppliers of products in its industry in Myanmar.

A Brand for Development

Increased access to electricity has a significant impact on economic development, and NEE plays an important role in this regard in Myanmar. By providing easily accessible electricity solutions, NEE can positively impact people’s quality of life. The company’s success has also been a positive example for other SMEs in Myanmar. It shows that with a strong brand name, domestically produced goods can be just as successful as imports from multinational companies.