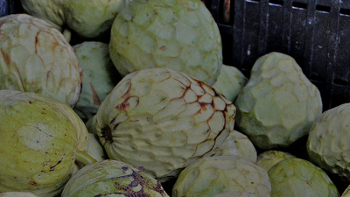 Chirimoya is a fruit native to the Andean region of Peru and Ecuador but that now also grows in Bolivia, Chile, Spain and the western United States. It was once described by Mark Twain as “the most delicious fruit known to men.” Cumbe is the name of a valley in the Huarochirí province of Peru where the climatic conditions (an annual rainfall of 600 – 1700mm, a mean temperature of 17- 22 C and a tropical elevation of 1200 – 2500 meters above sea level) are just right for growing high quality chirimoya. Chirimoya grown in these conditions are larger, have softer skin, maintain a low seed index (number of seeds per 100 grams of fruit) and have more nutrients than chirimoya grown in different climates. This has made chirimoya from Cumbe the highest quality and most sought after chirimoya in the world.

Goods with Specific Geographical Origin and Appellations of Origin

In 1997, Matildo Pérez, a peasant from a village community in the heights of Lima, decided to apply personally to the National Institute for the Defense of Competition and Intellectual Property of Peru (INDECOPI) for the registration of the trademark "Chirimoya Cumbe." Mr. Pérez’ application was refused owing to the fact that no exclusive rights in generic names can be granted to a single person. Unwilling to give up, Mr. Pérez appeared at INDECOPI again, this time with a delegation headed by the Deputy Mayor of Cumbe, seeking an appointment with the Head of the Distinctive Signs Office of INDECOPI.

The people of Cumbe had empowered Mr. Pérez (through a power of attorney) to register the “Chirimoya Cumbe” trademark. The community had understood that securing registration for the mark would give them exclusive rights in the use of the Cumbe name.

However, the INDECOPI official explained that "Chirimoya Cumbe" is in fact an appellation of origin, not a trademark. To be more precise, the word “Cumbe” is an appellation of Peruvian origin, because the valley of Cumbe is a geographical area that gives certain distinctive properties to the Chirimoya grown there. 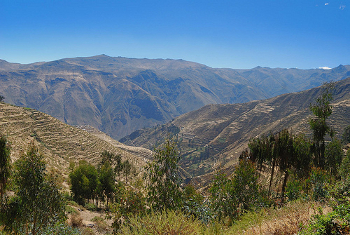 At the outset, the people of Cumbe who had gathered in the main square during Mr. Pérez’ meeting at INDECOPI were delighted with this explanation and went back to their village. The following week, however, they went to INDECOPI claiming: "We do not want an appellation of origin; our village does not want one because it is said that with appellations of origin the State is the owner, and it is the State that authorizes use, and that is why we are saying no. We do not want the State to be the owner of the ‘Cumbe’ name, because we have been working with it for a great many years. Since the time of our grandparents all have been investing a great deal of effort, and we are not prepared to ask you for permission to use our ‘Cumbe’ name." After an arduous and creative search for solutions, it was suggested that what should be registered was a collective mark, the owners of which would be the people of Cumbe and which would be used according to rules that they themselves would lay down.

Successful experiments with collective marks have enabled small businesses to reduce their costs and make them more competitive in the market. Through this mechanism, goods can be protected and distinguished at a lower cost, giving small producers the benefits of economies of scale while also increasing their clients' faith in the products.

Given that the cost of investing in the development of a mark, and also that of the marketing and advertising campaigns can be high, collective marks have become a cost-saving device which at the same time serve to distinguish products originating in an area which render them certain specific characteristics. Part of this strategy consists in developing a common concept and image which identifies the group or the products made by its members, and in concluding "quality pacts" which have to be implemented by means of the rules on the use of the marks.

Today the name "Chirimoya Cumbe" has its own characteristic logo and is registered as a collective mark in the name of the village of Santo Toribio de Cumbe (in Class 31 of the International Classification). Using this name, the villagers work to gain a competitive edge over their rivals in Lima's Wholesale Fruit Market.

The rules for the use of the mark relate to using only an elite seed collection, the cultivation process, an intensive selection and grading process, and proper handling, packaging and transportation of the chirimoya produced in the Cumbe valley. This makes them much more valuable than other chirimoya, which generally have irregular quality due to high infestation levels of fruit flies and inadequate packaging and transportation.

An important part of the value of “Chirimoya Cumbe” is the traditional knowledge of the growers in the Cumbe valley. They have been growing and harvesting chirimoya in the region for generations, and know how to use the unique conditions of the valley to yield the highest quality chirimoya. Local farmers now what genotypes give the best fruit in the region, what the best pest control and growing techniques are and know how to select the best quality fruits by merely glancing at their skin features.

The growers in the Cumbe valley have marketed their chirimoya under the “Chirimoya Cumbe” name since registering the collective mark in 1997 (renewing it in 2007). Primarily sold locally, 99% of the “Chirimoya Cumbe” produced are destined for the domestic Peruvian market. Of the 1% that is internationally marketed, most are sold in Europe, North America and Japan. Some growers have also increased the range of products sold, making things such as “Chirimoya Cumbe” jam, ice cream and cakes. Many regional supermarkets have also requested “Chirimoya Cumbe” to be supplied directly from the growers.

Until 2009 up to eighty percent of growers were selling to intermediaries. Recognizing lost potential, local growers formed the Association of Producers of Chirimoya Cumbe, allowing them to sell directly to customers without intermediaries, thus increasing their profit and allowing them to grow more and reach a larger market.

In specifying that only the members of a community - or someone else with due authorization - may use the collective mark, the Industrial Property Law not only protects native communities and gives them exclusive competence for the exploitation of goods bearing their name, but also marks out a framework for legislation on the protection of their knowledge. However, due to the limited resources of the growers in the Cumbe valley, legal recourse can be difficult to obtain. 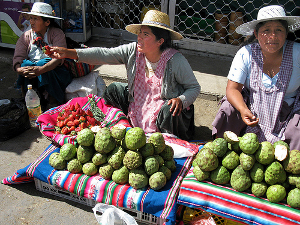 Chirimoya play a vital role in the economy of Cumbe
(Photo: Claudius Prößer)

Because of the high quality associated with the chirimoya produced in the Cumbe valley, “Chirimoya Cumbe” is marketed at prices of more than twice that of other chirimoya. Thanks to the persistence and drive of Mr. Pérez and his ability to make use of the IP protection system, his village has increased the value of its knowledge and tradition of excellence through capitalizing on the specific climatic conditions to make high quality chirimoya that is sought worldwide. It has also given the growers in the Cumbe valley the opportunity to build a strong brand image, create customer trust and have potential access to new markets.

The Value of a Name

The villagers of the Cumbe valley have been able to use a collective mark to their significant advantage. They were able to identify the values and characteristics of “Chirimoya Cumbe” that make it special amongst its competitors for its target market. The villagers realized that a group of producers may be able to achieve what independent producers could not possibly obtain, and therefore they organized together to register and protect the name of their common product. They achieved this through a cost-effective means, developed a common logo representing a quality product, expanded their target markets and increased the overall economic condition of the village. The many benefits brought from the registration of collective mark underscore its value, and is an excellent example of how a name can be used to help an entire community.