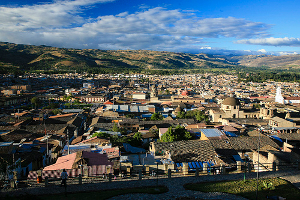 Of the 1.2 million tons of milk Peru produces a year, most of it comes from the Cajamarca department located 3,000 meters above sea level in the northern Andes. There are 30,000 registered milk producers in Cajamarca and over 503,000 liters of milk is produced each day, which makes Cajamarca the most important dairy and cheese-making region in the country. The most popular cheese produced is mantecoso, which is made from finely grinding a fresh curd known as quesillo with other ingredients. Both cheeses have been made by local dairy farmers for decades in rural Cajamarca. Local cheese makers sell their products in Cajamarca city through their shops or mini-markets. Cajamarca cheese has developed an exceedingly good reputation, especially among the many tourists traveling through and buying mantecoso and other locally produced cheeses.

In 1998, cheese makers in Cajamarca joined forces to deal with a growing set of problems they were all facing. They found it difficult to obtain quality quesillo, faced unequal competition from the informal sector (e.g., street vendors who do not pay tax or have the overhead of a store), had insufficient information about quality control, and their customers were demanding higher quality and healthier products. Determined not to let these problems overshadow their long history of quality cheese production, they decided to form a cheese-makers’ association. Thus in September 1999, a group of 39 small and medium-scale enterprises (SME) got together and created the Asociación de Productores de Derivados Lácteos (APDL), Cajamarca’s official cheese-makers’ association focusing on mantecoso cheese.

The APDL was formed after an intense campaign, and its members have agreed on the following common objectives:

After some initial setbacks mainly due to weak relationships between members and a lack of coordination, APDL applied to the National Institute for the Defense of Competition and Protection of Intellectual Property (INDECOPI) for a collective trademark, “Poronguito,” and it was granted in 2000. The collective mark represents a set of commitments APDL created to emphasize the quality of Cajamarca’s cheese products. 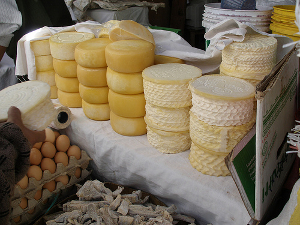 Cheese and the traditional knowledge of its production is vital to the livelihood of people in Cahamarca
(Photo: Thomas Quine)

The uniqueness of Cajamarca cheese, specifically mantecoso, comes from over 200 years of traditional knowledge. Farms in the region were initially very isolated, and farmers needed to increase the shelf-life of their milk. To do so, rural women processed the milk into quesillo, which could be kept for up to seven days. They then salted it and crushed it on a stone, which further improved the taste, texture and lifespan of the cheese end-product.

When manual mills were introduced in the region in the 1970s, the cheese could be further refined and produced in greater quantity. Combining this technology with their traditional knowledge of the right environmental and manufacturing conditions, the local dairy farmers have created one of the most popular cheeses in all of Peru.

The refined cheese made with manual mills and additional ingredients is sold as mantecoso, while unrefined cheese produced with stones is called quesillo. The dairies in the town of Cajamarca (the capital and largest city of the Cajamarca department) mainly produce mantecoso and the dairies in the outlying mountain regions mainly produce quesillo.

Official Cajamarca cheeses are mostly sold through farmer-run shops and in local markets. APDL works to facilitate the commercialization of all of its members’ products, and it specifically focuses on producer-consumer relationships and enhancing the image of members’ products and that of the region. The association also commercializes through the organization of fairs during the festive summer period. Besides cheese, APDL members’ shops also sell a range of other regional products (chocolate, honey, etc.), which build synergies between the quality of the cheese and other regional foods and amenities.

APDL also receives support in commercialization from a number of institutions in the cheese industry. Public bodies, private enterprises and NGOs back up producers through training, financial, technical and marketing support. 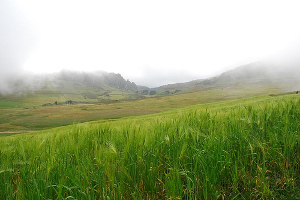 Cajamarca cheese and the Poronguito collective mark have generated a strong reputation through the APDL’s efforts. However, that reputation is causing producers from Lima and other cities in Peru to make use of the Cajamarca name and Poronguito collective mark to market products of their own. Because these producers do not have the know-how and resources that APDL’s members have, their products are usually of poor quality. Traders in distant coastal cities sometimes mix the original cheese with potato starch so they can sell a heavier weight, or sell it with false Cajamarca tags. This damages the reputation of genuine Cajamarca products, and in many cases detracts from the quality associations of the Cajamarca and Poronguito names.

This intellectual property (IP) infringement is difficult to counter, because most infringers are small stall or cart operations and it is also expensive to secure quality legal recourse. However, APDL has developed a strong lobbying capacity within the city council, which has helped it to counter the infringers to some extent.

Registration of the collective mark has allowed local dairy farmers to organize together to increase their market reach through building a name that resonates with the customers. Working together has given them new tools with which to market their cheeses, and local farmers who once only sold cheese as a means of subsistence are now running small businesses. Through their collective mark, advertising campaigns and incoming tourists, name recognition and demand have increased dramatically, with new specialty shops opening throughout Cajamarca. The collective action taken has increased business and economically benefited all of the involved dairy farmers and cheese makers.

The Link between Growth and Development and Collective Marks

The formation of the APDL and its collective trademark has given cheese makers in Cajamarca a positive product image and access to a national market. Taking the lead in creating and registering a collective mark, the cheese makers are an excellent example of how capitalizing on the important link between social capital, collective action and IP can contribute to the development and growth of an entire region.