The Emergency Autotransfusion Set (EAT-SET) is a device invented in 1989 by Dr. Otu Oviemo Ovadje, a Medical Doctor in the Nigerian Army, to resolve the problems arising from ruptured ectopic pregnancy. This pregnancy-related complexity, which is common in developing countries, often leads to internal hemorrhage, causing death of many patients. The absence of a well organized blood transfusion service is a factor in the increased morbidity and mortality in this group of women. The fatality can be reduced by procuring blood from laboratories, but many people in low-income countries cannot afford it. The EAT-SET reduces the hazards from internal hemorrhage through a medical technique known as autotransfusion. 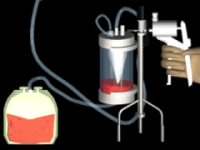 The EAT-SET device, invented and patented by Dr. Ovadje (OAPI patent no. 40893)

Dr. Ovadje’s research took place at a military hospital in Lagos. Understanding the need for an economical solution to the health risks from internal hemorrhage, he focused his research on finding an efficient way to reuse the patient’s own blood instead of depending on donors’ blood. His device, the EAT-SET, is designed to do exactly that. The autotransfusion process facilitates the recovery of blood from the body cavity during operations and then re-infuses it back into the patient’s body after a filtration process.

Its primary application is for patients with internal hemorrhage due to ruptured ectopic gestation, road accidents and so on. This re-infusion process is medically safe if the blood is processed within the first 24 hours after the occurrence of the hemorrhage. Since it is the patient’s own blood that is being re-infused, it not only is instantly available, but also prevents transmission of diseases, and avoids immunological complications of homologous transfusion. The device underwent initial clinical trials in Geneva under the guidance of the World Health Organization (WHO) in 1996, and since then has been tested in three Nigerian hospitals.

Dr. Ovadje started the EAT-SET project in 1989 with a meager sum of eighteen thousands Naira (approximately 120 US dollars). The Nigerian government supported the program by providing research facilities at the Military Hospital Ikoyi Lagos. The project also obtained support from the United Nations Development Program (UNDP) from the very beginning. The UNDP provided financial resources for research, development and testing of the project while the WHO participated as the executing agency.

EAT-SET Industries was established in April 2001 to facilitate the commercialization of the medical device. The company has already attracted several investors, both public and private, and the investments made so far have grown to almost 100 thousand US dollars. It is reported that investors are also willing to put in an additional amount of about one million US dollars in the company. Currently, EAT-SET industries is focusing on designing other appropriate medical tools for developing countries, which generally have limited capabilities for acquiring expensive, sophisticated technologies.

For Dr. Ovadje, creativity is a gift, and each invention contributes to the progress of humanity

With the help of UNDP, Dr. Ovadje acquired patent protection for his invention at the African Intellectual Property Organization, OAPI (patent no. 40893). Currently the EAT-SET device is protected by patents in nine African countries. The inventor also acquired trademark protection for EAT-SET in nine countries. Dr. Ovadje believes that the patents and trademarks held by EAT-SET Industries have played a key role in enhancing the confidence of the investors. He, however, believes that securing IP protection is not very easy for African inventors: “Most inventors in Africa lack the necessary funds to be able to pursue patents and trademarks. It is very expensive to process patent applications…Definitely there are… periods of loneliness and frustration which the inventor most necessarily go through. But I think these are some of the ladders you must climb to be able to push your creativity through”.

Until early 2006, an Indian company produced three thousand units of the EAT-SET device, to be sold at a retail price of 30 US dollars each. The product is being commercialized jointly by EAT-SET Industries and First Medical and Sterile Products.

The EAT-SET device has increasingly been receiving attention from all over the world. Lives of many patients are being saved by the use of the EAT-SET device. Prof. Denis R. Morel, Chief Medical Director of Geneva University Hospital said that he was “surprised by the efficacy of the device”, identifying the EAT-SET development project as one “which could potentially save a great amount of human lives”.

The establishment of EAT-SET industries and the subsequent growth of its business and financing demonstrate the success of Dr. Ovadje. The World Intellectual Property Organization (WIPO) and the Organization of Africa Unity (OAU) have recognized the invention of Dr. Ovadje. In 1995 he was declared the best African Scientist and was awarded the 1995 WIPO/OAU gold medal for scientific work designed to save women who usually die from abnormal pregnancy. He has also won a number of other awards including the Sasakawa Health Prize (2000) from the WHO, the World Bank Institute Award (2000), and J.P. Morgan Chase Health Award (2002).

The Key Success Factor: Focus on IP for Securing Investment

The EAT-SET case is an example of how strong IP protection can play an important role in attracting financing.

Strong IP protection provided an incentive to investors in the development and commercialization of the EAT-SET device. Dr. Ovadje’s success in making the EAT-SET project a reality will help many developing countries to save patients suffering from internal hemorrhage.