Successful Business Model through Partnerships and Smart Use of IP

William Gwata was a biochemistry student during the mid-1980s when he first thought about an automatic apparatus for cooking sadza (a cooked corn meal), the staple food in Zimbabwe. A country of 12 million people, Zimbabwe spends an estimated four million man-hours everyday for preparing meals. Mr. Gwata thought that a device that partially or wholly automates cooking sadza could contribute to significant productivity gains without compromising the quality consistency. He eventually came up with a prototype of such a device – the Gwatamatic – in 1996. 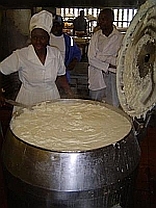 Sadza cooked by the Gwatamatic

Mr. Gwata was involved in a professional training at a hospital where he was impressed with consistent results generated by automated analyzer machines. The consistency was possible because of the electronic discipline of the machines operated by instructions stored digitally. He compared this issue with sadza cooking, where quality depends on many issues including the mood of cook, the amount being cooked and so on.

Mr. Gwata embarked on a mission to bring electronic discipline to the kitchen by reducing the sadza recipe to a digital code, and by eliminating the human labor part from the cooking process. The Gwatamatic sadza cooker has been developed to perform in a manner of consistency.

The machine is believed to be revolutionary within culinary engineering, one of its types in the world. It has a number of other advantages over the manual method of cooking sadza in terms of quality, convenience, hygiene, capacity and energy savings. The machine normally operates as a closed system from start to finish and has an accurate automated meal delivery system. It can produce sadza for 200 to 700 people within 45 minutes. 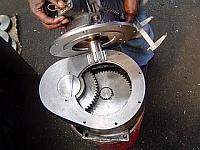 The Gwatamatic prototype was developed in 1996. The following year, Mr. Gwata successfully tested the device, and it was ready for commercialization. However, he realized that it was important to protect his invention before proceeding any further. Thus he contacted a law firm to assist him in filing a patent application to protect the invention. The major claim of his patent is a practical method of cooking based on a unique integration of hardware, software and philosophy.

The first commercial Gwatamatic rig was installed in the canteen of National Food Limited (where Mr. Gwata used to work) and had a successful maiden run on 13 December 1997. The apparatus was granted a patent in South Africa by the South African Patent Office in 1999, and by the African Regional Industrial Property Organization (ARIPO) in 2000, having effect in Botswana, Gambia, Ghana, Kenya, Lesotho, Malawi, Sudan, Swaziland, Uganda, Zambia and Zimbabwe.

Mr. Gwata relied on self-financing until the first commercial Gwatamatic rig was created. Later, his friends, family and a venture company became interested in his project. The venture investments from these sources led him to the establishment of a culinary engineering company named Algorhythm Private Limited. Soon, however, a careful choice of a business model considerably reduced the capital requirements for his company. He came to know about a “virtual business model” from an article published in the Harvard Business Review. Typically used by the IBM company, the virtual model relies on outsourcing the manufacturing tasks of different components of a machine (such as a personal computer) designed by the mother company (i.e., IBM). Mr. Gwata was inspired, and realized that that such a model can indeed facilitate him in reducing external financing. Following the same model, Algorhythm focused on intellectual property (IP) development, and outsourced the manufacturing and other business functions.

The main asset owned by Algorhythm Pvt. Ltd. is intellectual property in the form of engineering designs, both hardware and software designs. Manufacturing is devolved among several sub-contractors. The overall policy is for Algorhythm to be the only entity with the full “set of keys”. All subcontractors only have access to technical drawings relevant to the components they are making. All partnerships are standard, arms-length engineering supply contracts that start and end with a purchase order. While there are no formal licenses, good working relationships have evolved over the years.

Thus, while in the early days of the business funding was obtained through selling shares to friends, family and the venture capital company, now the main source of funding is progress payments on supply contracts. Progress payments are payable by the customer at different stages of the supply cycle. In terms of funding and support, governmental enterprise support institutions were found to be underfunded and/or disorganized, however, both the IP office in the Ministry of Justice and ARIPO were very helpful.

Algorhythm logo, registered at the Registrar of Trademarks, Harare.

Each product line from Algorhythm is expected to have its own brand identity. At present the trademark and the name of Gwatamatic as well as the Algorhythm logo are duly registered at the Registrar of Trademarks, Harare, Zimbabwe.

While the components of the Gwatamatic are produced by subcontractors, Algorhythm retains the IP rights to itself, and the rig is designed and commercialized by Algorhythm itself. The company commercializes the machine by highlighting the advantages of the Gwatamatic over the conventional methods of cooking sadza, which is lengthy, resource-intensive and often erratic. The machine is also available for rent on a monthly basis and charges apply every time the machine is used. 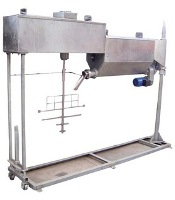 Gwatamatic rigs are already in use in institutional restaurants where large quantities of sadza are needed. A household size model to serve between 2 and 10 people is expected in due course. Additionally, Algorhythm is also assessing the prospects of producing vacuum packed sadza in plastic bags. Sadza is the staple food from the Sahara all the way to Cape Town, making a potential market of almost half a billion people. So exports of both sadza and the Gwatamatic are likely to provide significant long-term growth of the business.

The development of the Gwatamatic has opened the door to the possibility of digitizing and automating other items, transforming cookery from a haphazard, hit-or-miss art into a precise, logical science. The Gwatamatic already does this for sadza.

Successful Business Model through Partnerships and Smart Use of Intellectual Property

A creative idea paired with intelligent use of IP laid the foundation for Mr. Gwata’s successful business. The concept of the virtual company model focusing on the development and protection of IP not only reduced the funding constraints, but also ensured the sustainability of the business through informal and innovative partnerships.