Florencio Lazo Barra was trained as an architect, but took over the management of his family’s dairy farm in Chile after his father’s death. In the 1970s, as Chile started promoting its agricultural and forestry exports, Mr. Lazo decided to convert the dairy farm into orchards to produce fruit for the international market.

In 1991, the central Chilean VI O'Higgins Region was affected by a severe frost that did not spare Mr. Lazo’s fruit orchards: he lost 100% of his table grapes production and 80% of his plums. He also incurred high costs for the fuel of oil burners, which he used in the failed attempt to protect his orchards from the frost. That same year, he resolved to create a frost control method that would be both more efficient and economical than existing ones. “I swore that never again would I see my crops frozen”, recalls Mr. Lazo.

Side view of a fan and heater unit used in the invention and mounted on a platform or trailer attached to a tractor as included in United States Patent No. 5,934,013

One year later, Mr. Lazo tried to protect the orchards with a home-made system of bonfires using oil drums. While this first prototype proved to be ineffective, it still convinced him that heated air, when applied on the field in a special way with sophisticated aerodynamics, could create a temporary thermal barrier to frost. Mr. Lazo tested different options, including the possibility of using helicopters to mix cold air on the ground with warmer air higher up, and finally began experimenting with the application of hot air to the soil.

After four years of further experimentation, a first working prototype, the Lazo Frost Control Machine (“Lazo FCM”), was successfully tested in 1996. The Lazo FCM is a powerful centrifugal fan with a heater, which is trailed across the field by a tractor. Operating with four 45 kilogram liquefied gas cylinders providing fuel for up to five hours, the fans blow out hot air laterally from two exits and cover a distance of up to 100 meters at each side of the machine. The insertion of a layer of hot air in the cold air mass surrounding the plants protects fruits and vegetables from frost.

The main advantages of the Lazo FCM are its mobility (not a fixed installation), low operation cost (USD 5 per hour per hectare: at least three times cheaper than other systems), flexibility (ability to control both radiation and advection frost), environment-friendliness (use of propane gas) and effectiveness (creation of a lasting layer of hot air).

As soon as the Lazo FCM prototype had been successfully tested, Mr. Lazo applied for assistance from “Innova Chile”, a government agency to promote innovation (then called National Fund for Technology and Production Development [FONTEC]), and obtained USD 170,000 to convert his business idea into reality and produce more machines. “Within months, orders from Chilean farmers started coming in and I thought: this happens once in a lifetime. I won the lottery and the time to patent had come”, he remembers.

In 1997, with the assistance of an intellectual property (IP) expert, he began the procedure of obtaining a patent abroad. The United States of America were the first country to grant his invention a patent.

In Chile, patent No. 41776 was granted in 2002 by the Industrial Property Department for a machine to control frosts, which works with a centrifugal ventilator with two outlets, using a heater, and which moves around the fields mounted on an agricultural tractor. The invention is also protected by a patent in other countries, including Argentina, Australia, China, and the European Union.

The firm also has a trademark registered with Chile’s Industrial Property Department. 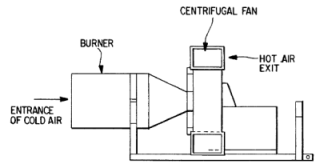 In 1997, Mr. Lazo started commercializing his technology in Chile. One year later, the Lazo FCM technology was exported to the United States by granting a manufacturing license to Agtec Crop Sprayers (now “Superb Horticulture”), who sold the product under the name “Lazo Frost Dragon”. In the first 3 years, over 500 machines were sold in South America and the United States.

In 1999, Mr. Lazo won the National Prize for Agricultural Innovation awarded by the Chilean Ministry of Agriculture. In the following year, sales and distribution started in Europe, through Agrofrost N.V., a company based in Belgium selling and distributing the machines throughout Europe under the “Lazo Frostbuster” name. More recently, the technology was also exported to New Zealand and Australia.

Mr. Lazo’s inventive spirit did not rest after the successful commercialization of his invention: based on the Lazo FCM, he started developing a thermal pest control (TPC) solution used to manage pests and diseases in agricultural production without pesticides. His unique and patent-protected TPC approach uses heated air to change the micro-environment of the crop and has been successfully tested on most fruit and vegetable crops. Today, non-toxic, non-chemical and environmental-friendly TPC technology is being pioneered by select growers in Europe, North America, South America, Africa, New Zealand and Australia.

While the loss of most of Mr. Lazo’s crop was an unfortunate event, it led to two groundbreaking inventions which have increased food security by controlling frost with an inexpensive solution, and reduced pollution through thermal pest control (TPC). Patents protect Mr. Lazo’s inventions and facilitate technology transfer via licensing agreements, which in turn help finance new innovation.