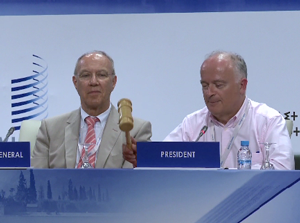 Negotiators from WIPO's member states at the Diplomatic Conference in Marrakesh reached agreement in the early morning hours of June 26, 2013, on the substantive provisions of a new international treaty to improve access to books for blind, visually impaired, and other print disabled people.

The treaty is expected to be formally adopted in the plenary session tomorrow, June 27.

The Diplomatic Conference to Conclude a Treaty to Facilitate Access to Published Works by Visually Impaired Persons and Persons with Print Disabilities, convened by WIPO and hosted by the Kingdom of Morocco, is meeting in Marrakesh from June 18 to 28, 2013.